By John Turney
Last year plenty of Bears fans wanted Quinn gone for the 2021 season and who could blame them? He'd just posted a 2-sack season after signing a  five-year deal worth $70 million deal (if contract and incentives were met).
However, this year, though 16 games,  he's set the Bears record for sacks and is leading the NFL in that category as well and is one sack away from tying his personal best (19.0 in 2013). It's quite a comeback. 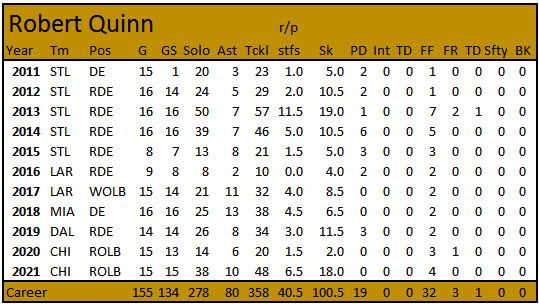 In terms of his career, his 18th sack took him over 100 for his career. However, it should be noted that in 2014 he was robbed of a sack because of an odd-scoring issue where he hit a QB behind the line of scrimmage and the ball went forward. The officials marked the ball errantly and the NFL game the Rams an explanation since the yardage could not be accounted for, the sack was not awarded. (You figure that out, we can't). So, we credit him with 101.5 and 11.5 in 2014.
In addition, he posted his second season of 18.0 sacks--since 1982 when sacks became official only Reggie White has done it more (three). Of course, pre-1981 there are others as well but that is a story for a different day. 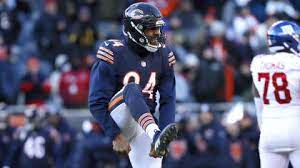 Quinn, when healthy was always a productive edge player, and though listed in recent years as an outside 'backer, he's a defensive end. He's got tremendous lean and for a decade has gotten underneath the best left tackles and put pressure on quarterbacks.
He's a hustler (his old line Rams coach Mike Waufle's favorite rush by Quinn is the time he got knocked off his feet and crawled to the quarterback). He's an end that usually is an arc rusher, but can go inside as well.
In 1984 Richard Dent set the Bears mark for official sacks with 17.5 and Quinn's 18.0 in 16 games breaks it and he didn't need the 17th game to do it.
Quinn made his third Pro Bowl this season (2013 and 2014) and he was a consensus All-Pro in 2013 and First-team All-Pro in 2014. he may get some more post-season honors this season as well, though DE/Edge is a crowded place and tough to beat out guys like Myles Garrett, Nick Bosa, and TJ watt among others. He may have to settle for the sack crown—it seems it's between him and Watt (who has two games to go as opposed to one for Quinn).
Regardless, he may not even get a lot of votes for comeback player of the year—Dak Prescott, Nick Bosa will likely get the majority of the votes and Dak will likely take that.
But voters take heed, Quinn should be in that conversation, even if it is in your own head as you fill out those ballots.
Posted by John Turney at 10:28 AM