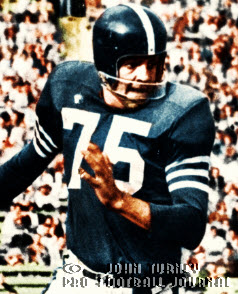 While being routed 42-0 by the  Los Angeles Rams on November 2nd, 1952, Hank Lauricella rolled left, then right and fired a jump pass into a crowd of Texans and Ram in the end zone and the ball deflected into the hands of HOF defensive end Gino Marchetti. It was the first of his NFL touchdowns—
The game ended 42-20 in favor of the Rams.
Marchetti would go on to score two more (in 1957 and 1963) on fumble recoveries when he was with the Colts as a defensive end. But as a rookie, he played both defense and some offense (and whore two numbers—75 and also 84).
Well done Gino the Giant, a heckuva catch!
Posted by John Turney at 7:20 PM