By John Turney
Every year the Hall of Fame announcement and the Super Bowl occur at nearly the same time. And since the Bengals and Rams are playing the discussions about players who deserve to be in the Hall and other such HOF questions will center around those teams.
We'll cover the quarterbacks here—Ken Anderson and Roman Gabriel. We've shown each of their career in modified charts from Pro Football Reference— 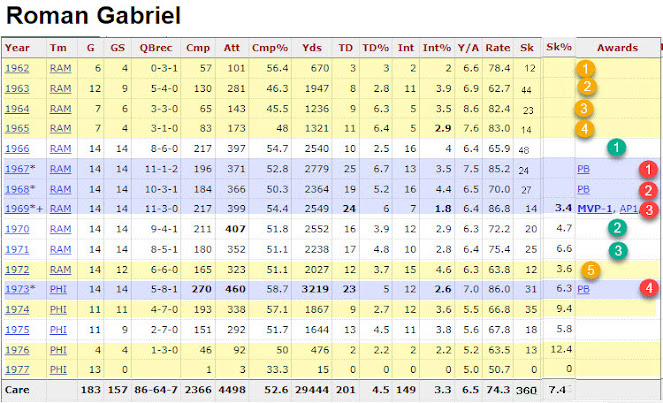 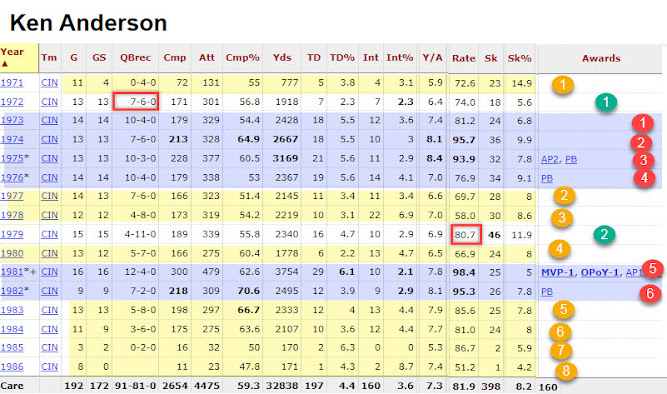 We've highlighted in blue seasons that were great or very good. Yellow is not that good, to be generous, and no highlight in somewhere in between.
In our opinion, Gabriel had 4 great seasons, three good ones and nine that were not HOF-worthy, for whatever reasons.
Anderson had six great seasons two decent ones and 8 non-HOF-type seasons.
Gabriel's "record" for great and good and so-so seasons is 7-9.
Anderson is 8-8.
Year-by-year
Gabriel's career began slowly, having to fight for playing time, and there was an knee injury in there as well from 1962-65. However his W-L record was 11-11-1 in 23 starts. All other Rams quarterbacks were 4-27-2. Think of that Gabe was .500 and everyone else was .151—and they saw QBWins is not a quarterback stat.
And the passing stats reflect a similar difference in Gabriel and everyone else—the bottom line is Gabriel was the Rams best quarterback but he was a starter just 41% of the time.
Anderson was 7-6 as a starter in 1972 so we gave him a "good season" mark.
Gabriel then went through his peak—1966-75, which had seven "above the line seasons" and four at or below the line.

In 1967 the MVP voting took place with a week to go and in the season finale against the player who won the MVP award, Johnny Unitas, Gabriel outplayed and beat Johnny U. decisively and won the NFL Offensive Player of the Week. The win knocked the 11-0-2 Colts out of the playoffs since they and the Rams both went 11-1-2 but the Rams beat and tied the Colts so they made the post-season. Had the vote taken place after that game and if the voters then had today's sensibilities there is a likelihood that Gabriel would have been the MVP.
Nineteen sixty-eight was a good year, Pro Bowl worthy, and then in 1969 Gabriel was the NFL MVP and getting the Rams a second Coastal Division title.
From 1970 through 72 Gabriel was a solid pro going 21-11-1 as a starter while fighting frequent injuries but missing just one game. He was top 3-5 in major passing categories and in QB wins. He did slump in 1972 and that, after some drama, led to Gabriel being traded to the Philadelphia Eagles.
In his initial season with the Birds, Gabe had an MVP-level season, though there was no beating O.J. Simpson for that award that year.  Gabe's record was a less-than-impressive 5-8-1 but that was with a team and was 2-11-1 the previous year and in 1973 there were a few games they should have won so a 7-7 record was not out of reach which is impressive for such a poor team.
Gabe slumped again in 1974 and had a minor comeback in 1975 where we gave him a middle-of-the-road grade on the season. In 1976 and 1977 he was a backup typical for that era.
Anderson, in 1973, began a four-year run where he was a top-flight quarterback in a league with some HOFers. . . Tarkenton, Staubach, Bradshaw, Stabler, Griese, Hart, been Bert Jones. 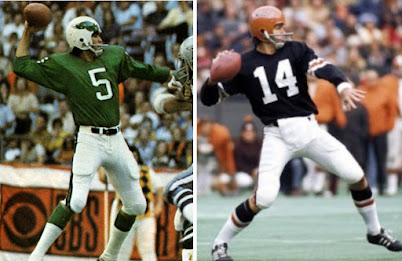 Among those Anderson was clearly a top-three QB in that span.
Then the doldrums hit. From 1977 through 1980 Anderson should have been continuing his peak but he didn't. He was 16th among his peers in passing yards, 21st in touchdown passes, 18th in QB wins, 18th in passer rating.
How could a top 3 (if not higher) quarterback go to maybe the 16th to 18th best? There were injuries, perhaps a lost of confidence. However, all players face those things. The truth is Anderson dropped pretty far down a hole.
Then, in 1981-82, he played at an MVP level and got the Bengals to the Super Bowl in 1981. In a league with Dan Fouts and Joe Montana, Anderson was likely the best, but no lower than 3rd.
From 1983-86, his finishing years he was 8-16 in QB wins and threw more picks than touchdowns. it was a typical post-peak decline, again for that era, similar to Gabriel's.
So, to sum up—each player has a case for the Hall of Fame but neither should be at the top of any list. There are many, many more so-called "non-skill" players with better cases. Blockers and tacklers (as Rick Gosselin calls them) are underrepresented in the Hall of Fame based on the numbers of them versus the number of skill players on a team—maybe as many as 100 short but certainly 50-75 or so.
So, while the prize is a Super Bowl win the talk of Anderson or Gabriel perhaps emerging from the senior committee as the nominee are slim. So the Rams and Bengals fans will have to settle for the Super Bowl ring this year if their team can bring it home.
It seems Anderson and Gabriel have been weighed, measured, and found wanting.
Posted by John Turney at 4:21 AM