Today PFJ looks back at the owner of the Oorang Indians, Walter Lingo, and his connection with celebrities. As the owner of the famous Oorang Kennels, Walter became friends with numerous celebrities, especially in the sports world. These individuals who had a love for dogs would sometimes visit Lingo in his hometown of LaRue, Ohio.

When the Oorang Indians joined the NFL in 1922 Lingo’s dogs were everywhere. “He sold thousands,” said Bob Lingo, son of Walter Lingo. “One year, which I had recorded, he sold 15,000. That was a peak year. That made the newspapers all over the world. I have several of those clippings. But he never took a salary. It was either feast or famine.”

Lingo’s dogs, and especially his Oorang Airedales, became hot commodities and his dogs really started to attract attention with celebrities around the country. “He got to be pretty good friends with President Harding. I remember that,” said Bob Lingo. “He had dinner with him on more than one occasion. I know Ty Cobb was one of his associates that he spent a lot of time with whenever he could. Jack Dempsey was there at the house on numerous occasions. Charley Paddock and Hoot Gibson, a famous cowboy singer. Big white hat, he was a rodeo and movie star. Some of them just came and went. There were there for a day on the morning train and left on the evening train. Some stayed (at Lingo home) and some stayed in Marion at the hotel. Then (dad) send a car over and get them” 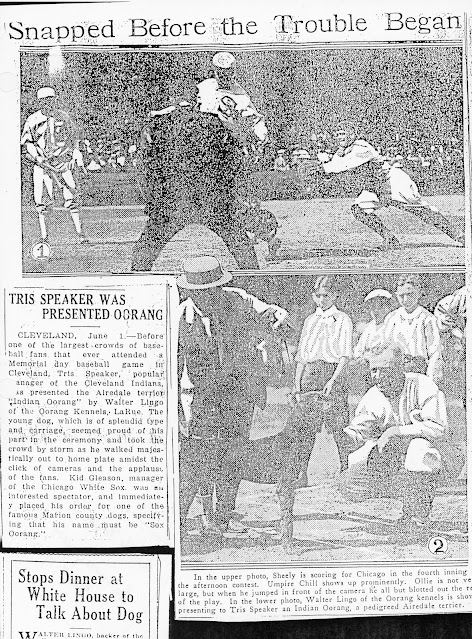 Celebrities were now a big thing for Lingo. He started mingling with famous people on a regular basis, with Airedales, hunting, and outdoor activity being the common interest. Besides Paddock, Gibson, Dempsey and Cobb, tiny La Rue saw the likes of movie star Harry Carey, baseball stars Walter Johnson and Tris Speaker, as well as Olympic champion and football star Jim Thorpe, who was playing pro football in the fall with the Canton Bulldogs during this time, just two hours to the east of La Rue.

Lingo would often invite Thorpe to go hunting with him in La Rue, showing off his Airedales to the former “World’s Greatest Athlete.” On September 16, 1921 as he was finishing his season playing minor league baseball as an outfielder with the Toledo Mud Hens Thorpe made one of his visits to La Rue. (Thorpe batted .358 in 133 games with 181 hits and 9 home runs with Toledo).

“Jim Thorpe, the famous Indian athlete of the Toledo baseball club, visited La Rue last Friday and spent the evening with W.H. Lingo behind a pack of Oorang coonhounds. The following day Mr. Thorpe and Mr. Lingo motored to Columbus where Toledo played a double header ball game with Columbus. Several members of the Toledo ball club spent Sunday afternoon and evening with Mr. Lingo at his Columbus home.”

Lingo would use his connection with the celebrities in his promotional material too. Champion Aviator John MacReady once purchased an Oorang Airedale from Lingo and stated “My Oorang Airedale would rather fly than anything else except hunt. He is a splendid buddy and guard.”

In September of 1934 Lingo hosted one of the most famous athletes in the world- Jack Dempsey.

“Last Wednesday afternoon, Jack Dempsey and party spent more than an hour in our village looking over the Lingo dogs, when selecting Pointers and Lingorues to add to his hunting pack. Jack, who is a great hunter of both big and small game, was delighted with the dogs he purchased here, and he expects to get a pair of Oorang Airedales later.

Jack Dempsey has a pleasing personality and was liked by all the La Rue folks who saw him. He gave a number of La Rue children new dollar bills, and otherwise made himself a pleasant and entertaining visitor.”

After leaving La Rue, Dempsey referred a wrestling match at Crystal Lake in Marion. After leaving Marion County the champion boxer went on to Chicago and refereed the World Heavyweight Wrestling Championship bout between Jim Londos and Ed “Strangler” Lewis at Wrigley Field.

Around Labor Day in 1939 Lingo hosted his good friend Jim Thorpe and his family. The La Rue News reported on the visit:

“The world’s champion all-around athlete, Jim Thorpe, whose Indian name is Bright Path, paid a visit to La Rue last Friday. Mrs. Thorpe and son John Robert Thorpe, accompanied Mr. Thorpe from their California home. Jim had traveled from the west coast to New York City to make a talk over a special radio program from the world’s fair. Jim and his family stopped in La Rue on their return home, to visit the Walter Lingo family and other old La Rue friends.

It will be remembered that in the years 1921 to 1924, Jim Thorpe and a large number of other famous Indians made their homes in La Rue. This was during the time they were associated with Walter Lingo in the Oorang enterprises of dog training and playing football in all of the large cities included in the National Football League.

Jim Thorpe still looks well and strong in spite of his many years of athletic activity. He is now in pictures at Hollywood and also does radio and lecture work. He has won for himself a leading name among the immortals in sports.” 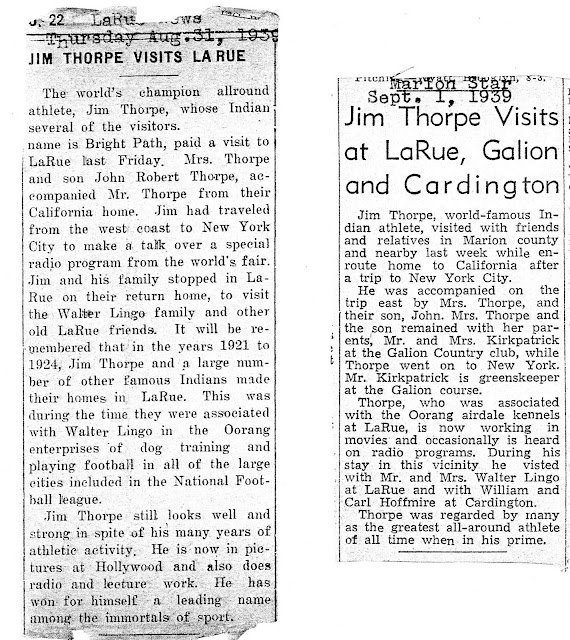 Along with the local press all of La Rue and the Lingo family welcomed back Thorpe with open arms. Walter’s son, Robert, remembers these visits by Thorpe with fondest memories. “Jim Thorpe and my father were very good friends, much more than business associates. Jim and his family would come back to LaRue and visit all the time, even after the team disbanded. Unfortunately, we lived in a rather small home and they would have to sleep on the living room floor, which was alright to them because we would fix it up the best we could. They liked that. I remember my mother getting up at the crack of dawn to fix bacon and eggs. I never saw anybody who could eat so much bacon and eggs in my life. It was a very close relationship.

Thorpe would play football with us all the time. Somehow the local boys and my friends always seemed to know when he was visiting. We’d go out to the big field and play all day. He’d show us how to kick the ball. I think he enjoyed being around the boys and we enjoyed being around him. One time I had a rather cheap child’s football and he kicked it pretty hard. It burst in half. I don’t know whether he felt worse or I did. Anyhow, he replaced the ball.”

Celebrities were a big part of the lore of the Oorang Kennels and Walter Lingo.