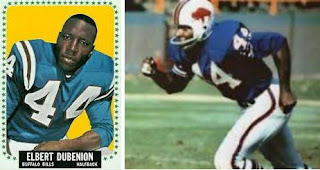 Elbert Dubenion still holds the record for highest yards per catch for players with 40 or more catches at 27.1—a mark that ma never been broken.
Flipper Anderson averaged 26.0 on 44 grabs in 1989 but it is really something of a relic, a pure deep threat.

We used to love these guys, 25-yards a catch, 22.0 yards a catch, anything over twenty was impressive. It's just one of those things that are gone forever. The closest we've had recently is DeSean Jackson, really.
Sure, today's players could do it but they catch way too many short passes and with coverages as they are teams pay a premium to stop the long passes to give up some yards on short passes.
So, here's to Golden Wheels Dubinion—The best of an extinct player—The Deep Threat. And mentions to Harlon Hill, Bob Hayes, Paul Warfield, Homer Jones and so many more.
What fun they were.
Posted by John Turney at 7:16 PM