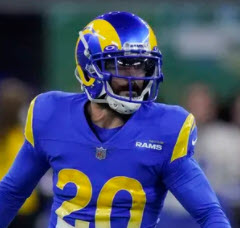 Has there been anyone to not play in regular-season but play so much and well in playoffs? Late in the 2021 season the Rams lost starting left safety to an ankle injury and then lost Taylor Rapp to a concussion. So, as has been reported with much fanfare, the Rams signed Eric Weddle who has not played in the NFL since 2019.
His regular-season stats will show zero games played in 2021, but with 4 games played (and started) in the playoffs. This is a first in our collective memory—and will be starting the Super Bowl as well (calling the plays, i.e. "wearing the green dot"). All unprecedented.
Couple that with being out two years and it is quite the story. We will triple check but we don't think there is a comparable story in the league's history—playing no games in th regular season and four (bu the end of today) in the playoffs.
Not only has Weddle made history, but he's also played well—131 snaps in the Rams’ three playoff victories, making 13 tackles.
It has also garnered a lot of pub as well as sort of a "Cinderella Story". Here is a Google search for his name this morning—