By John Turney
Richard Wood was a big-time collegiate player, a three-time All-American at USC (the first in school history). He didn't have great size (6-2, 224 or so) but was fast (4.6 forty) but he had good natural strength and hit,  "like a hammer" according to Coach John McKay.  He was part of national championships in 1972 and 1974 and eventually took his rightful place in the College Football Hall of Fame.
In 1975 the Jets took him in the third round of the draft and he was, at first, excited to go, "Batman is going to Gotham". And he started a handful of games for the Jets but mostly was a special teamer. However, as the year wore on Wood was not particularly happy with the Jets and in his heart wanted out. It was a team that lacked cohesion and he found it nothing like the camaraderie he became accustomed to at USC.
That chance to get out came.

The Bucs and his USC coach John McKay traded for him and he played the next nine seasons with the expansion Tampa Bay Buccaneers—the first six as a starter beginning as a right outside linebacker in a 4-3 defense, which may have been his best position.

In 1977 the Bucs switched to a 3-4 and he became an inside 'backer, and a good one. On his side he was often the "Will" 'backer when the right outside linebacker blitzed. In the Bucs scheme Wood was able to get penetration, often bu "backdooring"  blocker, getting into a backfield and making tackles behind the line of scrimmage.

In fact, no one had more in the NFL in 1978 and 1979 (29). From 1977-81, his five years as the starting weakside linebacker he averaged 114 tackles with 9½ of them run/pass stuffs.  The Bucs defense was solid every year anchored by Lee Roy Selmon and others with the strength of the defense the linebackers. The covered, they hit, tackled, could blitz and scrape—anyone from that era will tell you they were good. Very good.

In 1982 strongside inside linebacker Cecil Johnson moved to the weakside and Scot Brantley came in as the strong side player. This left Batman in the role as a backup.

He was not as good against the run as he had been and Brantly and Johnson were better in the base than Johnson and Woods. So, he sat and would fill in and play some passing downs. His NFL career was over.

Wood did catch on with the Jacksonville Bulls of the USFL in 1984 and played 16 games for them.

His NFL career arc was not unlike Hugh Green's or Jerry Robinson's. He was incredibly dominant in college but was very good for a while in the NFL before tailing off. Also like those two he's likely be good today in the $ (money backer) role so many teams use, a hybrid LBe/safety kind of guy who maybe lacks some size but has great smarts and quickness and plays in sub-packages roaming the middle or hook areas of the zones.

We could see him doing that like Green or Robinson or Michael Jackson (of Seattle) or Rod Shoate, Thomas Henderson, Woodie Lowie, or others. They were 4-3 linebackers in a 3-4 era.

Today, putting maybe 10-20 pounds on them, they'd be like Lavonte David or poor men's Derrick Brooks or a Seth Joyner from a past generation.

As it was Wood had a worthy career and was part of a really good, even great at times, defense. He may not have had the kind of NFL career as he had in college but what he did was pretty good.

Congrats to Batman. Not bad. 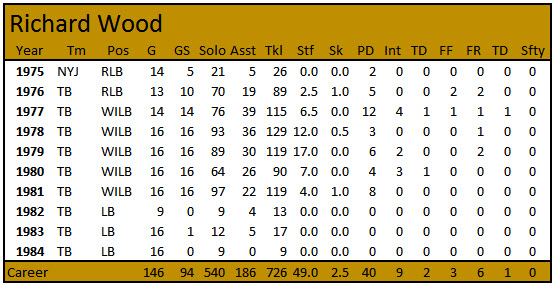