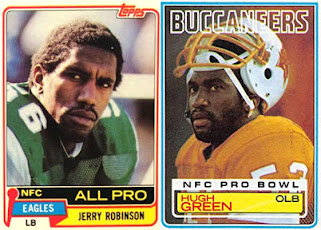 In my youth, there were two collegiate linebackers who struck my fancy for various, boring reasons not interesting to readers but nonetheless, I watched these guys as much as possible, rooted for them and when they entered the NFL there was an emotional vested interest in seeing them succeed.

But, given their college success, they didn't reach the pinnacles that were hoped for, though both had fine, worthy careers. 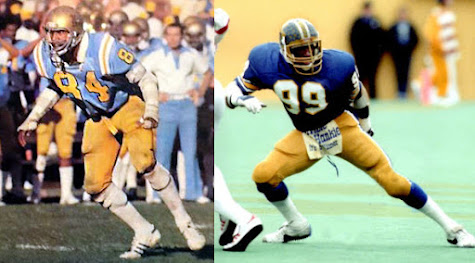 Robinson's career total of 468 tackles, set a UCLA record. He ranked first, second, and third in tackles per season with 161, 159, 147, respectively. The Downtown Athletic Club of New York named him Linebacker of the Year in 1977 and 1978. He was 10th in the Heisman Trophy vote that year.

In 1980, Green won several major college player of the year awards and finished second in the Heisman Trophy balloting, an amazing achievement for a defender in that era.  Green left the university with 460 tackles and 53 career sacks in his college career. John McKay said, "Hugh Green is the most productive player at his position I have ever seen in college".

Also in a parallel fashion both garnered All-Pro/ProBowl selection early in their career.

The issue for both players is that they were "tweeners" in terms of size. Both were undersized in the pros for their positions.

Robinson began as an outside linebacker in a 3-4 defense and it just was not suited for him. Had he come into a 4-3 system like in the 1970s or in the 1990s to now, he'd have been great. He had speed and tackling ability, but as long as he could have put on some weight—to 230 to 235 (he was less than 220 in college) he'd have been fine, like an Isiah Robertson in the 70s or a Seth Joyner in the 90s or a Lavonte David now.
In 1982 Dick Vermeil moved Robinson to inside linebacker, where again, though he did put on some weight, he was still undersized for that role. He played well, but the pounding wore down on him and he was less effective as the years went by, leading to the trade to the Raiders.
There is was a solid performer, a starter (after not playing much his first year there) but he was not a top or elite player as he was in 1980-81. In 1986 he was again effective, picking off four passes and in 1987, playing both outside 'backer and inside he had a career-high 4.5 sacks.
He was versatile but he was still a no-frills player someone who is on the field but just not making elite or impact plays year-in and year-out after those seasons. However, one note is that he did force some fumbles with the Raiders and ending with 22 for his career, a goodly number.
He ended his career, after 13 NFL campaigns with over 1,000 tackles and 14 sacks and those 22 forced fumbles and a dozen picks.

He may not even make the Pro Football Researcher Association's Hall of Very Good, but he was a fine player, just not the perennial All-Pro he might have been if he could have played in, say, Wilber Marshall's scheme with the Bears or maybe in Dallas or Washington (the three teams that stayed with the 4-3 in the 1980s).

As mentioned, Green was undersized as well. In college, he was a stand-up defensive end in a 5-2 scheme and was thought to be someone who might gain some weight and strength and be a smaller/sack master. In 1980 there was a Falcon weakside linebacker who was slightly smaller than Green (Joel Williams, 6-1, 222) who had 16 sacks. So, at the time while not ideal, it was thought Green would do the same or more.

However, in New York, there was a fellow named Lawrence Taylor who was 6-3, 243, and as a rookie was doing all the things Green was supposed to do and in 1981 it was L.T. who was All-Pro and the Defensive Rookie and Player of the Year.

Green was used as a blitzer some but was asked to do more coverage that Taylor. Partly because he had the skill set to cover but also because NFL tackles would just not be as challenged with Green and his 225 pounds as college tackles. So, as a blitzer, he was just not going to be an elite sack/pressure guy due to his lack of size though he was still an elite player in terms of all-around play

By 1984 Green was dealing with injuries caused by an automobile accident and in 1985 he had other issues. He became disgruntled with the team's regression and wanted out.

The Dolphins were all-to-glad to get Green. They were less than a year removed from losing the Super Bowl in large part because of defense woes, they were more of a well-coached hustle-type defense than one stacked with elite players.

Green totaled 5 sacks in his first 11 games with the Dolphins and all was set for a recharged Green. 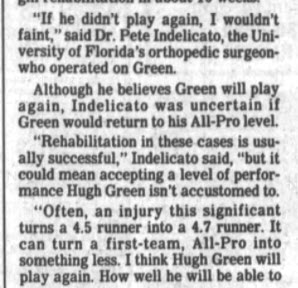 Dr. Indelicato was prophetic. Green came back but was just not the same. It was not until 1988 that he was able to become a starter again and now, like Jerry Robinson, he was a fine player but not what he was with the Bucs. He could still tackle, rush some, and was always (like Robinson) a fierce hitter but he was not going to be an All-Pro again, just as the doc said. 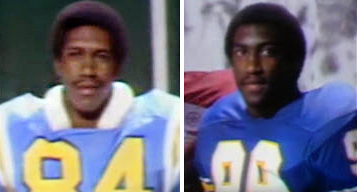 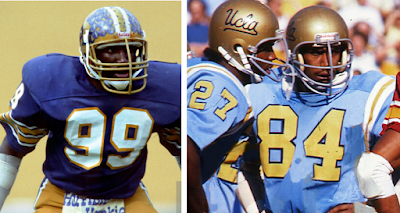