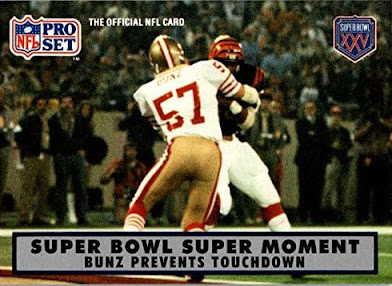 Dan Bunz was one of several keys to the 1981 49ers win in Super Bowl XVI. He was part of a goalline stand that helped preserve the win that began the 1980s 49er dynasty. It was likely the highlight of his career, a worthy career.

He had been a top linebacker at Long Beach State totaling 448 tackles there, including 172 as a senior.

In 1979 Bunz's surfer looks landed him a speaking role in North Dallas Forty, probably the best of all the football movies, a film adapted from Pete Gent's book of the same name. He played a young linebacker name 'Tony Douglass'.

As the Bill Walsh and the 49ers kept improving the roster and bringing in linebackers, especially role-playing linebackers (run stoppers for early downs and pass defenders and rushers for nickel) Bunz lost playing time and then injuries cost him more.

But really, aside from his moments of glory in Super Bowl XVI (being in on all four goalline plays including the solo tackle on Charles Alexander on a pass to the flat and being the lead tackler on the fourth-down play to end the drive), his contributions from 1981-83 were minimal.

However, in 1984, he won the starting "Buck" or strongside outside linebacker position (some schemes call it the SAM) and played well as the 49ers won their second title in four seasons. He came out of the game for Todd Shell in the nickel and for Jeff Fuller in the "Buffalo nickel" but on run downs he was there, turning in plays to the outside, jamming tight ends and doing his job.

Bunz, understandably was upset. A year earlier (prior to the 1984 draft) He turned down a lucrative offer to sign with the Philadelphia Stars of the USFL to stay with the 49ers because he was told he was part of their plans as their Buck linebacker.

Late in 1985 the Lions needed some help at linebacker and signed Bunz who in two games picked off a pass, but that was Bunz's last NFL action. The Lions waived him in May of 1986, prior to training camp and that was it for Bunz.

Yes, Dan Bunz was a worthy contributor. And that is enough. Two rings and one it could be argued the 49ers would not have had without his efforts.