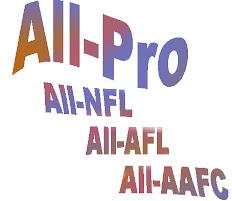 This issue has to be addressed by NFL fans and Hall of Fame voters and those who advocate for particular players for the Hall of Fame.

How to properly verbalize and normalize the All-Pro/All-NFL/All-AFL honors of the 1960s. To a lesser degree this applies to the 1946-1949 era when the AAFC and NFL were both major leagues of football just as the NFL and AFL were.

As we know at the end of each season the press and sometimes the press will poll players or coaches or executives to select "All-Pro" teams. But sometimes that verbiage All-"PRO" is a misnomer. Yes, we all use it as shorthand in writing and speaking and Tweeting, etc., but technically, it means picking from all the major leagues.

Football has used that term whereas basketball and baseball have used the term "All-Star" rather than All-Pro.

So, going to 1946, there were All-Pro teams that have players chosen from both the NFL and the AAFC. And there were All-NFL teams and All-AAFC teams chosen as well. 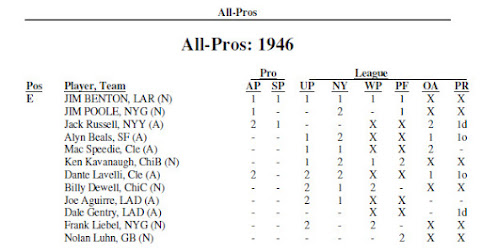 As can be seen, the AP and Sportswriters' (Chicago Herald-American) pick All-Pro teams. The United Press, New York News, Washington Post, Pro Football Illustrated, the Official AAFC team, and the Cleveland Press picked All-NFL and All-AAFC teams or both.
Thus, making the AP or Sportswriters' team was a tougher task than making the UP or other teams that selected from only one league. Think of it as making the American League All-Star team and the National League All-Star team—if a Major League All-Star team were chosen each year, from say, 1954-65 and you had to identify outfield positions, meaning only ONE centerfielder then in any given year Mickey Mantle or Willie Mays could be left out because one or the other had a better year.
Likewise, making All-Pro is tougher than making All-NFL or All-AFC.
Jump to the 1960s. The NFL and AFL had separate "All" teams for most of the years. It was not until 1967 when Murray Oldermann of NEA picked the first major All-Pro team of the AFL/NFL era and the following year other major organizations began to pick from both leagues. So, from 1960-66, in general, there were no "All-Pro" teams, just All-NFL and All-AFL teams.
As such, there were some players racking up amazing numbers, especially in the AFL, but there was also less "competition" for spots in the NFL as well. Who would have been the mythical All-Pro center in the mid-1960s Jim Otto or Mick Tingelhoff? We will never now. All we know is there were to-so-called All-pro centers but what there really were was an All-AFL consensus center and an All-NFL consensus center.
This matters because with so few slots coming up in the senior committee players were truly All-Pro (picked from all 26 or 28 teams) are going to have their "Alls" compared to players who had their "Alls" chosen from 16 (NFL) or 10 (AFL) teams and there is an inequity there than folks need to understand and to figure into any equations.
How to do that? Hard to say. Each fan and each voter and each pundit will have to work that out on their own. There is not a right or wrong way to account for it, we suppose, as long as it is accounted for in some way.
Incidentally, this goes for the 1960s NFL All-Decade Team and the All-Time AFL Team (the de facto AFL All-Decade Team). For that's we've suggested the NFL's official 75th Anniversary Combines 1960s team as the go-to, with plenty of deference to the previous teams.
This one picks from both leagues, it is official, chosen by an NFL-composed committee and when picking the best of the best does a better job than the teams chosen in 1969-70. Those are great for personal recognition, but for a time when there are only four slots in four years for seniors, this perhaps should be THE All-Decade team of the 1960s. 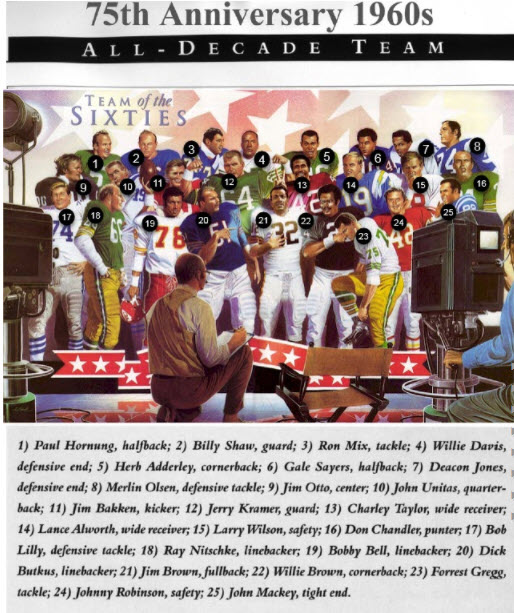 So, we can see that not all "All-Pros" are created equally. Careful attention needs to be paid when trying to separate the greatest of the great.
It must be that way when you may have 20, 30, or more qualified players for four slots. One must nit-pick. Not in a mean, vicious way, but in a fair way. A way that says (hypothetically), "Okay, both these guys were 1960s All-Decade picks but only one made the combined All-Decade 'Team of the Sixtes" let's at least consider that. It is a tougher honor to achieve".
It also may be fair to ask, "Were this guys All-pros really more All-NFLs or All-AFLs as opposed to All-Pros of the 1950s or 1980s?" Like that.
As we implored to the fans in a previous post All-Pros/Pro Bowls (i.e. "honors") are only ONE part of any given player's Hall of Fame resume, not all of it. There ARE other considerations—rings, stats, testimonials, various intangibles (among those could be the so-called 'he changed the game arguments, which, as an aside are usually false, but if really true could be a part of a HOF case).
But to the extent "honors" are part of a case, in a time of getting down to brass tacks, getting the definitions right and the meaning of All-Pro vs All-League right is only fair.
We are confident the senior committee is aware and has been aware of such distinctions, but have not been convinced that fans, advocates, and even younger or newer members of the Hall of Fame voting committee is aware of such things. We fear there are a few in the latter groups of fans and writers and pundits are part of a highlight generation that is led more by superlatives such as "he's a beast" or he was someone who "jacked up" opponents or he "changed the game" (while offering little evidence and not knowing that so-called change happened perhaps forty years earlier).
We wish the senior committee good luck. The vetting for the senior picks will be even higher and when they do pick, we fear even more than usual criticism will fall upon them if they don't pick players modern or younger fans are aware of.
However, we do think that those younger fans need to know the nuances of All-Pro, All-League, Pro Bowl, and All-Conference designations. Many of us grew up reading about such things and it became second-nature, but the highlight generation seems, often, oblivious of them. We hope this missive helps.
Posted by John Turney at 10:11 PM