Sports Illustrated's Paul "Dr. Z" Zimmerman suffered a stroke in 2008 and five years later the Pro Football Writers Association created an award in his honor which, in our view, is the de facto Hall of Fame for assistant coaches.

Howard Mudd was one of the four winners in the inaugural class. 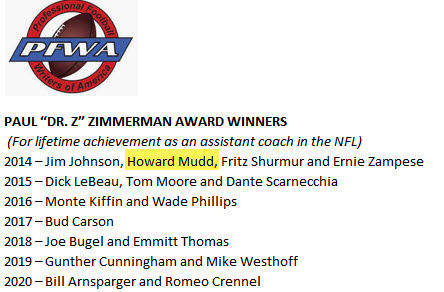 On July 29, 2020, Mudd was seriously injured in a motorcycle crash and today died at age 78.
Mudd was a ninth-round pick by the San Francisco 49ers in the 1964 NFL Draft and Mudd was a three-time Pro Bowler (1966-68) and was named First-team All-Pro in 1967 and 1968, with the latter being a consensus All-Pro season. In the middle of the 1969 season, Mudd was traded to the Chicago Bears for Rosey Taylor and a 1971 fifth-round pick. He was NFL All-Decade Team of the 1960s
After his eight-year playing career, Mudd entered the coaching ranks as an offensive line coach at the University of California in 1972 and in 1974 he was hired by the San Diego Chargers in 1974.
Mudd was on the staff of the Chargers (1974-76), 49ers (1977), Seattle Seahawks (1978-82), Cleveland Browns (1983-88), Kansas City Chiefs (1989-92) the Seahawks again (1993-97) then his notable work for the Colts' offensive line from 1998 through 2009 and finally the stint Eagles (2011-12).
Notable players he coaches were Russ Washington, Doug Wilkerson, Randy Cross, Keith Fahnhorst, Joe DeLamielleure, Doug Dieken, Cody Risen, Mike Baad, Dan Fike, Mike Webster, Dave Szott, Tim Grunhard, Keven Mawae, Ray Donaldson, Jeff Saturday, Tarik Glenn, Jason Peters, Evan Mathis, and Jason Kelce.
Mudd won a Super Bowl ring with the Colts in 2006.
In our view at PFJ he is on the short list of the best offensive line coaches ever. That list would include (and we are likely omitting a few) the following:
Howard Mudd
Nick Skorich
Jim Hanifan
Joe Bugel
Jim McNally
Hudson Houck
Alex Gibbs
Bobb McKittrick
Dante Scarnecchia
John Michaels
Jim Myers
Monte Clark
Dick Stanfel
Chuck Knox
Rest easy, Coach Mudd.
Posted by John Turney at 1:53 PM