Tom Flores is the Coaches Committee Candidate for the HOF 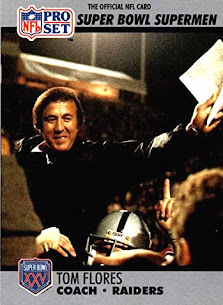 Earlier today HOF voter Rick Gosselin Tweeted that Tom Flores is the single coaching candidate nominee for the Hall of Fame's Class of 2021. He still needs to be approved by getting 80% of the committee as a whole in the annual meeting the day before the Super Bowl—but he will get the needed 80% and more in our view. He's a lock.

His credentials are that he won two Super Bowls as a head coach. He also did have a tougher route to success as a head coach due to being Latino in a time when racism existed in the NFL (and society) so that is something, he was able to overcome that and succeed. 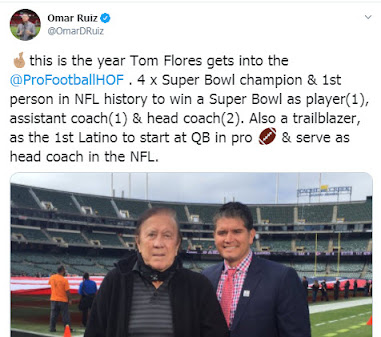 However, his Hall of Fame credentials do not include some of the things in the above Tweet by Omar Ruiz. Those are all fine achievements, but they are not why he deserves the Hall of Fame. he deserves the Hall of Fame because he was a good enough coach to win two Super Bowls, one as a wild-card playoff team in 1980. He did so with a backup quarterback (Jim Plunkett) who he had "quarterback whispered" back to full capability after having been beat up in New England.

We addressed that nonsense HERE. Sitting on the bench and watching Len Dawson and Mike Livingston quarterback the Chiefs does not mean you are a SB quarterback. Yes. technically true, riding the pine and gravy-training (a Jim Rome term) a Super Bowl ring is not a Hall of Fame credential. He contributed nothing to that team in any meaningful way.

This type of achievement being used as part of a Hall of Fame case is nothing more than resume padding. It is something nice to write in a bio but is not part of being a Hall of Fame coach, which he is getting in for being, not a combination player-coach candidate. Too many professional writers do not understand that concept, we guess.

"Also a trailblazer, as the 1st Latino to start at QB in pro American football & serve as head coach in the NFL."

Again, this is partially true, he was a pioneer as a quarterback and that is something tremendous, again to overcome bias in and industry that had plenty of bias. However, he was not a great quarterback. he was good—good enough to start six years in the AFL and to have a 23-11-3 win-loss record from 1963-66 and go to the AFL All-Star game in 1966. But his quarterback play cannot be considered part of his coaching record.

As far as being the first "1st Latino to  . . . serve as head coach in the NFL"—that honor goes to Tom, Fears who was born in Mexico to a Hispanic mother and was the head coach of the Satins from 1967-70. However, Flores is the first Latino to win a Super Bowl and that is a fine achievement but the "serve" part of Ruiz's claim is not really accurate.

On Twitter, many folks expressed anger that Flores was not chosen sooner that Jimmy Johnson and Bill Cowher got in ahead of him because they were "on TV". And that is a discussion for another day, there may be something to that. Maybe a lot.

However, the real issue is that while Flores had two Super Bowl wins, he also had a poor second act (Seattle) and that, in all fairness, has to be considered just as it had to be considered for Johnson (second act not what his dominance at Dallas was) and other two-super Bowl-win coaches like Mike Shanahan (third act-iffy), George Seifert (second act-bad), and so on.

It also had to be noted by the HOF voters (and should be by fans) that after the Raiders won the second Super Bowl in 1983 Flores's winning percentage as a head coach for the rest of his career was 44.3%. His 1984 and 1985 Raider teams, stacked with talent, we "one-and-done" in the playoffs those two years.

So, the full story must be told in these meetings of the voters, the highest vetting needs to take place for all of them. And this year Flores beat out fine candidates like Don Coryell, Buddy Parker, Shanahan, Seifert, and others based on the entirety of his coaching career.

So, Flores will be a HOF in February. He is deserving—two-title coaches deserve it. Flores has that honor and he earned it. And he did overcome more odds than others and that is a legitimate issue and regardless of is Flores was the first Latino to be a head coach or the second he was the first to win it all.

And this, to me, is the hidden gem: Flores won the Super Bowl twice with a quarterback who he himself rehabilitated and in a sense retrained. He did it with Seabiscuit, not Secretariat and he was the one who "whispered" Plunkett back to being a Super Bowl-winning quarterback. (And we hope no one is offended by the horse comparisons, but hey, those were two awesome equines.)

In the next three years there is room for Coryell, Parker, perhaps other champion or innovative coaches like Holmgren or Shanahan or Seifert, et al but this year it is Flores and because of his REAL, not imagined and puffed credentials, he is the nominee and that is how it should be. He's not a true Super Bowl-winning player in the sense of the meaning of that term, he's a two-time Super Bowl winner with a quarterback of his own making who did falter late in his career but with the Raiders he was a HOF coach.