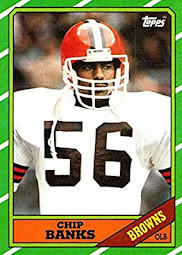 In 1981 Lawrence Taylor took the NFL world by storm, winning All-Pro honors, Defensive Rookie of the Year honors and the AP Defensive Player of the Year Award while playing a big role in the Giants getting to the playoffs for the first time in forever.

In the 1982 NFL Draft Chip Banks became a coveted target because he was said to possess the same skills as Taylor—of so it was thought.

The Cleveland Browns took him with the third overall pick Banks was, like Taylor, awarded the NFL Rookie of the Year Award and was a  Pro Bowler.

He played the left side of the defense, and sometimes had more coverage responsibilities, but though Banks was not in the L.T. class he was a valuable player who had a fine career.

However, Banks developed a reputation as someone who wanted special treatment. The LA Times put it this way—

In 1985 Banks was traded to the Bills for the rights to Bernie Kosar but Banks refused to report and the Browns had to give up a first-rounder to replace him. Banks told the clubs he'd "rather retire" than play in Buffalo.

Banks had two more Pro Bowl seasons and again, the Browns traded him. In April 1987 the Brown sent Banks to the Chargers with a swap for first- and second-round picks by the two clubs. The Browns sent late-round picks (#24 overall and #53 overall) plus Banks to the Chargers and in return received the #5 overall and the #32 overall. Using today's NFL Draft Value Chart that means Banks was valued as a high first-round (in the #12 to #14 overall range).

In San Diego Banks paired with Billy Ray Smith who was the left outside linebacker. This meant Banks had to be moved to the weak side for the first time in his career and he played well enough but didn't seem to generate the pass rush the Chargers desired. He was voted (along with Smith) Second-team All-AFC.

But in 1988 Banks held out demanding a $300,000 reporting bonus for the 1990 season, even though ti was not part of his contract. Banks told the Chargers if he didn't get traded he'd retire. 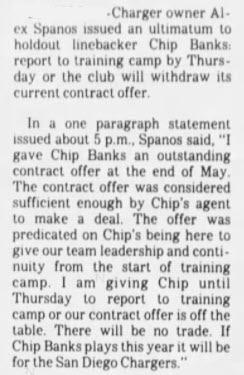 So, as a result, Banks didn't report and sat out the 1988 season. In the meantime Banks got into trouble with the law, being arrested more than once for possession of illegal drugs and then in January 1989 was arrested with and other more serious charges.

Banks pleaded guilty to the drug charges and was placed on five-year probation.

Spanos had seen enough (three drug-related arrests in five months) and tried to trade Banks. A fourth arrest in June 1989 further inflamed the matter. In October a Fulton County (GA) judge sentenced Banks in the last arrest to play a fine fo 10% or his salary over the next three years and 5% of his salary for the two years after that to drug rehab programs in Atlanta. 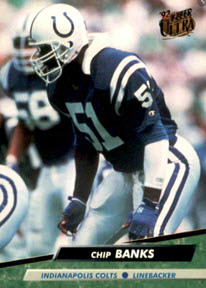 The NFL gave Banks a "second strike" in their discipline program (a third strike would have resulted in a lifetime ban) and in late October Banks was traded to the Colts where he secured a starting job in his second week in Indianapolis. It was a conditional trade and the Colts had the option of giving the Chargers a 1990 third-round choice or a 1991 second-round pick. The Colts chose to keep the 1991 pick and send the 1990 third-rounder to the Chargers for Banks.

Fortunately for Banks there neve was that "third strike". In fact, he was a solid ballplayer for his last four years in Indianapolis. In 1990 he started all 16 games and led the NFL with 13 run/pass stuffs (tackles for loss) as a strong-side 'backer for the Colts.

Banks was hurt in 1991 with a sprained knee and that season was not without drama. In October Banks was pulled over on a traffic stop and the police found a warrant that should have been canceled and arrested him. He spent 5½ hours in jail but was released when it was found the Georga judge on his previous case failed to cancel the warrant.

In 1992 Banks had a good final season with 9 sacks and five stuffs. He was posed to play again in 1993 but he injured a shoulder and was placed on injured reserve. 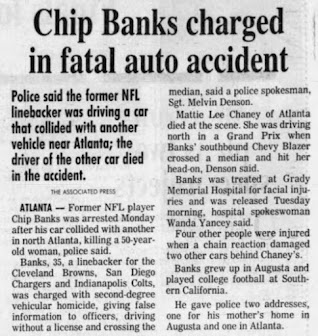 Two weeks ago Banks was shot in Atlanta. Banks was reported to be in "serious" condition but is  "improving" according to recent media releases.
So, while his off-the-field efforts are not what one might call "worthy" on the field he did some great things. Five times he was Second-team All-AFC or higher in the "honors" category in 1990 and 1992 he was on a Pro Bowl level in terms of production.
So, while if he had made better choices dealing with his addiction disease he might have been even more productive, but all humans make mistakes, and as Rick James said "Cocaine is a helluva drug".
We wish Banks the best in his recovery and recognize he was a very good player for most of his career.  He was rangy and could run and had long arms, useful in a pass rush and in coverage. He was usually over the tight end and could jam or cover those players. Had be been asked to rush all the time he would have totally many more sacks but he had to do several things (mich like Billy Ray Smith who we posted on yesterday). He was a complete 3-4 backer who cared about getting into the backfield and tacking a running back as much as pinning his ears back and going after the quarterback.
Get well soon Mr. Banks.
Posted by John Turney at 10:27 AM