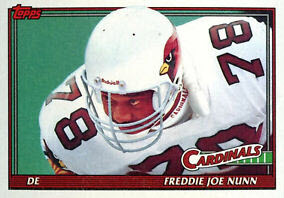 As we've posted before there are really good players who don't get a lot of mention years after they retired. Some players vie for Hall of Fame slots, others are what might be called "Hall of Very Good" players but some are just good players who didn't gain many accolades.

Nunn was mostly a defensive end at the Univerity of Mississippi where he totaled 301 tackles with 123 of them coming as a senior. His "measurables" for the NFL Draft were 6-4, 233 pounds thus he was small for a defensive end but he ran a 4.5 forty-yard dash which could compensate from some lack of size in the minds of scouts, perhaps like Fred Dean did.

The St. Louis Cardinals, one of only four teams in 1985 that were going to play a 4-3 defense selected Nunn in the first round (18th overall) of the 1985 NFL Draft.

As a rookie, he won the starting weakside linebacker position meaning he was usually stacked behind the line of scrimmage and flowed to the ball since the Cardinals almost exclusively played an "under" front defense. Nunn was a good enough athlete but that position left him off the field in nickel/dime situations.

In 1986 the Cardinals switched to a 3-4 defense and this moved Nunn to the left outside linebacker position and in nickel allowed him to be the left defensive end with Al "Bubba" Baker the right end in sub defenses.

The following season, 1987, brought a change back to the 4-3 defense and Nunn, now 260 pounds was the left defensive end for the next four seasons even making Second-team All-NFC in 1988. Those four seasons Nunn averaged 45 tackles and ten sacks and five stuffs.

In 1991 Fritz Shurmur was hired by Joe Bugel to replace Joe Pascale as the Cardinals defensive coordinator. With Shurmur came a 3-4 scheme putting Nunn back as the left outside linebacker in the base defense and also left end in the nickel.

His first season back as the left outside 'baker he totaled 63 tackles with 7 sacks and 7 stuffs and forced six fumbles. In 1992 he injured his knee and missed five games, the first time he'd missed time other than the 1987 strike games and a four-game suspension in 1989 for violation of the NFL's drug policy.

In 1993 Shurmer moved more to his "Big Nickel" scheme that they used more than their base. It was four defensive linemen and two linebackers and a safety playing one of the linebacker positions who and that player could also play the slot. Shurmur used it in 1992 as well, but much more in 1993.

In this scheme, Nunn flopped sides, always player the weak defensive end rather than staying on one side. The idea was to not have Nunn deal with the tight end side and would free him from getting chipped and thus allowing him freer access to the quarterback. He started ten games and was a nickel rusher in the other six and had 6.5 sacks with three forced fumbles on the year.

Nunn also began to have legal issues. In May of 1993, he was involved with a standoff with police in Phoenix and barricaded himself in his home in a 4½ hour saga in which he finally surrendered and was charged with misdemeanor assault. At the time he had two other charges pending involving misdemeanor assaults in tow other cases in the Phoenix area.

In May of 1994, when he was a free agent, Nunn was held in a fatal shooting case in his native Mississippi. According to reports, a manager of a convenience store came out of his establishment with a gun attempting to break up a crowd that had gathered outside. The manager and Nunn both fired, though reports didn't confirm who fired first. Nunn reportedly told police he had fired his gun in self-defense.

The day after his arrest he was released by authorities and three months later a federal grand jury returned no true bill, essentially finding that the shoot was justified or there was no evidence that it was anything other the self-defensive shooting as Nunn said it was.

However, a couple of weeks before that there was this incident— 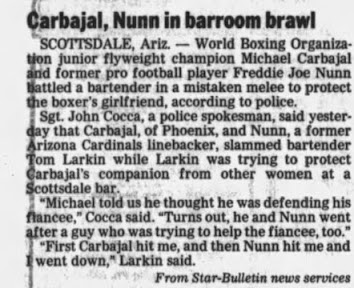 A month later Scottsdale police said no charges were being recommended.

In September the Indianapolis Colts were hit with injuries on the defensive line and signed Nunn and Al Noga to fill those holes. Nunn started at left end in Indianapolis and was used as a nickel rusher as well an got his first taste of NFL postseason action as well.

The Colts saw enough that they signed him to another one-year deal in 1995 and that season he was a handy backup before he had a hamstring injury. In 1996 the Colts brought Nunn back for another season and it seems the Indiana media had taken a liking to Nunn who was paired with Richard Dent in passing situations in the preseason and early in the year. —

After four games in 1996 though Nunn was cut, then re-signed, then cut again then resigned but he never saw game action after those first four games. Dent, though had a good year as a nickel rusher playing all 16 games and making 15 tackles, 6.5 sacks, forced two fumbles, and even scored a safety, so that half of the "Defensive of the Ages" worked out well.

The troubles for Nunn didn't stop after his career. In 2001 he was pulled over by a Texas state trooper over for a routine traffic stop and found 400 grams of cocaine in his car back in 2001. Trial evidence included that Troopers found Nunn had "30 pounds of cocaine valued between $600,000 and $1 million hidden under a false floor." Additionally, an FBI agent testified about a lengthy investigation of a drug-trafficking ring Nunn was linked to.

Seven years later, in 2008 a Gray County jury found Freddie Joe Nunn guilty on charges of possession of a controlled substance. and was then sentenced to 20 years in prison on drug trafficking charges.

Nunn did appeal but the appeals court upheld the conviction.

One has to wonder if Nunn wouldn't have made more NFL noise if he had just been put at defensive end and left there, without all the moving around. We will never know, but nonetheless, Nunn was a fine player who yes, deserves credit for a career worth mentioning.

Yes, a flawed individual (as many were and he has/is paying for that as he should) he did produce in the NFL in a variety of schemes and it is only fair to take a look back once-in-a-while and see the good.