Billy Ray Smith, Jr. was the son of a fine NFL defensive tackle, Billy Ray Smith Sr. but he was one of those good players who sometimes doesn't get remembered as often as he should

Smith was selected fifth overall in the first round of the 1983 NFL Draft by the San Diego Chargers. He was one of those athletes who tested well physically in terms of what was then known as "triangle numbers"—size, strength, and speed. For that era, he was a good-sized outside linebacker with good speed:  6-3, 242, 4.65- forty but also had brains (reportedly tested by one NFL team as having a 120 I.Q.)

At the University of  Arkansas, Smith was a two-time consensus All-American selection (1981-82) as a defensive end (he began as a linebacker at Fayetteville) and finished his career with 299 total tackles with 63 going for losses).

Here is Smith at LDE in a long-yardage situation in 1983 versus Washington. The interior line is in an "Eagle" front and this presents, essentially a five-man defensive line. 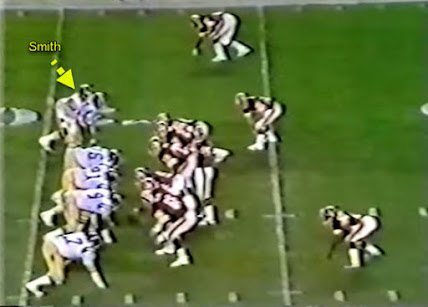 This is Billy Ray in his usually strong-side inside linebacker in the Charger 3-4 scheme. 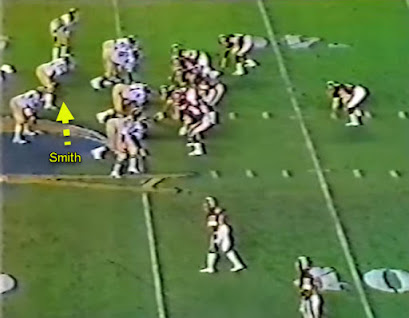 Again, here in 1985, Smith in the Charger base 3-4 at the strong (Mike) inside linebacker spot.

Smith was a solid player inside (usually he was first- or second in tackles on the Charger defense) but it was 1986 when he moved to a more natural position that he began to really shine.

In 1986 Smith moved to left outside linebacker and additionally, the Chargers played quite a bit of "Bear" fronts, even on third downs meaning rookie phenom Leslie O'Neal would play over a guard and Smith and right outside linebacker Fred Robinson would provide the outside rush.

Other times Smith might played LDE in the "Bear" or even the nickel regardless Smith got to play fast and loose and do what he did in college-—get after the passer and if a run play "showed" he'd stuff it or chase it down from the backside.

In 1986, in addition to his 11 sacks, (second in NFL among linebackers behnd Lawrence Taylor) also he caught runners behind the line of scrimmage 15 times—The most in the NFL.

That "run/pass stuff" is not official just like pre-1982 sacks are not official, but since the early 1990s Stats, LLC., has tracked tackles of running backs for losses. We at Pro Football Journal  (mostly Nick Webster) have taken that category back to the 1980s and in some cases before. So, we know that Smith led the NFL and with his 11 sacks, it makes 22 so-called "tackles for loss"  as the NFL now calls them. Why not 26 you ask? Because if a fumble is forced then that player does not get credit for the tackle for loss, only on sacks when the quarterback does not fumble. (Don't ask us, it's not a really reliable stat).

In 1987 (after a holdout and then signing a new contract) it was interesting to watch the Chargers defense because Smith dropped more into coverage than in 1986 and in this case, the stats showed it—his sack dropped from 11.0 to 3.0 but he went from no interceptions to five, the most by any NFL linebacker that year and also led the Chargers squad in picks.

Essentially Billy Ray went from being a  Lawrence Taylor/Andre Tippett-type linebacker in 1986 to a Wilbur Marshall/Seth Joyner/William Thomas-type linebacker in 1987. It was odd to see back-to-back seasons with such extremes in responsibilities by the same player in the same defense with the same defensive coordinator. They did play more 4-3 in 1987 than in 1986 and that accounts for some of that difference.

Smith had a calf injury in 1988 early and then at midseason, he had a hairline fracture of a fibula and missed the rest of the season. He'd been moved to the weak side and with the Chargers still mixing in a lot fo 4-3 looks with the 3-4 he often was the "Will" 'backer as seen here— 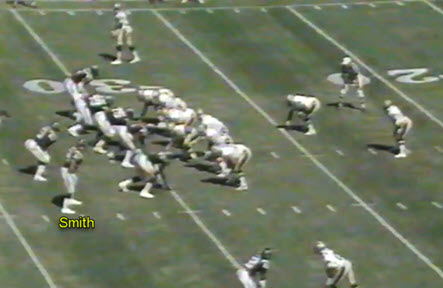 This is just another example of the various ways Smith was deployed in his career—Sam, Will, stand-up defensive end, nickel end, inside linebacker he was a Jack of all linebacker trades.

He came back in 1989 was returned to the left side where he was usually on the tight end side and was a Second-team ALl-Pro by NEA as a reward for his fine season. 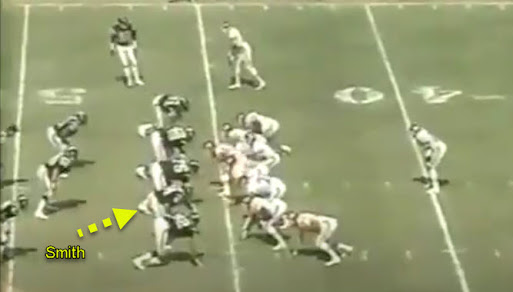 However, in the 1990s injuries caught up with him and his career was over in short order—playing just one game in 1992 and starting just 3 games the year before and missing a handful of games in 1990 with a serious abdominal strain.

In 1991, though, Smith had one final excellent game versus the Saints, earning him the AFC Defensive Player of the Week award for the second time in his career (he'd won that in week one of 1986) with a pick and a fumble recovery. But he was mostly a backup to Henry Rolling, the new strong-side linebacker.

In August of 1992, Smith was again battling muscle pulls (as he had in 1988, 1990, and 1991) but when he was healthy he played well in preseason and impressed new head coach Bobby Ross and defensive coordinator (who had coaches Smith's father in Baltimore) who said they planned to keep Billy Ray on the roster as a backup to Henry Rolling and the new superstar Will—Junior Seau.

However, his body couldn't answer the bell. In February 1993, Smith hung 'em up.

In today's NFL Smith would be quite a player because of his variety of skills. He could play base 3-4 or 4-3 defenses, either inside or outside (strong or weak), and could also put his hand in the dirt and rush the edge.

Since he played all those his stats don't have terrific totals in any particular category, had he been a rusher his whole career he could have been an excellent one, had he played coverage his pick total would be high. i.e. he should he could have great totals in either when called upon.

Certainly, he's not a Hall of Famer, that should be reserved by players who have amassed decent totals of All-pros and Pro Bowls, have left an impressive statistical trail, looks great on film, and has some impressive intangibles. Smith has the latter two but the stats and honors lack.

Nonetheless, the NFL is full of great players who are not quite HOFer, but should be remembered fondly anyway and we do remember his game fondly.

He was a helluva football player.