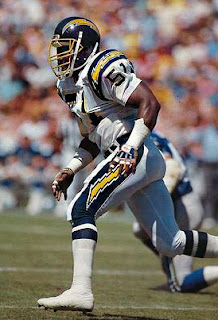 Woodie Lowe was a three-time First-team All-American (once a consensus selection) and yet because of his small size (6-0, 217 pounds), he fell to the San Diego Chargers in the 5th round (131st overall) of the 1976 NFL Draft. His college coach, the legendary Bear Bryant said that getting Lowe so late in the draft was like "getting a $10 gold piece for 10 cents".
Bryant was right.
All Lowe did that first year was win a starting spot as a rookie and total 84 tackles, sack the quarterback three times, recover a pair of fumbles, block a kick. But that wasn't enough to make the NFL All-Rookie teams, losing out to Greg Buttle of the Jets,  the Bengals Reggie Williams, and  Larry Gordon of the Dolphins on the First-teams of the major outlets that picked teams that year.
That was something Lowe would have to get used to—getting snubbed for honors, something that sure didn't happen in college. 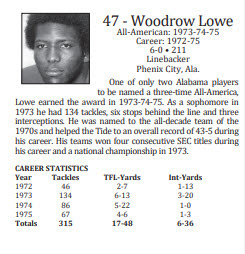 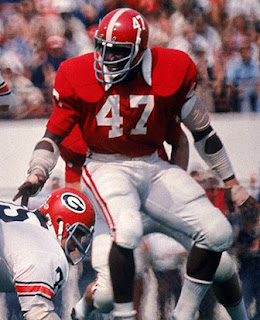 Coryell was right. Lowe and Preston picked for five passes each and Lowe returned two for touchdowns and the charger defense was top-5 in yards allowed and second in fewest points allowed. 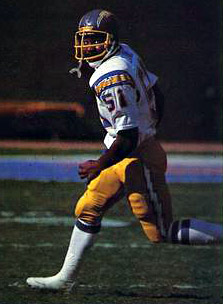 The next season, 1980, the defense was sixth in yards allowed but the points allowed ballooned to 18th. Lowe had a Pro Bowl-level season, and for the first time received some post-season honors, making UPI's Second-team All-AFC squad and was an alternate to the Pro Bowl, but one of the top three vote-getters missed the game so Lowe didn't get to go. (Preston, too, had a good season, but not as good as he did in 1979 or as good as Lowe did in 1980).
Lowe totaled 133 tackles, defensed 14 passes, including three interceptions (one was a pick-6), forced a pair of fumbles and blocked a pair of kicks. He was as good at covering backs out of the backfield or his zone responsibilities as any linebacker in the game.
It has been well-documented that the Chargers defenses were not good in the early-to-mid 1980s, usually finishing in the mid-to-high 20s in terms of rankings in both points and yards.
In 1983 the Chargers switched to a 3-4 scheme and it really was not Lowe's scheme. While he was able to use his ability to run and cover in a 4-3, in the 3-4 and the need to blitz did put him at a disadvantage. He was game, he gave it his all, but like several of the linebacker in his era, he just wasn't going to be a star in a 30 defense. 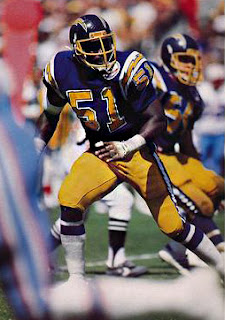 Lowe had a knee injury in 1987 and was put on injured reserve and after the season his contract expired and was not signed by anyone after that. It was the first serious injury Lowe suffered in his career. He's missed one game in 1984 with a hip injury, but he could have gone, he told the Los Angeles Times, but the coaches and docs made him sit. All the rest of things were the nagging type of injuries he could play through. But this knee, which he said, make a 'clicking' sound and he had surgery that Fall but it was just the end of the line for Lowe's professional career.
His career stats show 26 sacks and 21 picks, kind of reminiscent of the kind of linebackers that were around in the 1960s and 1970s like Jack Ham, Isiah Robertson, Dave Robinson, Chuck Howley, and others with 20 or more sacks and 20 or more interceptions. And he was three short of 20 forced fumbles as well. He filled up the columns in the tackle chart, that's for sure.
Of course, one sack and forced fumble he'd like to have back was the final play of the September 10, 1978, game versus the Raiders—know as the "Holy Roller" play. On that play, Lowe rushed Stabler and knowing he could do nothing with the ball the Snake intentionally threw the ball forward when Pete Banaszak then threw it forward, and then Dave Casper fell on it.
Lowe, of course, thought it was an incomplete pass, as did most fair-minded observers, but in real-time, and with no instant play and a poor view of the play referee  Jerry Markbreit didn't see it that way, so it was a Raider win.

Be that as it may, we'd say he had four (1979-82) seasons at near Pro Bowl quality and a few more surrounding those four that were very solid. He was a leader, became a skilled cover linebacker pretty quickly after doing very little of it at Alabama. He could block you a punt, and from 1983-85, though still small, maybe 235 pounds, got a handful few to a handful of sacks in the new 3-4 scheme.
For his size, he played well. And like some of the other linebackers we've profiled lately—Thomas Henderson, Michael Jackson, Tom Jackson, and Rod Shoate, Woodie Lowe would be a great fit in today's NFL as one of the hybrid linebackers/money backers that are part safety, part linebacker.
That is kind of what he was then. At 6-0, 227 pounds or so with legit 4.6 (or better) speed, good tackling ability, excellent cover skills, he would likely be more of a star now than he was then. At least we think so.
Here ar his career stats— 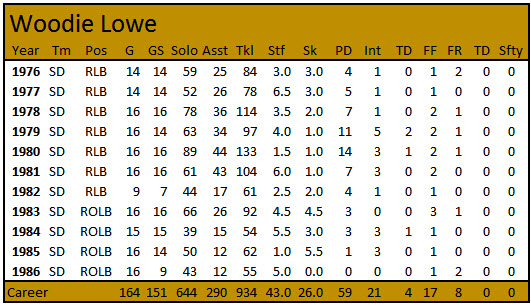