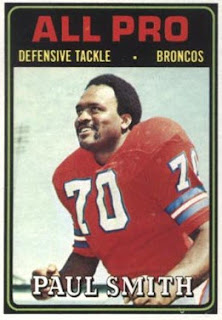 Paul Smith played in the shadow of Rich Jackson, a dominating player who was felled by a knee injury and then by a flamboyant defensive lineman named Lyle Alzado so people sometimes forget how good a football player Smith was.
Smith was selected in the 1968 NFL/AFL Draft by the Denver Broncos and actually began his career as a linebacker in Broncos camp his rookie season. He had the quickness to be able to do it but he didn't have the knack for going backward in coverage, so they moved him back to the defensive line.
There, he backed up a fine group of players for a couple of seasons getting a few starts and some snaps. In 1970 he earned a starting position at defensive tackle but on those lines no one played just one position. The late 1960s-early 1970s Broncos were very innovative for that era and their lineman moved around far more than anyone we've seen through film study.
You can see Smith at both defensive tackle spots but almost as often you could see him at either end. The same went for the others—Jackson, Alzado, Peter Duranko, Dave Costa, and others. 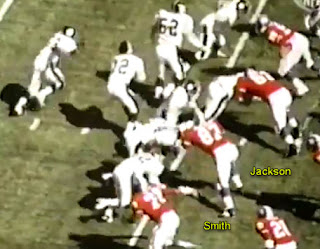 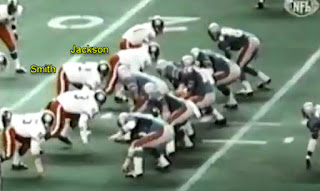 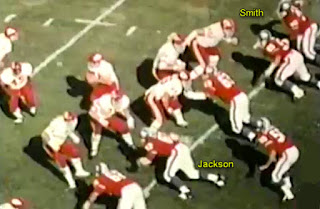 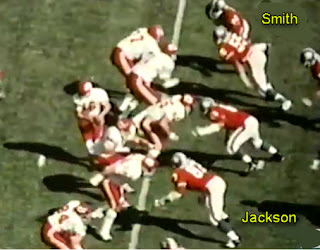 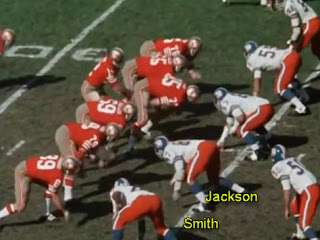 Teams now do it, but in our view, the Broncos of that era did it more with more players than anyone before or since. We've even seen Jackson line up as a linebacker at times.
In 1970 the Broncos allowed 3.3 yards a rush and sacks the quarterback 50 times as they were in the conversation with the Cowboys, Rams, and Vikings for the best defensive line in football. Smith had a total of 20 sacks plus stuffs and was credited with 30 "harassments"  by the Broncos coaching staff, which was their turn for a hurry.
In 1971 Rich Jackson suffered a knee injury at midseason and the group lost some of it's effectiveness late in the year but Smith inproved with 22 sacks plus stuffs and had 39 hurries.
One note on stuffs:  we track them the best we can, but sometimes the gamebooks don't list all of them so perhaps the way to read them is "at least", for example in 1970 Smith had "at least 10 stuffs".  These days the gamebooks are more complete so players get credit for all their stuffs.
In 1972 Smith began to get noticed and went to his first Pro Bowl and totaled 10½ sacks with 41 hurries, a career-high. Then in 1973 he went to his second and was Second-team All-Pro and Pro Football Weekly named him their Defensive Lineman of the Year. His coach, John Ralson, called him "the finest defensive tackle in the league". His stacks plus stuff totals was 21 and he had 40 hurries or "harassments" if you prefer that verbiage.
As we mentioned with Otis Sistrunk maybe Smith was not as good as Joe Greene or Alan Page i nterms of skills in an evaluation but it's likely that he had a better year in 1973, like Sistrunk may have and even Mike Reid may have.
Joel Buchsbaum wrote when Smith passed that Smith was the AFC's version of Alan Page and had it not been for his knee (sic) injury he would have been one of the greats.
Yes, the knee injury. Actually, it was not a knee injury, it was a ruptured Achilles tendon that ended his 1974 season.
After four seasons (1970-73) of averaging 75 tackles, 8 stuffs, and 11 sacks, and 38 hurries, Smith played just two games in 1974 and his injury seemed to limit him the rest of his career. It was an era that knee surgeries didn't always work—just ask Dick Butkus and presumably, it was the same with surgery on heels. Many times a player came back unable to regain their previous abilities. These days players recover almost routinely, then, even the best surgeons couldn't correct the damage. It's just the way it was when a player had leg injuries, you just never knew if you could come back one hundred percent.
Smith came back in 1975 but he just was not the same, his quickness was still good, but not great and his numbers fell as well, to about half of what they had been. He finished with 45 tackles 4½sacks and 23 hurries. Good, but not stellar as he had been.
In 1976 the Broncos switch to the 3-4 defense full time and he was the right end, though he missed a lot of time that year, too.
The next two seasons he was Barney Chavous's rotation backup. The Broncos would play their starters for two series and then have the backups play one series—the Bronocs called it the "alternate line". Chavous and Alzado would start, and play the two series and then Smith would play LDE for Chavous for a series and at the same time, Brison Manor would spell Alzado for a series.
After 1977 Smith was waived early in the 1978 season but quickly re-signed and his role continued, though he got much less playing time with John Grant and others getting some of his snaps.
Smith enjoyed the winning in 1977 and 1978, almost shocked that they got to the Super Bowl in 1977. Perhaps a realist or perhaps shell-shocked by the years of mediocrity for the Broncos in his previous time there. He also particularly enjoyed the 7-0 win over the Cardinals in the 1977 opener.
Conrad Dobler had been the cover of Sports Illustrated and had mouthed off about defensive lineman and how tough he was and other such topics. And though they didn't line up over each other, Smith, spelling left end Chavous, would meet Dobler on slants and on pass rushes. Smith had told the papers that he was giving Dolber "I am giving him his first warning" and Dobler mocked it. So, Smith got the last laugh on the shutout.
After the 1978 season, Smith was a free agent and Washington signed him to backup Diron Talbert and Dave Butz so it was truly "Mr. Smith Goes to Washington". In 1980 Smith actually started in place of Talbert down the stretch on running downs but was replaced on passing downs by left end Karl Lorch with Dallas Hickman coming in to play in Lorch's left end position. Still, Smith got seven starts in his final season.
So, a guy who went from, 75 tackles, 8 stuffs, 11 sacks, and 38 hurries in his peak to 31 tackles, 1 stuff, and 1.5 sacks in his final six. He was just never the same player prior to his injury and in this case, the numbers do tell the stroy. 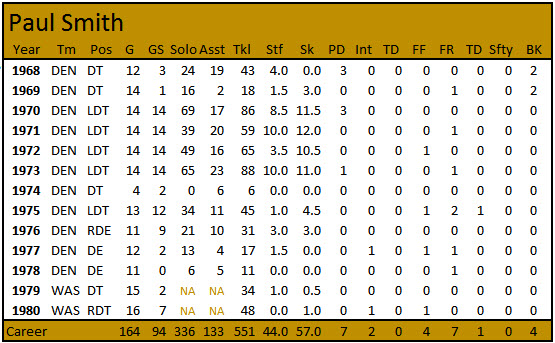 Paul Smith was inducted into the Denver Broncos Ring of Fame in 1986 and at New Mexico, Smith was a three-year starter (1965-67) and two-time All-WAC selection.
Smith died of pancreatic cancer in 2000
What could have been? Likely a rare inside rusher who totaled over 100 career sacks. He was a versatile player who moved around, could play end and do it well and we even saw him over the center at times.
He was special but overlooked in an era of great d-tackles like Greene, Page, even Lilly, Olsen, Reid, Jerry Sherk, Wally Chambers, Sistrunk, and others.
But we remember Mr. Smith. He was a good one.
Posted by John Turney at 1:38 PM