LOOKING BACK
By Chris Willis, NFL Films
"The details of forward passing should be practiced until they become a habit. The habit can be only acquired by endless practice. After days and weeks of practice the arm and wrist work properly and the follow through is at the finish of every pass." - Benny Friedman, 1931 The Passing Game.
Today, PFJ looks back at one of the earliest book written about pro football. A few years ago John Maxymuk, a fellow football historian and author, led me to a unique football book. He came across a copy of a book located in the University of Michigan Library titled The Passing Game written by Benny Friedman in 1931.

The former Michigan All-American quarterback in 1931 had just “retired” from the NFL and was helping out as a backfield coach at Yale. During the early part of that year he found time to write a short publication on the passing game that would be published that fall by Steinfeld, Inc. in New York.

Soon, Friedman got the itch to play football again in 1931 and re-joined the New York Giants. That fall Friedman didn’t have his best year, playing in nine games and throwing only 3 touchdown passes, as the Giants went 7-6-1.

As for the book, it’s a very hard title to find, which probably means it had a very limited press run back in 1931. The book is only 50 pages in length with no dust jacket. It has 7 chapters along with 12 photos (with  Benny doing the demonstration of grip and passing) and four diagrammed plays. The individual chapters are titled:

Chapter 4- Not Too High, Not Too Low; Not Too Fast, Not Too Slow

Chapter 6- The Choice, or Optional

Chapter 7- Backing Up The Passes 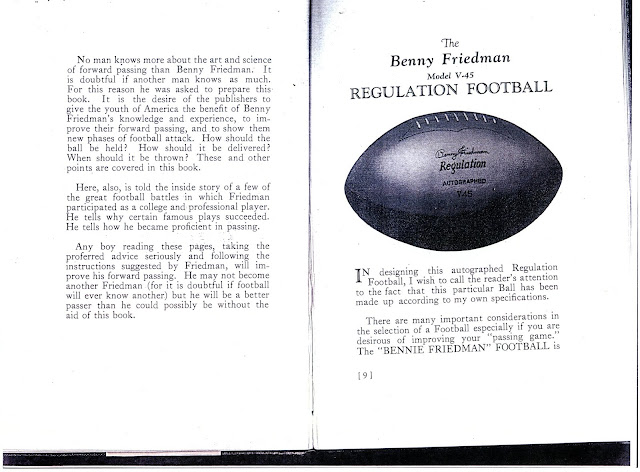 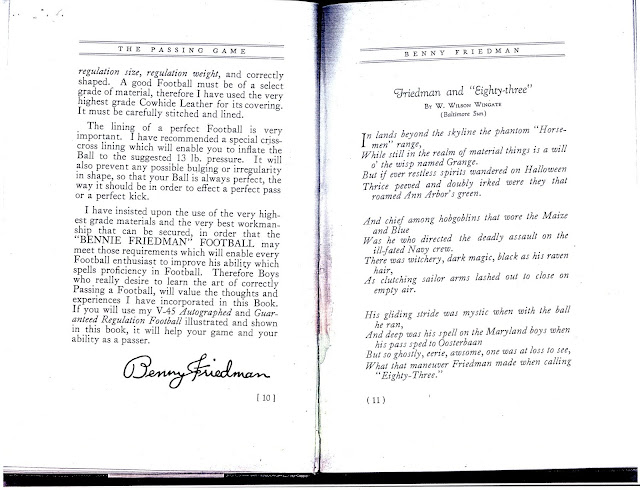 The book was reviwed by several newspapers including the Boston Globe, Pittsburgh Press and Wisconsin Jewish Chronicle- mostly favorable.

The Boston Globe (9-1-1931) wrote: “Football fans will like Benny’s book. It is pretty technical in spots, which should please coaches and youngsters who wonder how Friedman got that way. Ben wasn’t born with a forward pas sin his mouth and had to work hard and systematically to perfect himself. How he did it make interesting reading.”

Joe Williams of the Pittsburgh Press (8-29-1931) wrote: “Mr. Friedman’s book as you will note is largely technical and educational, which is what he intended it to be. I think the football fan and the football player will find much in it that is of interest.”

Not too many books are written this early about NFL history or football techniques. Since this book was published in 1931 and Benny Friedman was playing with the New York Giants it’s one of the earliest books with an NFL connection.

P.S.- Considered the earliest book on NFL history is Dr. Harry March volume, "Pro Football- It's 'Ups and Downs': A Lighted-hearted History of the Post Graduate Game." Published in 1934 by J. B. Lyon (N.Y.)