When Joe Horrigan of the Pro Football Hall of Fame recommended me to George Clooney's production company never dreamed that I would make not one, but two, period piece football movies as the football coordinator. 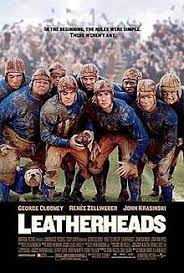 While this story is about my time in Fort Worth Texas, there will be some compare and contrast to Leatherheads. Beginning with casting, worked with a real pro in Ms. Tona Dalhquist on Leatherheads, and her two very capable assistants; Kellie & Greg Smith. The producers and more specifically Clooney knew that without a background in movies,  I would need help, and boy oh boy, did George Aguilar come through.

As the stunt coordinator, he taught and guided me, and learned my lessons well. We shot so many quality football scenes in Leatherheads that did not make the movie, and the main reason why those scenes worked so well was the dedication of the actors, and "my" football extras. So many fine athletes that were mature, and easy to work with made my life on set so much easier.

Pictured below is the team photo of the Chicago Buffaloes right before filming the championship game.

Though could make statements about so many of these fine men----standing next to me in the photo is former Pittsburgh Steeler linebacker Will Bouton. When told to "scrape the c-gap" and tackle Dodge Connelly, Will would do his assignment to perfection. How can you fail when you have that kind of background, skill, and knowledge?

Clooney assigned Aguilar and me to choose six men to be on his team to fill the roster, and some of them are still friends to this day! Frank Kucinic, Donny Stamper, Bobby Jordan, and Zack Kay responded in whatever role Clooney asked of them. Sharing this brings about the two basic questions that needed to be answered to make 12 Mighty Orphans—would the young actors respond to my teaching, and be believable as Mighty Mites? and after so many outstanding football extras in Leatherheads, would I be fortunate enough to find young men willing to dedicate themselves to be the opponents of the Orphans? August of 2019 arrive in Fort Worth and begin this saga. 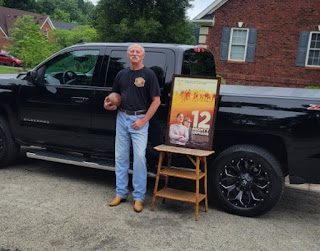 Working with a quality group of folks with one HUGE exception in Texas would help on a daily basis. Being involved with so many people and learning who they are as people, and their dedication to their craft was a joy, and still remain in contact with some of them to this day. After reading a script that was just awesome,  just knew that this movie could be an all-time classic, but first things first------the logistics of training camp.

Very fortunate to meet the head coach at All Saints Episcopal School; Mr. Aaron Beck, and were able to use his facilities. Coach Beck is pictured below as one of the referees in the movie, and in the photo are two of his former players Denver Bush and Mason Suitt. Not only does Coach Beck run a top notch program, he became a valued friend. 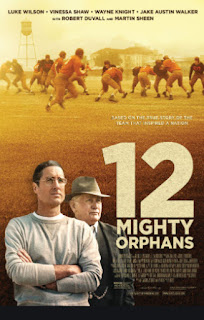 Was informed that there would be a young man assisting me on a daily basis as my assistant/associate football coordinator, and Mr. Joshua Moody came through with flying colors.  Our age difference might have worked in our favor, as he was just damn outstanding in relating to the young actors, and football extras. Joshua had played ball, was a quality athlete, open-minded to learning 1938 football, and filled roles during filming that are just not my strength. He has a very bright future in the movie industry.

Speaking of bright futures? The young actors during camp HAD to learn football stances, strategy, and how to begin to function as a team, so they could in fact BE the Mighty Mites. Not sure where their careers will take them, yet you just never know, maybe this film will be a springboard for a long successful career? Even Robert Duvall (Boo Radley), and Martin Sheen had to start somewhere? Camp over, and though the young actors demonstrated that they could look like a football team, they were leaving me to shoot a movie, and would be quite a while until we shot football, would they remember their lessons? 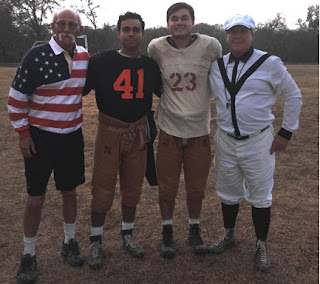 During camp, the Orphans/Mighty Mites learned the strategy that separated Coach Rusty Russell from other coaches of that era. Was told and read that Rusty Russell was the "godfather" of the spread formation, but as a man who relishes defining terms—spread formation can mean many, MANY alignments. Is it doubles, or trips, and is there motion?

This was my opportunity to separate myself from other so-called movie football coordinators who misalign their players due to the fact they don't know the strategy of the era they are filming or don't care. Producer Houston Hill was not only willing to help me, but he also introduced me to Russ Morton. Mr. Morton is Rusty Russell's grandson, and he had vintage quality film of Rusty Russell's offense from his days at SMU.

Those three hours at Russ Morton's home remain treasured moments in my life. Not only easy to talk to, he understood the game and is a terrific Rusty Russell storyteller. Mission accomplished, and the plays are drawn up. Those of you who read my stories here at the Journal know how much learning strategies of the different eras mean to me. Rusty Russell used huge offensive line splits(that is where football begins), aligned his receivers and backs in a way to be able to run both inside and outside, and "flood" the field in a way that always gave his quarterbacks open receivers.

Though the Masonic Orphanage had many fine players, this movie has two men that went on to outstanding NFL careers. Hard-hitting Hardy Brown, and Tex Coulter. Every young Mighty Mite was important to Rusty, yet he knew that he had to out coach his contemporaries to win. Would have loved to listen to Dutch Meyer of TCU fame sit down and discuss the passing game with Rusty Russell in the mid '30s—for a moment think of Slingin' Sammy Baugh, and his varied use of wing formations, and then picture C.D. Sealy under center using the Russell version of the t-formation. Having a daughter drawing up plays with crayons inspired Rusty, and wreaked havoc on opponents. Ok, the actors have learned techniques and plays, and away they go to film the movie scenes sans football, and now comes my greatest challenge.

Was promised 61 candidates to be the football extras(the orphanage opponents), but only 46 show up in October for the try-out. They were told beforehand to show up in cleats, shorts, in a white t-shirt, with their name printed by a big sharpie on the front. How in the hell can I use you, if I don't know your damn name. Some of the 46 were flat-out pathetic—they just flat lied, they never played, and stunk at doing the drills, and a few were not dressed properly. They were warned that the final drill.....called the humiliation drill would be eye-opening. The drill is a simple passing drill based upon timing and the ability to throw accurately.

Was concerned that none of the so-called "passers" would measure up, and my concerns, unfortunately, came true, thus the humiliation drill—where young men were embarrassed by a 68-year-old man who could throw the football more accurately than them. Thus in one of the key scenes in the movie, I am throwing the pigskin (as I also did in Leatherheads). Joshua and myself met for pizza, and he responded to my demand of a list of those he thought would help us as football extras.

Amazingly his list and mine were almost identical, and we both believed we had about 15 young men who could do what we needed, and we would keep an additional seven to fill out the rosters. There is no way this movie could be made with just 15 quality football extras. My wife used to live in the Dallas- Fort Worth area and one of her friends had a grandson who as a senior in high school, and was an outstanding football player, thus Wyatt Gay came through with his one scene sacking the quarterback. There are times you just have to adapt, adjust, and persevere.

Earlier mentioned Coach Beck, and one of his former players Mason Suitt who was a godsend in being able to do whatever was needed. Since I have not seen the movie yet, cannot tell you how strong the quality is of the football scenes, but working with a cinematographer like David McFarland was a joy. McFarland and his crew demonstrated they know how to shoot a scene.

Finally, the two men who might reap the benefits of this movie and are ultimately responsible for it. Lane Garrison shared with me how he viewed each scene should be shot, and we worked well together(plus he can actually run a decent slant pattern), and additionally, he is one of the actors in the movie and helped write the screenplay. Really, and truly believe that you do not tread into an area that is not your expertise, and there is no doubt I will never be a director, but Stephen Tyler Roberts is, and though just one man's opinion—he has a vision, and a future. Asking and answering questions of Ty was a goal that was achieved, and as such we now have a movie to go see.