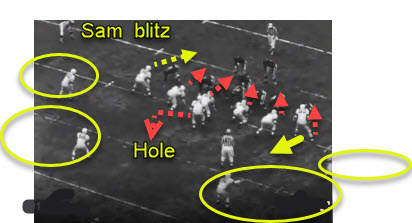 This is 1951 in a Browns-Bears game in Chicago. The Bears on offense in dark jerseys, the Browns on defense in white jerseys.
Of course, the Browns personnel is a bit different than the Bucs 4-3 defense—the Browns are in a 5-2 but the right defensive end is 6-5, 250/260-pound Len Ford in a 2-point stance. So, he looks like a linebacker.
We can see the secondary is lined up with the safeties 2-deep and they take 1/2 the field. The corners take the flat. The far side linebacker dogs.
Len Ford dogs then drops to the hook/curl zone in form of a zone blitz.
The Mike is #74 and he drops in between the safeties, what is now called the "hole".  He does carry the end for a while which tells us it is zone and not Cover-2 latch where he'd play the end all over the field. "Latch" is usually the SAM taking the tight end anyway, here it's the Mike covering him short to the hole then letting him go to the safeties.
Here is the play in slow motion action—
Sure looks like a Tampa-2 with a linebacker blitz. No?
Posted by John Turney at 1:50 AM