Mike Reid—Ten Sacks a Season and a Grammy 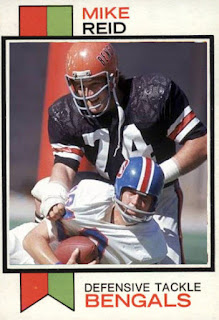 In Mike Reid's senior season, 1969, Penn State went 11-0 for the second-straight season, Reid was everybody's All-American, won the Outland Trophy and Maxwell Award, and finished fifth in the Heisman Trophy balloting. His junior season he'd been Second-team All-American. While at Penn State, he also wrestled and won the Eastern heavyweight wrestling title in 1967. Reid is also an inductee into the College Football Hall of Fame (1987).
He was the 7th overall pick in the 1970 NFL Draft by Paul Brown's Cincinnati Bengals and became a starter right away. However,  he missed the last five games with a left knee injury but ended the year with five sacks in just nine games and acquitted himself well. There were no major wire services or publications picking All-Rookie teams in 1970 however the Oakland Tribune chose one and Reid was named to it calling him, "(A)n immediate success with the Bengals".
He impressed with his quick get-off, still one of the best we've seen, right up there with Alan Page, Sam Adams, Michael Dean Perry, Tom Keating, and Aaron Donald. He just had a knack for seeing when the ball was snapped and moving with it which gave him a jump on guards. He was not the best with his hands, he seemed to rely on good footwork and instincts but he could sure find the quarterback.
In 1971 he registered 12.5 sacks and was voted All-AFC. The next season he was a consensus All-Pro and voted to the Pro Bowl with a 13-sack season. In 1973 he was not a consensus All-Pro was was First-team All-Pro on the player's team and again a Pro Bowler and again had 13 sacks.
Reid also was gaining a lot of respect among his peers. Writer Jim Klobuchar stated in a column, "Reid and Alan Page are probably the two best defensive tackles in the game". He then quoted a Viking offensive lineman who said, "Put it this way, 'I think Page is the best lineman in football. I would never want to go a full game against him. But this Reid may be quicker in his movements at the line. We saw one play against Dallas, I think, where he went past the guard and center practically without getting touched, on a straight charge. And you don't do that without a rocket booster.'".
In 1974 he was All-AFC but things were different. His production dropped and the pain went up. His knees and ankles and seemingly the rest of his body was aching.
He's originally hurt both his knees at Penn State—both had been operated on, the left knee twice and the right knee once. With the Bengals, he'd reinjured the left one again midway through his rookie season as we mentioned and it nagged him the rest of his career (as did the other one).
That, along with tears and pulls and cracked vertebrae which he played through made his life pretty miserable by 1974. He was also suffering from depression likely linked to the pain he was in. He was not enjoying his football life or his life in general. He said he had trouble just getting off the taping table to go to practice.
And this was coming from a guy who, in 1970, said there were few things in life he enjoyed more than playing football. He enjoyed the competition, the camaraderie, giving all-out effort to the point of exhaustion, and the soreness and pain that come with that kind of effort. He loved to play football his whole life. And now, he didn't anymore.
He was a guy who wanted to prove to the scouts wrong, all of whom, seemingly, told him he was too small to play defensive tackle in the NFL—that his 6-3¼, 250-pounds was an ¾-inch short and 15 pounds to light. "Can you tell me what difference three-fourths of an inch makes?" Reid asked, rhetorically. 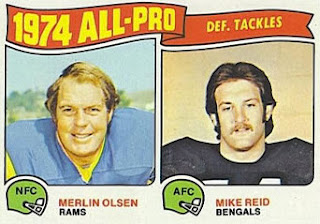 So, after that season, in early 1975 Reid went into Paul Brown's office and told him that he was retiring from football to pursue music, his true source of joy. Reid became very successful in his new career, winning a Grammy in 1984 and being inducted into the Nashville Songwriters Hall of Fame in 2005.
It is hard to know what may have happened with his career had he stayed with football and he had been healthier and happier toward the end. We know that his choice to leave was his to make and he was extremely successful in his new field and very happy in it.
We also know he was one of the best "quick-type" tackles there was and that averaging 10 sacks a year is rare, as of this post only Aaron Donald, Alan Page, and Reid having done it. With Page and Reid's sacks being unofficial. Reid was on pace for 100 had he played 10, 12 seasons. Maybe more.
He's have likely needed to work on his hand usage to be more of a complete player like Greene or Olsen or Lilly but that would have come.
Another thing we know is that Reid, at his peak was a helluva a tackle who was hard to block and who was as good at getting to the quarterback as any tackle, ever.
Posted by John Turney at 3:39 PM