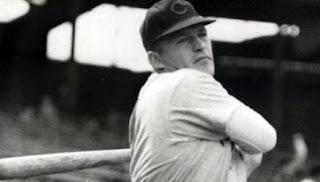 There have been a handful of men who played both baseball and football that come to mind, but doubt if many of you usually think of Steve Filipowicz.

He starred at Fordham University and was part of the Sugar Bowl victory over Missouri on January 1st, 1942 in a game that will never be equaled. Steve was taken by the New York Football Giants with the 6th overall pick in the '43 draft, but will not play for them until 1945. He began his major league career on September 3rd, 1944 at the age of 23, and he started with a bang as he hit a double and triple that day. The next day he goes 3 for 10 in a doubleheader with 4 RBIs.

He struggled the remainder of the month, but Steve was now a pro athlete.

The 1945 New York Baseball Giants had Steve Filipowicz as their starting left fielder, and he sure had his moments in the month of April. Probably the best game in his 57 game career came on Friday, April 27th when he went 4 for 5 with 3 rbi's in a 5-0 win.

Notably he and player-manager Mel Ott hit back to back home runs in the game. As the summer months passed the Giants began to fall back in the pennant race and finished fifth for the season. Now it is time for the New York Football Giants to defend their Eastern Conference championship.

The '44 Giants had one of the best defenses of the decade, but New York would not be contenders in '45. Bill Paschal had won back-to-back rushing titles, but was not with the team opening day, and wearing his #8 jersey is Steve Filipowicz.

"Flip" as he was called carried the ball 53 times for 142 yards during the first few weeks of the season; there was no doubt he was not Bill Paschal. When the former Georgia Tech runner returned to the line-up against the Rams he sparkled, and Flip was the left linebacker wearing jersey #34 in the Giants 5-3-3 defense. When the Rams sent a man in motion to his side of the field he went with him man to man and though he had quickness he lacked the necessary speed in his 5'8" 198 lb. body to run with the faster halfbacks in the league. Filipowicz was a hustling tackler who did miss once in a while, but overall in the games was able to study on film he acquitted himself well.

He would return to the New York Football Giants in '46 and this team won the games they needed . . . to win the eastern conference. He was again playing left linebacker, and for this season he wore #23. Steve demonstrated marked improvement as a pass defender, while still being a solid tackler. He played very little fullback and carried the ball just twice during the year, though he did catch a few passes. During the conference clinching victory over Washington on December 8th, he intercepted his fourth pass of the year.

The New York pass rush got to Baugh, yet Slingin' Sam tried to get the ball to his receiver in the right flat. Filipowicz moved forward grabbed the errant throw, and dashed for the corner of the end zone, and scored! New York had beaten and outplayed the Bears in the regular season, and this would be the third time these two times would meet for the title.

The strange "hanky panky" with the betting odds led to back-up fullback Merle Hapes declared ineligible for the game, and with Paschal out also—the question for all Giants fans, who would be lugging' the leather? Filchock was allowed to play and he played his heart out, yet the Bear secondary picked him off six times. Surprisingly the Giants outgained the Bears on the ground as Filipowicz carried the ball more in this game than he did all season.

His most significant offensive contribution was after the fake of a sweep left by Filchock to Flip, he continued up the left sideline and Frankie got the ball to him. Off to the races down the sideline, Filipowicz dashed hoping the get the Giants the lead in this hard-fought game.

Swift George McAfee hustled over and took him down after a gain of 36, but New York was not able to score, thus the Bears won the title. Steve would not play either major league baseball or pro football in 1947 as he took a position at Mount Saint Mary's College in Emmitsburg Maryland to coach.

The itch to return to pro sports led Steve back to major league baseball in 1948; this time with the Cincinnati Reds. He was called up in September and hit .346 for the year as the left fielder. During the doubleheader on September 21st he went 4 for 7—yes folks they use to play a lot of those back in the day, yet the way his major league career ended is eye-popping.

October 3rd he got the winning hit in the bottom of the ninth to provide Johnny Vander Meer with the run he needed and win his 17th of the season.

In closing let's review his short pro career; he hit back to back home runs with the all-time National League Homerun leader Mel Ott.

He returned an interception for a touchdown off of Sammy Baugh.

He got the winning hit for the only pitcher in major league history to throw back-to-back no hitters in the final game of his pro career. 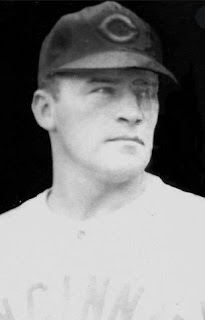 Today would have been Steve Filipowicz's 100th birthday!