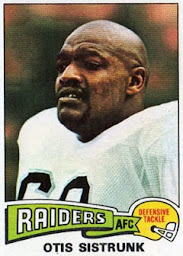 The 1973 All-Pro consensus defensive tackles were Joe Greene and Alan Page with Mike Reid computing one slot on the player's All-Pro team. So, that means that those were the D-tackles who had the best seasons, right?
Maybe. Maybe not.
Does being all-time great necessarily mean you had the best season?
Well, one person disagreed with one of the picks—the New York Post's Paul Zimmerman who picked Greene and . . . Otis Sistrunk.
What did he see?
Back then the Raiders press releases didn't include tackles, tackles for loss, or sacks. But in reviewing the gamebooks we found that in 1973 Otis Sistrunk had 13 sacks and 10 run stuffs that season. That is a lot. A whole lot.
Obviously, we are very aware that sacks or other defensive statistics tell only part of the story and that we don't think Sistrunk was a better player than either Greene or Page but if Greene had four sacks (and 6 stuffs) and Page five sacks (eight stuffs) and Sistrunk had 13 (and Mike Reid also had 13 plus 7 tackles for a loss) maybe Zimmerman was on to something. Maybe for that one year, Sistrunk had a better year that Greene and Page.
Sistrunk's 23.0 sacks plus stuffs is pretty impressive in any era, for instance, Aaron Donald has only exceeded that total twice in his career so far. Think about that.
The Beginning
Sistrunk grew up in Georgia and joined the United States Marines right out of William H. Spencer High School in Columbus, never attending college After leaving the Marine Corps he played semi-pro football for the West Allis Racers/Spartans of the Central States Football League (where he was an All-Star both seasons) in 1967 and 1968. From 1969-71 he played for the Norfolk Neptunes where he was an Atlantic Coast Football League All-Star in 1971.
There he was scouted by the Los Angeles Rams and gave him a tryout in their 1972 training camp. The Rams had some success with Coy Bacon, another player out of the semi-pro ranks. The Cowboys actually found him but traded him to the Rams after Bacon didn't take to the flex defense. After a few years of experience Bacon had become a Pro Bowl player for the Rams. They saw a lot of Bacon in Otis and gave him a shot.
Sistrunk, a distant cousin of then Washington defensive tackle Manny Sistrunk, made an impression right away in Rams camp when he arrived and when asked his name at check-in said, "Just tell them "The Trunk" has arrived.
Sistrunk made another impression early in camp by jarring loose one of rookie Lawrence McCutcheon's teeth on a hard tackle. The team dentist had to extract the tooth after practice.
In a joint workout with the Rams Sistrunk stood out and Ron Wolf and Al Davis took notice. The Rams had ten defensive linemen and planned to keep seven and the Raiders were looking to upgrade their defensive line from the previous year when they had injuries and aging and lack of talent with a few of their linemen.
After some talks with Rams brass, the Rams offered the Raiders their pick of four Rams linemen—the four that weren't locks for the roster. They were Sistrunk, 6th round pick Ed Herbert, 14th round pick Larry Brooks, and rookie free agent Jim Davidson.
The Raiders chose "The Trunk".
The Rams let Sistrunk go for a swap of their 4th rounder in exchange for the Raider third-rounder. In today's terms, using the Draft Value Chart, it amounted to a low third-rounder, high fourth-rounder.
While the trade values are more precise now but 1972 was not the dark ages, either. Back then, roughly two seconds equaled a first, two third-rounders were equal to a second, and so on. And a swap of picks also had similar values so our surmise is that while the Raiders didn't pay a lot for Sistrunk, they did give a fair amount.
Sistrunk won a starting spot with the Raiders and was All-Rookie in 1972. He took over for a fine player, Tom Keating who had been hurt a lot in recent years after being a star in the AFl in the late-1960s.
Otis went on to the fine 1973 season we covered earlier in this post.
In 1974 Sistrunk began to get some accolades, laking Second-team All-Pro and All-AFC. He might have been helped along in notoriety due to the Alex Karras comment that went along with a closeup on ABC's Monday Night Football showing Sistrunk's shaved head. Karras said, "That's Otis Sistrunk from the University of Mars".
To this day one cannot post of photo of Sistrunk on Twitter without that comment being posted in a reply. No matter how many times it's done, it does not seem to get old. Wear it out, people. Wear it out. 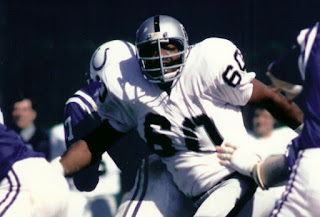 In 1975 Sistrunk was All-AFC once again with another season with over 22 (22.5) combined sacks/stuffs with a career-high 13.5 sacks and nine stuffs on run plays—Not bad for a guy with no college.
That season was similar to 1973 in that The Trunk could have been selected for higher honors based on production. Joe Greene had monster years in 1972 and 1974 winning the Defensive Player of the Year award both seasons. He was nicked in 1973 but in 1975 he played through a serious neck injury and it did cut down on his production. He was still Joe Greene but he didn't have the numbers some other d-tackles did.
We don't say that for a "hot take' it's just that in this era the numbers are known and then. they were not, at least for all players and sometimes a reputation could get a player an "All" when maybe he didn't have his best year. Maybe Mean Joe's skill set was still significantly better (it likely was) than Sistrunk and others. But the All-pro teams are purportedly fore that one year, not a player personnel evaluation. Of course, in the latter, Joe Greene wins, if healthy, every time. If the former, we simply suggest it was debatable, in hindsight—which is a credit to Sistrunk, that's all.
In 1976 the Raiders, due to injuries on the defensive front moved to a 3-4 defense, and Sistrunk switched to right defensive end from left defensive tackle and The Trunk performed admirably as the Raiders won it all in Super Bowl XI. 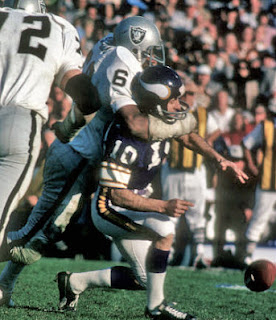 In 1977 Sistrunk again was the right end in base defense, but with the addition of Pat Toomay and a focus on a 40-nickel scheme and Toomay playing his familiar right end spot, Sistrunk, in nickel moved to left defensive end with John Matuszak the left base end sinking to left tackle.
The Trunk was showing his versatility. He continued to do so in 1978 when he moved to nose tackle in the 30 defense and played, usually, right tackle in nickel once again fulfilling a dual role and doing it well. 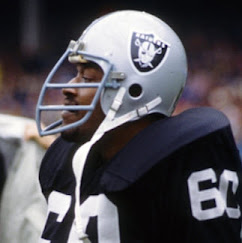 In 1979 he hurt his knee and missed the season. His contract was up after the season and he was not signed by the Raiders or anyone. Sistrunk had ended his seven-year NFL career and twelve-year pro career.

Sistrunk, at 6-6, 265, was a mobile tackle with good quickness and length, and natural strength. He was just one of those players who could just play football at any position along the line. Left tackle? No problem. Right defensive end in a 3-4? Sure. Left end in a four-man line? Okay, coach. Right tackle in nickel? Got it. Nose tackle? Piece of cake.
Many players' heads would spin with so many changes in so few years.
After Sistrunk's career, he was a military intramural sports and recreation coordinator, most of them at Joint Base Lewis-McChord in the state of Washington. He also acted in a couple of movies "Carwash" the most notable, playing "Otis" and did some professional wrestling as well.
Sistrunk did it with a bald head and a smile and for a guy who wasn't an edge rusher his 43½ sacks from 1973-76 is very, very impressive and to match that with at least 30 run stuffs is also stellar and that will, now that the stats are known through digging through gamebooks, will be his legacy, he was not just the guy with that bald head and no college degree. He was a very productive player in his prime.
Good job, Otis.
Posted by John Turney at 9:57 PM