We know a lot more about addiction now than we did in the 1980s. Back then we were all more judgmental to those who couldn't "kick the habit" whether it was alcohol or drugs. We thought those people—especially athletes, with all the money they made should be stronger, tougher. We liked to kick them around. One of those players was Mike Bell.
He was suspended from football in 1986 and was troubled with drug addiction before and after that.
The Bell came from Wichita, Kansas where he an All-State player (after recording eleven sacks from his defensive line position) at Bishop Carroll High School and was heavily recruited by Wichita State and several Big 8 schools but the Bell family wanted scholarships for Mikes twin brother Mark as well and this package deal didn't want the schools wanted—they wanted Mark to walk on.
So, it came down to local Wichita State and WAC school Colorado State, the Big 8 schools didn't want the double-deal. So, the brothers chose CSU in Fort Collins.
Bell was an All-WAC player in 1977 and 1978 and was voted the WAC lineman of the year in 1977 following his 103 tackles and 15 sacks, four forced fumbles, and two fumble recoveries. The Associated Press named him to their second-team All-America after that season. In 1978 he was a consensus All-American and the runner-up for the 1978 Outland Trophy. Prior to that two seasons, in 1976, Bell was a Football News Sophomore All-American, totaling 86 tackles and 10 sacks.
He finished his CSU career with 25 quarterback sacks and 62 tackles for loss (still the CSU record) with 23 in both 1977 and 1978 (also the CSU record to this day) He's a member of the CSU Hall of Fame and the CSU All-Century Team. 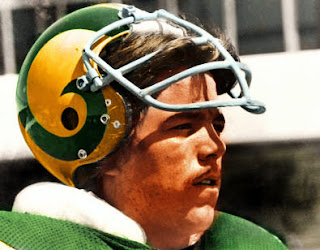 In addition, Bell has been inducted into the Kansas Sports Hall of Fame and the Wichita Sports Hall of Fame.
Bell hurt his knee at Colorado State and had surgery but it didn't deter the Chiefs from taking Bell with the second-overall pick of the 1979 NFL Draft by the Chiefs and formed a bookend to Art Still who'd been taken second-overall in 1978.
He spent his rookie year splitting time with Sylvester Hicks but Bell hurt his knee in the sixth game on a then-legal chop block and he missed five games. His coach, Marv Levy, lamented that the rule outlawing the chop block had not passed the previous June when it was considered by the NFL rules committee. In 1981 it was finally passed but two years too late for Bell and his aching left knee.
In 1980 he had a bicep injury and missed the final 14 games of the season. 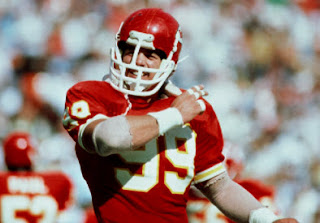 In 1981 he had a good season, one that Pro Football Focus would love because he had a slew of hurries but just five sacks. He also had 11 run stuffs and was gaining national notice bu scouts and the media as an up-and-coming star.
He hurt his again late in 1982 and it caused Bell to re-think his training habits. He had been an avid weight lifter and would "even get out and run" but too many pulls and tears made him think he needed more flexibility. So he began to train at the Olympic training facility in Colorado Springs in the 1983 off-season.
That strategy appeared to work—in 1983 he played all sixteen games for the second time in his career. In 1984 he hurt the knee again and was slowed by it but just missed one game and two starts. He was a Pro Bowl alternate both seasons.
In mid-season of '84, Bell was being compared to the best defensive ends in the NFL. Joel Buchsbaum said, "Bell is in the same mold as Gastineau but I don't think he's as good a pass rusher, but he plays the run better. It would be very hard for Gastineau to play a 3-4 defense. And end like Bell has to help keep blockers off the linebackers and Gastineau jus thas to worry about getting upfield".
The following season bell has 6 sacks in 11 games, perhaps onto his third consecutive double-digit sack season when the other demon in his life reared its ugly head—drugs.
A grand jury in Wichita, KS, indicted Mike and his brother Mark on several drug-related charges and Mike was arrested at the Chiefs facility in November 1985. Mike was suspended for the 1986 season as a result of the arrest. In June of 1986, they were found guilty on all charges, and Mike and his brother served four months in federal prison and were released in December of 1986. A few days after Mike applied to NFL commissioner Pete Rozelle for reinstatement to the league.
To be fair, though all of this, Bell maintained his innocence and purported turned down a plea deal to take the charges to a jury trial where he felt he'd be cleared.
In March of 1987 Bell was reinstated to the NFL by Rozelle, having served his time and met with the conditions of his league suspension.
He was about twenty pounds underweight at the time of his release. The Chiefs gave him a second chance, didn't release him, and had a fine 1987 season leading the Chiefs in sacks, though an ankle injury hampered him late. His new coach Frank Gansz said that Bell, "(W)as focused, you can see the intensity. He's a maturing, stabilizing influence on this defense. I am glad he's here".
To his credit, Bell told the media he tried to learn from his prison experience but also didn't dwell on it. He told the Kansas City Star, "I am ashamed of what happened and what it did to my family, my team, and my career. Why would I want to talk about it? It's a negative in my life".
In 1988 Bell was not playing all that well and at some point failed a league-administer drug test and was suspended for the final four games of the year. 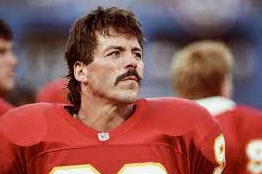 The Chiefs kept Bell around from 1989-91 as a backup, the final year he played just three games, being signed, released then signed late in the year. That tear he had inflammation in his shoulder and was on the non-football illness list for a few weeks before his release.
But really, those last four years were not the Bell of old. He just didn't have the explosion or the effectiveness he did earlier in his career. Why? Who knows. But the skill set had diminished.
He retired from the NFL in May 1992.
In his prime, teammate Bill Maas said that Bell was so quick off the ball he "blurred the film".  When you watched him he had a quick get-off and then a push with his arm that got inside the blockers that would snap the tackles back—just a nice combination of quickness and power.
He was a 6-4, 255-260 pound guy with good strength and who could run (4.7 forty) and was a good rusher, but he was not really playing his natural position in our view. He'd have been better as a 4-3 end.
Even teams that ran a 3-4 often went to four-man lines in passing situations, and the Chiefs did do that, but it was not as often as some other teams—perhaps because they never found interior rushers that were difference makers.
Ken Kremer was serviceable for a few years as a fourth rusher but really, even after Bill Maas arrived in 1984, it was often just three guys (Still, Bell, and Maas) and maybe a random linebacker rushing for most of Bell's (and Still's) career.
It would have been great to have seen Bell in a 4-3 defense his whole career, or relatively injury-free, or able to avoid the hard drugs. We think he'd remind recent NFL fans of a Grant Wistrom or Tamba Hali to name two right-side guys. Or perhaps Cameron Wake who played both sides or even Chris Long who was a left-side guy, but they all were healthier versions of Bell, reasonable facsimiles at least that generally got to play the edge and didn't have to play nose-up on a tackle on run downs or even on many passing downs like Bell did.
It was sad for Bell and his personal troubles and for fans who only got to see him at his best for short stints, not for long periods of time and that is just the price of addiction we suppose.
Regardless, while he was healthy, he was a fun player to watch, an arc rusher, with great hustle, the proverbial "high-motor" guy—a phrase you hear so often these days. Bell was that for certain.
And the final endorsement was from Anthony Munoz who said, "He was the toughest to figure out—I don't know what it was about him. . . his knowledge on how to use his body made it tough to pinpoint and say 'This is what you have to do to stop him'. He was one of the best I faced".
When Mr. Munoz speaks, people should take notice.
Career stats— 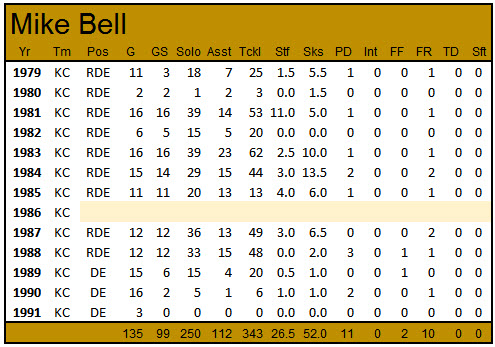 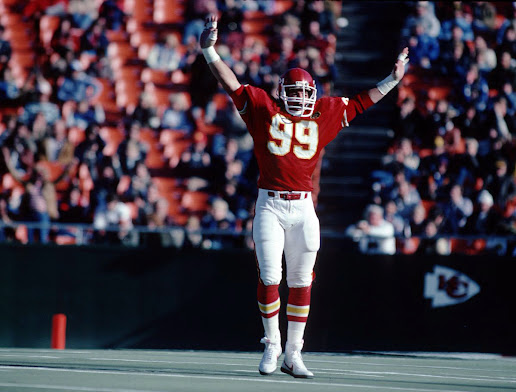