LOOKING BACK
By John Turney
As with designated pass rushers or nickel backs (not the band) it would be difficult to exactly pinpoint when a facet of the NFL was first introduced. We will explore nickel and dime backs in the near future but today we want to explore something fairly recent in NFL terms:  The 'Dollar' defense of the 1979 Rams, which was seven defensive backs behind four defensive linemen.

The following are pages from the Rams defensive manual.

As it notes the coverages for the Dollar and Dime are the same as the nickel. The positioning of the two DBs (LBers) would vary according to the offensive formation, the Rams defensive line front and the coverage and call (if it was a dog (blitz, the Rams terminology was a 'dog' was a LBer rush a 'blitz' was a defensive back rush). 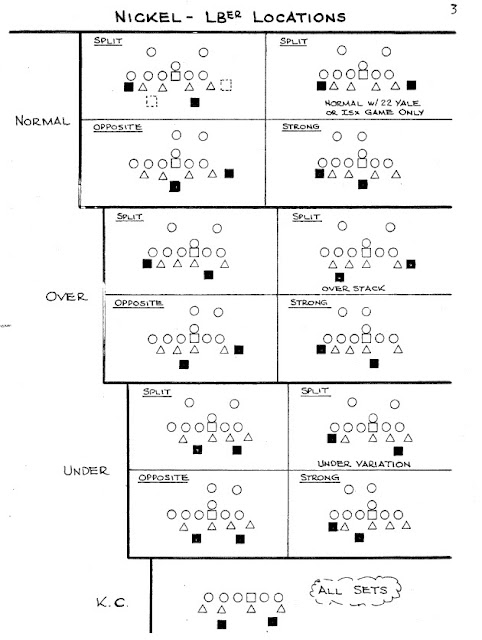 Another interesting note is that among the coverages is one that is called "Cover 22". While it may not be a familiar term, in today's NFL it would be called "Tampa-2". 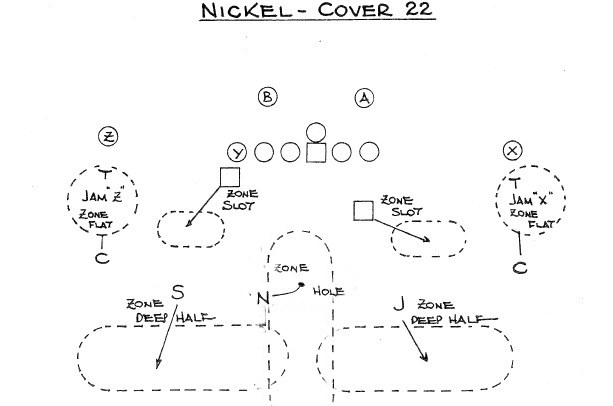 In entails the nickel back (in this case from 1978-81 it was Nolan Cromwell) to play the middle linebacker spot and his coverage was the "hole"—the middle zone that extends into the deep middle in between the deep safeties who had the deep halves. Cronwell would be responsible for a receiver running up the middle. Jack Reynolds, a great run defender, just would not have been able to play this coverage like some of those linebackers Tony Dungy had in Tampa so it was regulated to nickel with the Rams in the Reynolds era.

Said Cromwell recently, "Ray Malavasi's defense was ahead if it's time, it had an answer for everything. NFL Defenses are often recycled but yes, the Cover-22 is the same as the Tampa-2 in terms of coverage assignments."

Here is a screenshot of the 1979 Rams-Cowboys playoff game and you can see the deployment of the secondary versus the Dallas spread.

After the December 31, 1979, divisional playoff game versus the Los Angeles Rams, Dallas coach Tom Landry said, "LA has played seven defensive backs against us before. They just have some talented backs there and you have to find the hole. They mixed things up on us and tried to keep us off balance. And they were hitting well on defense."

What he was speaking about was the Rams nickel defense that employed two defensive backs as linebackers and the Rams playbook called it "dollar" personnel, as opposed to the standard "nickel" for five defensive backs and "dime" for six DBs.

Rams coach Ray Malavasi, referring to the dollar defense said, "We tried to match speed with speed. Linebackers don't have the speed of receivers. It was Bud Carson who came up with the idea "He had planned to use it here in October but we had too many defensive guys hurt. It was very effective for us today.".

On likely passing downs, Dallas liked to use a "spread" or "shotgun" offense. They had two excellent outside receivers, Tony Hill and Drew Pearson, and a very good third wide receiver, Butch Johnson, and also two very good situational running backs, Preston Pearson and Ron Springs. Although Tony Dorsett was a good receiver, Pearson would replace him on third downs because was just tougher to cover for most linebackers. Springs was also a good receiver but also a good blocker versus rushing linebackers.

So, the Rams pulled out a wrinkle in their playbook, which had been there for years, and used the seven defensive backs to counter the Dallas spread attack. 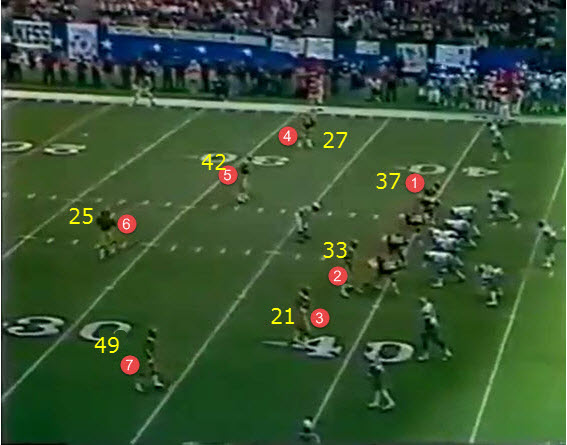 When the passing personnel of the Cowboys came into the game, the Rams pulled all three linebackers and brought in Dwayne O'Steen, Ivory Sully, and Eddie Brown. (technically O'Steen started the game at left corner because Pat Thomas was nursing an injury, but early in the game Rod Perry hurt his knee and Thomas came into the game as the left corner and O'Steen moved to right. Later, Perry was ruled by the trainers able to play and he came back into the game and Thomas and Perry, the normal starters, were playing in the base).O'Steen and Sully would play the linebacker positions, Eddie Brown would play strong safety, Dave Elmendorf would play free safety and Nolan Cromwell would play the slot corner. The Rams were free to use any of their coverages and felt that the front four and O'Steen and Sully would be able to contain the running game that, in these situations, was sans Tony Dorsett.

Linebacker Jim Youngblood added, "We had a new nickel defense. We put in seven defensive backs. Yeah, it was very vulnerable to the draw, but we only used it only on third and long situations."

The base defense, even with Jack Youngblood playing on a fractured fibula, was able to bottle up Dorsett and the Cowboys running game just enough to put the Cowboys in third and long quite a bit. Roger Staubach was 13 completions in 28 attempts for 150 yards and one touchdown and one interception (by Eddie Brown) and was sacked one time (by Jack Youngblood in the 4th quarter forcing a punt).

That sack led to the Rams getting the ball and allowed the Rams to be in a position to take the lead on a 50-yard touchdown strike from Vince Ferragamo to Billy Waddy putting the Rams ahead 21-19. Dallas then was stopped on their final drive and the Rams won the game by that score.

The Rams used similar defenses after 1979, but usually with six defensive backs and one linebacker. In 1980 and 1981 they had a player named Joe harris who was a smaller, quick linebacker who could cover and blitz and he'd match up with Jeff Delaney or Ivory Sully as the two linebackers. In 1982 George Andrews and Sully were usually the two linebackers in the nickel.  In 1983 the defense changed and it was Fritz Shurmur's 3-4 as a base and Shurmur kept the tradition alive and there were various and sundry packages in his playbook for "sub" defenses ("sub" is a catch-all term for all schemes other than base).

In fact, in some ways, the Rams recent defense with Alec Ogletree and Mark Barron as the linebackers in front of five defensive backs is similar to what was done in the late-1970s and early-1980s. Before those two the Rams used players like Adam Archuleta, Craig Dahl, Corey Chavous, Mike Scurlock, Michael Stewart, and others to fill the role of a linebacker in the nickel defenses. 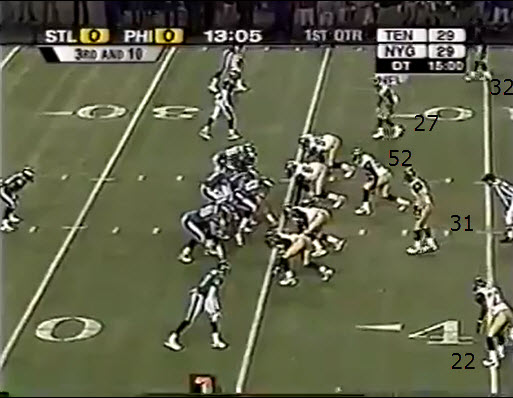 \
The Rams were not the only team to use seven backs, among others the Bills used it quite a bit in 1981. They had a safety named Rod Kush who could rush and cover and he'd play one linebacker, sometimes with Isiah Robertson as the other linebacker, but also sometimes Kush and Bill Simpson were the linebackers, Rufus Bess was the slot corner. Mario Clark and Charles Romes would play the corners and Jeff Nixon would come into the game and play Simpson's free safety spot and Steve Freeman would stay at strong safety. Kush intercepted a pass, recovered three fumbles and had 5½ sacks in his role as a linebacker, a role he reprised with the Oilers in 1985 when he had 5 sacks and a nickel linebacker.


Most teams, though, would not use seven backs like the Rams and Bills did. They would use the traditional 2 LBers and 5 DBs most often, but there were plenty who used one linebacker and one defensive back as a linebacker in front of five defensive backs.

One such team was the Bears where Jeff Fisher and starting free safety Len Walterscheid as linebackers quite often, especially in 1982. 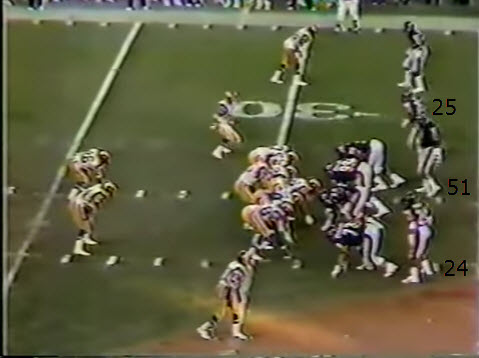 Another interesting one was the Cowboys. They had used six defensive backs in 1979, with Mike Hegman and DB Aaron Mitchell as linebackers and Dennis Thurman was the nickel back. In 1980 they had a fine young backer named Anthony Dickerson who was the linebacker in nickel and over the next several years he had different partners at linebacker, Sometimes it was Benny Barnes, then Charlie Waters or Dexter Clinkscale. But in 1983 he got perhaps his best partner in the role: Bill Bates.
Bates was listed as a safety but his role was likely 95% linebacker. He and Dickerson would be behind the defensive line and Ron Fellows and Everson Walls would play outside corner, Dennis Thurman would play the slot and Michael Downs and Dexter Clinkscale would man the deep areas. In 1983 Fellows would come in the game with Bates and defensive lineman Don Smerek (who replaced John Dutton) and Thurman would move from corner to slot.

In 1984 Fellows was the starter at right cornerback in the base and Thurman would come off the bench. Bates would blitz (10 sacks from 1983-85 as a non-starter) or cover (six picks over the same period) and was a solid tackler if a team tried to run on the nickel defense.

There are tons of stories related to this topic and we will post some of them going forward. We think it is key since these kinds of schemes are commonplace now but in the late-1970s and early 1980s, it was new, interesting, and considered ground-breaking. Though it may have been tinkered with earlier than that but we think that when it was used in earnest was the same time the passing game was opened up because of the mid-to-late 1970s rule changed and the era of substitution bloomed and remains in full force to this day.
Posted by John Turney at 5:28 PM