LOOKING BACK
The Works of Robert Riger
(Part 3 of 3)
By Chris Willis, NFL Films

The last post of this week the works of Robert Riger focuses on perhaps his most famous photo. The “” shot has probably been seen by fans, and non-football fans, than any other football image ever taken. One of the biggest asked when glancing at the photo- who’s the player caked in mud?
It’s none other than Packers Hall of Fame tackle Forrest Gregg.

Gregg played 13 seasons with the Packers mostly under Vince Lombardi. The great coach always called Gregg “the finest player I ever coached.” He played in 188 consecutive games, made 9 Pro Bowls, won 6 NFL Championships (including three Super Bowls) and was inducted into the Pro Football Hall of Fame in 1977.

He was also in the right place, at the right time for Robert Riger.
On December 10, 1960 Robert Riger was in San Francisco covering the Packers game against the 49ers. Stepping onto the sidelines at Kezar shoes quickly became filthy in a quagmire of mud, as the city of San Francisco saw a weekend of rain in early December. Shooting photos in these conditions would be a challenge. But the artist from New York was up to it.

The 1960 Packers weren’t quite the team of the 1960’s yet. At this point Vince Lombardi had just turned the team from being franchise in the NFL to a tie for first place in the Western Division. A win against the 49ers and Rams the following week would give them the title.

But the game against the 49ers would turn out to be a muddy affair. Both teams slopping through the deep mud, going nowhere. In the second quarter the Packers Paul Hornung kicks a 38-yard field goal to give Green Bay a 3-0 halftime lead.
In the second half both teams did more of the same- going nowhere in the mud. It wasn’t until the 4 that the Packers finally put away the pesky 49ers. Hornung did all the damage by scoring on a 28-yard touchdown run- diving head first into the end zone and sliding for five yards- and kicking a 23-yard field goal to give the Packers a 13-0 victory.

Late in the game Riger settled on the Packers sidelines. As players were getting muddier and muddier Riger started focusing on the players on the bench, rather than the action on the field. The 49ers were trying to mount a drive behind Y.A. Tittle, who had just replaced an ineffective John Brodie. Tittle then throws an interception to Jesse Whittenton and at this moment Forrest Gregg leaps from the bench and roars with approval.
In the split second that Gregg stands up and yells, Robert Riger snaps a photo. Gregg then disappears to finish the game. Thinking nothing it Riger walked off the muddy field as the final seconds ticked off. After the game Riger sat with Vince Lombardi on the team bus. The two discussed football strategy. The 49ers tried to run some shotgun formations and Lombardi was not impressed.

"Their offense backfired!” roared Lombardi with a laugh. Suddenly Vince became serious. "You know I think all that new with the spread is a lot of junk. You play this game with your power. You do what you do best- and you do it again and again.” Typical Lombardi, even in just his second season as Packers head coach.

and Lombardi chatted for nearly forty minutes on the bus talking about the performances of Paul Hornung and Jim Taylor. “(Jim) Taylor has great balance and he can cut quickly and our best play is a simple fullback slant. He can run it over tackle and if that closes he can come over the center or he can swing wide outside.” The coach even drew a few diagrams on Riger’s airline ticket. It was an intimate moment between coach and artist.

What Riger did not know was that a photo that would make him famous was sitting in his film case next to him. The photo became an instant classic. It won the grand prize award in Look Magazine’s Sports Photo out over 700 entries from the nation’s top photographers. The following year it appeared on the cover of the 1961 Green Bay Packers Yearbook.
As for the Packers they would go on to beat the Rams the following week and clinch the Western Division title. But two weeks after the “” photo was taken they would eventually lose in the NFL Championship Game to the Philadelphia Eagles.

Over the next fifty years the photo continued to pop up in publications and now on the internet. Even Forrest Gregg used Riger’s image on the cover of his autobiography in 2009. Titled “Winning in the Trenches: A Lifetime of Football,” Gregg and author Andrew O’Toole choose the defining image of Gregg for the book. 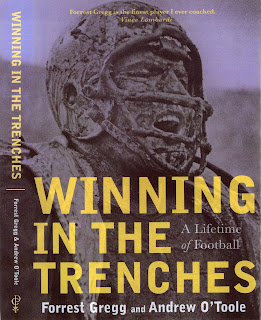 Robert Riger took thousands and thousands of football photos in his career. But has defined what his work is truly about like the “” photo.