Bradford is Fair Game For Criticism. But the Media Should Get the Facts Right. 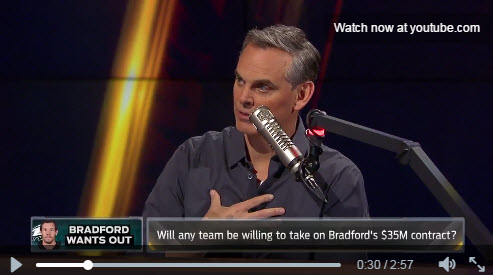 Colin Cowherd took a strong position today concerning Sam Bradford's desire to be traded and to sit out the Eagles voluntary off-season program. And Bradford is fair game, it does appear unseemly to sign a two-year deal months ago and because the Eagles are going to likely take Carson Wentz this upcoming Thursday in the NFL Draft to then become upset about it.

Because of that, Bradford is taking a lot of heat from the sports media. 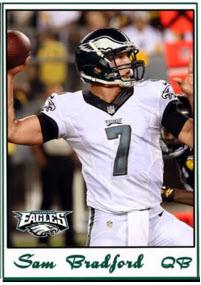 However, it is too bad that there are inaccuracies in Cowherd's analysis. The most glaring is saying "The Denver Broncos called his agent. And Sam and his agent said 'Nooooo, top dollar for Sambo'. And they said yeah, right". Cowherd then offered some thesis that money has diluted and skewed Bradford's perception.

And that is an interesting theory. Except no proof or sourcing was offered by Cowherd. While it is likely that Denver did call Bradford's agent, but there are zero media reports about any such conversation, if one did occur. If Cowherd has that information due to his own investigation, he should enlighten his listeners.

As far as we know Bradford is under contract and the terms are set. Perhaps Cowherd is speculating that if Bradford would take less money then Denver would deal for him, but if that is the case, Cowherd didn't it nor did he offer any data points to back it up.

What has been reported is that Denver contacted Philadelphia and Denver balked because the Eagles asking price was too high. That is a theme that is found in (at the moment) 316 stories on the Web. We do not know what the Eagles are asking, but since they want to keep him and since they paid a net #1 for him last year (#2 and Nick Foles, who carried a second-round price according to , and change) that they would be asking for something quite high. However, as of April 26, 2016, there is no information that Condon helped nix a deal because of some "top dollar for Sambo" comment.

Is it possible that Cowherd made an error in his show preparation? Or is it possible he's twisting the knife with glee? ? Really? Floppy sleeves? Maybe he confused the Eagles "asking price" with Bradford's desire for "top dollar"? We don't know.

So, whatever abuse Bradford takes in the media is completely fair game, but using a conversation that Condon and the Broncos had in which you have zero information to further a thesis of "money skews perception" is off-the-mark.

Cowherd also said Bradford a well-paid bust. Okay, that's his viewand he's welcome to it. However, he also said Bradford  "turnover plagued". We are not sure what Cowherd's definition of that is, but perhaps he is unaware that Bradford's interception percentage is tied for sixth-lowest in NFL history. Many charges can be leveled at Bradford's statistics, but throwing interceptions at an alarming rate isn't one of them.

Additionally, Cowherd mentioned fumbles. Fumbles are an odd stat for quarterbacks because for years, until recently, the quarterback was credited with a fumble on a bad snap, for example. And there are other oddities, too, but they pretty esoteric and perhaps we will explain them at some point. But fumbles for quarterbacks can he hard to read, and really, recovered fumbles should count as part of the mix. But Cowherd just listed Bradford gross total for fumbles along with his interceptions to make the case that part of the reason Bradford is a bust and he is "plagued" with turnovers.

Well, let's do this: Let's count all quarterback fumbles and then credit them for fumbles (as a happens quite a bit). Then do that all the quarterbacks who have completed 1000 passes. Add that net fumble number to the interceptions each quarterback has thrown.

Then, let's look at that number as a percentage passing attempts plus sacks plus rushing attempts which give you a "touches" number for quarterbacks.

Where would Bradford rank All-time? .

That chart does not say Bradford an All-time great, nor that he's worth what he's been paid under the pre-2011 CBA that gave lots of money to unproven talents. However, to say someone who is excellent at avoiding interceptions is "turnover plagued" is errant. And when you count fumbles into the mix, Bradford is not turnover prone.

So, when going after someone like a Bradford, with the kind of vitriol Cowherd did, it serves everyone, including the issue of fairness, to be as accurate as possible. No?
Posted by John Turney at 3:47 PM