The Unusual Case of Ottis Anderson

ANALYSIS
By John Turney
At mid-season 1985, a football fan might look at purring along to perhaps one of the greats. True, he was not a breakaway threat, didn't have the speed of of the other great big backs than in the game at the time, but he was productive.

Anderson, through seven games in 1985 had 105 carries for 486 yards, a 4.6 average and four touchdowns. He was on his way to another 1,000-yard season, which would be his fifth, only missing the mark in the strike-season of 1982. Then, versus Dallas, he lost 10 yards on 11 carries. The next week he seriously injured his foot against Tampa Bay and had one carry for three yards. And just like that, his season was over. What no one could know is, essentially, his career as a St. Louis Cardinal was over. He's been an All-Pro, a Pro Bowler and NFL Rookie of the Year, all that could have been asked of him when taken in the First round of the 1979 NFL Draft.

With the 1985 injury coming mid-season and the 1982 strike season in which Anderson played 8 games, that gave him six full seasons with the Big Red. In those seasons, he averaged over 1,300 yards rushing and 48 catches.

Anderson did come back from the injury in 1986, but a month into that season he was traded by the Cardinals to the New York Giants for a second-round pick and a seventh-round pick. And with the trade to the Giants came the . And sitting.

He sat until 1988 when he won the role of the Giants short-yardage specialist. That season he carried the ball just 65 times, but scored 8 touchdowns, and was also very effective in getting first downs in short yardage situations.

In 1989 another foot injury entered into Anderson's fate. Giants starting running back Joe Morris broke his foot and Anderson claimed the starting job. Anderson joked with John Madden that he wasn't a Plan B free agent, that he was a "Plan C" free agent. It seemed you couldn't watch a Giants game in 1989-90 with Madden announcing without hearing that comment repeated. It simply meant that Anderson was joking that his own value was less than even those free agents that were left unprotected by their teams and thus, allowed to sign with other teams. 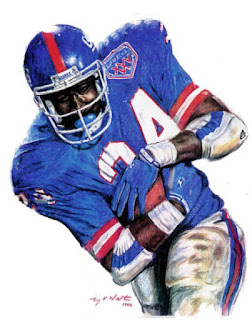 Anderson was a part of the Giants ball-control offense, carrying the ball over 20 times a game, averaging 3.1 yards, but finding the end zone 14 times. He was named the NFL's Comeback Player of the Year Award as well. The following year, it was much of the same, though he split time with Rodney Hampton, the Giants #1 draft pick that season. Anderson was the go-to guy in the playoffs, ending with a 21-carry, 102-yard (4.9 average), 1-TD performance in the Super Bowl and a Super Bowl MVP Trophy.
Anderson hung on as a backup for two more seasons, ending his career with 14 seasons and 10,273 yards rushing. Anderson has not received much acclaim as a Hall of Fame nominee. However, he does have some interesting supporters. 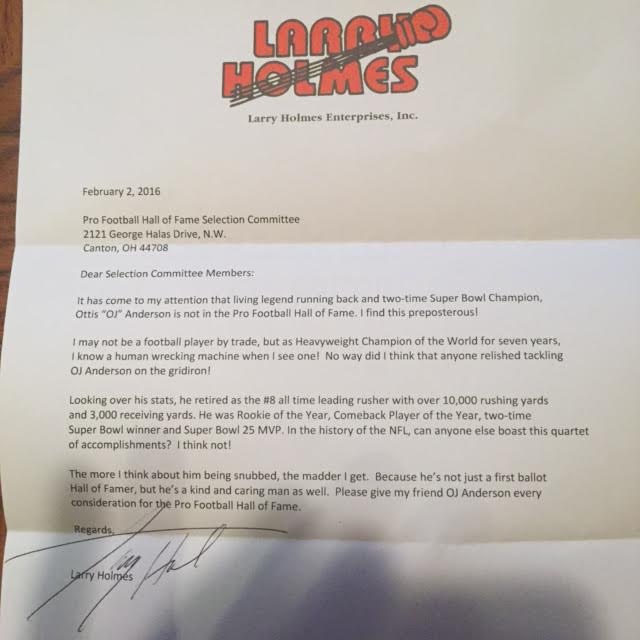 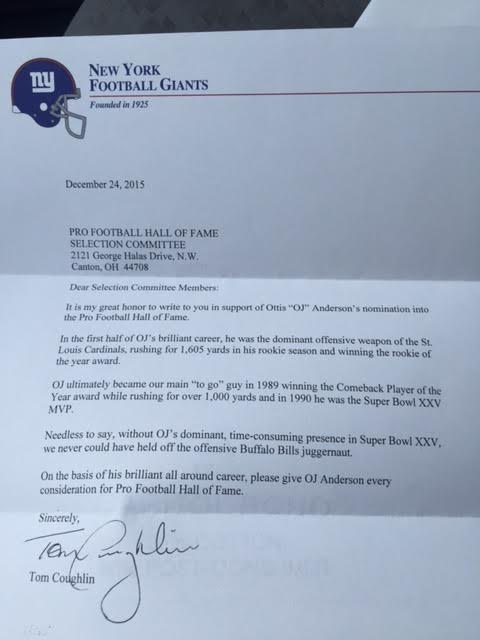 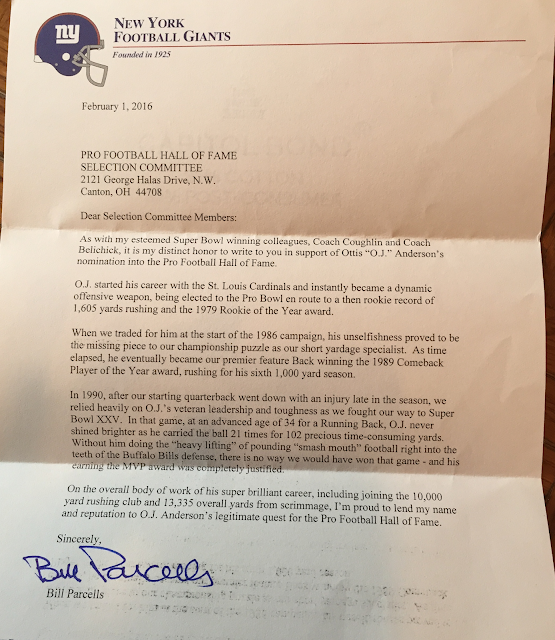 It is my understanding that letters of recommendation do little, unless it comes from an opponent or opposing coach. However, it is a compliment to Anderson that his coaches give him such high praise.

We thought Anderson's career is unusual in that it has the "donut hole" framed by an amazing fast start from 1979-85 and a legitimate comeback that helped a team win a Super Bowl and deserved to be heard.
Posted by John Turney at 5:36 PM