LOOKING BACK
By TJ Troup
This Sunday, the 24th of April, will be Jim Hardy's 93rd birthday. Hardy played high school football in Los Angeles, and led USC to a Rose Bowl victory. When the Cleveland Rams moved west for the 1946 season and he joined the Rams he was still going to be playing quarterback in Los Angeles.

Adam Walsh and the his defending champions struggled during the 1946 season. Bob Waterfield was entrenched as quarterback; and Hardy had completed only 2 of his first 13 pass attempts through the first three games. Hardy played well in the 35-14 win over Detroit and threw the first touchdown pass of his career. He also completed the longest Ram pass of the year (60 yards to Red Hickey). Since this was still a two platoon era, Jim played some defensive back (intercepted against the Lions in November), did some , and played quarterback in a few more games.

Bob Snyder took the reigns in 1947 and again Hardy played sparingly the first seven weeks as he attempted only 9 passes. Jim had a fine game in the loss to the Bears, and followed up that performance with his best game of the year against Detroit on November 23rd.

Hardy completed 4 of 6 for 65 yards and 2 touchdowns. Owner Dan Reeves made another coaching change 1948 as he hired Clark Shaughnessy. The 1948 season was a turning point in Hardy's career as he received more playing time in Clark's creative and innovative offense. The Rams after four games had a record of 1-2-1 and if they were going to be contenders could ill afford a loss to the Lions in Detroit. Waterfield was injured and the Rams trailed 21-0 at the half. Detailed film study shows Jim finding the open receiver as he strategically "read" the Lion coverages. Los Angeles rallies to take the lead, only to have Detroit come back and tie the game.

Hardy then directs the Rams 69 yards down the field for the winning score. On the drive he completed 5 of 6 for 63 yards as the winning touchdown comes with just 55 seconds left. The next week by far his greatest performance as a Ram. Jim Hardy is the first quarterback in league history to throw for over 400 yards against a defending league champion. The Chicago Cardinals built a 27-3 lead, yet Hardy just keeps firing passes. Los Angeles closes the gap to 27-22 but could not overcome the future conference champions.

The rest of the season Hardy and Waterfield share the position as Los Angeles finishes strong. Los Angeles again revamped their roster, and Hardy left the Rams, and joined the Cardinals. The Cardinals have been in back to back championship games, but the coach who took them there (Jimmy Conzelman) had retired. Chicago attempts to use co-coaches in Phil Handler & Buddy Parker, but halfway through the campaign Parker becomes the head coach.

Though the Cardinals played some fine football in '49 they are not as strong a team as the two previous years. Hardy shares the position with Paul Christman. The Cardinals have a record of 2-3 when they head out on the road to take on the Lions and New York Bulldogs. Chicago scores 107 points the back to back victories, and Jim contributes with 290 yards passing and 5 touchdown tosses. The Rams are trying to hold off the fast closing Bears in the western conference race and in one of the most exciting games of the year the Cardinals tie Los Angeles 28 all. Hardy throws 2 touchdown passes against his former team, and plays brilliantly in 41-21 win over Green Bay as he again throws 2 touchdown passes out of just 11 attempts.

When he falters in the Coliseum against the Rams in December he is benched for the season finale against the Bears. He is an interested bystander as he watches Johnny Lujack shred the Cardinal secondary for 468 yards. The NFL undergoes some changes as a new decade begins with the absorption of three teams from the AAFC, and the free substitution rule adopted for another seasonthis time for good). Hardy will be playing for another new coach as Earl "Curly" Lambeau takes over in Chicago. 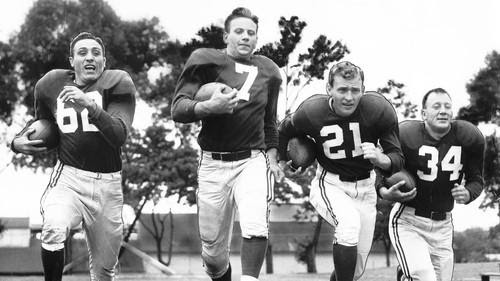 Opening day Hardy sets the dubious record of throwing 8 interceptions in the 45-7 loss to the defending champion Eagles. Jim rebounds and torches the Colts on a Monday night at Comiskey Park as he completes 13 passes for 281 yards, and 6 touchdowns. Film study shows his synergy with Bob Shaw at an elite level as time and again they connect for scores. Hardy struggles the next two weeks in back to back losses, and during the middle of the year he shares the position with Frank Tripucka. Hardy is back in form late in the year as he directs a Cardinal victory over the rival Bears 20-10 (19 completions for 255 yards).

Johnny Lujack in the main quarterback with the Bears at this time, and since both are still alive, and both earn Pro Bowl berths . . You have the compelling story of these men competing for bragging rights in Chicago. Lambeau does not finish the '51 season with the Cardinals, and as such Hardy has never had the same coach complete two consecutive seasons. is injured early in the year, and Hardy has one last opportunity to take control of the quarterback job in Chicago. Future Hall of Famer Charlie Trippi played quarterback every week, yet some games Jim is the man at the controls for most of the game.

The highlight of the 1951 season for Hardy is his 80 yard touchdown pass in the Coliseum against the Rams in a losing cause. Buddy Parker is building a championship contender in Detroit and  needs a back-up quarterback for Bobby Layne in 1952. Since he has knowledge of Hardy's skills; Jim joins a champion in his final year in the NFL.

There are statistics that truly tell a story and are useful in evaluating a player. The passer rating system is a tool for evaluating a quarterback's efficiency. Hardy's passer rating for his seven-year career is 53.1, but we need to take a much closer look at what he did when he threw the ball. Jim Hardy's passer rating in the games his team won in his career was a sterling 78.7, but in the games he lost he was a dismal 35.9. When Jim Hardy was good, he was good, but . . he was bad, he was awfully bad.
Posted by TJ Troup at 8:15 PM