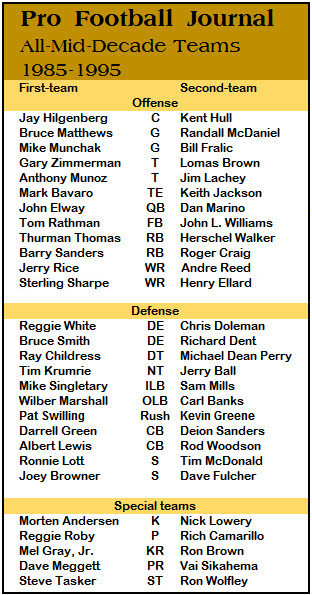 Now, THIS is the 10-year span that Jerry Rice, Reggie White, Bruce Smith, Gary Zimmerman and others just dominated. Lots of star power here.
Anthony Munoz was All-Pro almost every year from 1985-90 but tailed off, but his "Alls" were just too many to ignore. The same is true of Randall McDaniel who is a clear 1990s choice, but he just didn't do enough to vault over Matthews and Munchak for the 1985-95 team.

It is good to see Lomas Brown, a 7-time Pro Bowler get some notice. Ray Donaldson, Dermotti Dawson (who made the 1990s team) honors and Nate Newton fit very well, too and get honorable mentions. As do Chris Hinton and Mike Kenn of Atlanta who was very, very highly rated by
Proscout, Inc.from 1989-93.

The center position was neck-and-neck. It could go either way in our view. The guards on the First-team were simple but they had a gap between those on the Second-team. Tom Newberry is an honorable mention at guard, just losing out to Fralic. He started out hot, but tailed off.

The quarterback position was difficult, leaving Jim Kelly off, but looking at stats, MVPs, etc.,  was just short of Elway and Marino. Joe Montana would also be very viable here, as well. Elway gets it because he did more with less. Marino didn't have a great supporting cast either but the Broncos didn't really belong in the three Super Bowls they lost in this time frame. Elway got them there.

Picking a quarterback for the All-Pro voters is an art, we imagine. Voters look at the statisticssure, but also the team success. They also may scour for quotes to buttress who they will pick, seeking for "intangibles". Most seasons, especially when all the All-Pro teams are seen as a group, the AP, PFWA, NEA, SN, and so on, they get it right, likely taking in all available data and putting a name on the ballot.

Well, an All-Decade team has to be done in a similar way and statistics are not the only thing, but they are something. All-Pro selections within that decade something, but not everything. Team success cannot be the only thing or a Dan Marino or Jim Kelly will always get "dinged". So, it is a mix of things, we , more art than science.

So, if, for leave Montana out due to his injuries in 1991 and 1992 remember it's more of an art for us as well. No one is really right or wrong and because of that if other organizations would follow suit then a consensus could be built. We add this paragraph only because there was some deep talent at quarterback from the mid-1980s to the mid-1990s. Warren Moon, Randall Cunningham, Boomer Esiason and others were at their peak and some worthy players will simply lose out to a numbers game.
The running backs were interesting in that they were , Thomas in 1988 and Sanders in 1989. But for this decade Sanders was the top rusher. It's one of those where he just All-Pro too much to just keep him in the 1990s. Emmitt Smith was close, too. Even Eric Dickerson, 1980s All-Decade performer, was still very high in yards rushing.
You see Herschel Walker, yes, you do. Walker was second only to Thurman Thomas in yards from scrimmage from 1985-95. Roger Craig had his best season (1988) and his 1,000/1,000 yard season (1985) in this span and he gets the  over Dickerson, Marcus Allen and Emmitt Smith.
Sterling Sharpe is one of those 'What could have " if not for injury. As it was, he was a terrific receiver and touchdown machine. Ellard began to come into his own in 1985 and was for a long time. Gary Clark and Irving Fryar are honorable mentions.
Another tight spot was and in addition to the two we chose, Steve Jordan, Rodney Holman, and especially Brent Jones and Jay Novacek were right there and any could have been picked but we went to Bavaro because his numbers were good, but he was a great blocker and had the highest yards per catch among all the tight ends in this period that had 200 or more catches and tied for the most touchdowns (with Keith Jackson).
The four defensive ends are chalk. Though we feel like we need to reserve a wild card position for Charles Haley. He split his time between  and defensive end. There is no room at  and others who played almost the entire decade at  leave him out there, too. Charles Mann, who had several "blue" seasons as per Proscout, Inc. the sole honorable mention at DE.


Ray Childress was a 3-4 DE for his first five years, but always played left defensive tackle in the nickel. Starting in 1990 he was a full-time LDT when the Oilers changed schemes to a 4-3. Michael Dean Perry likely has the most stuffs of any player in this 10-year span.  was a sideline-to-sideline nose tackle, and was effective, though you may have to slide his "decade" to 1984-93. Jerry Ball was All-Pro often enough and like Perry, had some big seasons in the "stuff department".
Steve McMichael is an honorable mention, he was more steady than his peak wasn't what the four in front of him were. Dan Saleaumua should get a plug, as well along with Henry "Hank" Thomas, who we think should have been at least Second-team on the 1990s team.

Keith Millard would have had one DT spot, but the knee injury in 1990 ended that prospect. From 1985-89 he was THE best defensive tackle, in our view. But, he is not the only tragedy among interior linemen. Jerome Brown was really getting it going before a car accident took his life. In 1989 he had a 65-tackle, 10.5 and 17.0 stuff season. THEN he was All-Pro the next two seasons before he was taken too early. So he, with Millard and Sharpe and others are in the "only if" category.

We so wanted to go with 2 and 3 the competition is hot and heavy. had his two DPOY seasons (1985 and 1988) here, so we couldn't leave him out. Sam Mills's mid-decade would be 1986-96 and he was the top ILBer for the whole span. But leaving out players like Chris Spielman, Karl Mecklenburg, Pepper Johnson, and John Offerdahl (talk about a forgotten warrior).
Mecklenburg, in fact, deserves a wild-card spot, like Charles Haley. Not many players can be an inside linebacker on run downs, then convert to defensive end in the nickel. Bryan Cox has done it, Brian Urlacher did it as a rookie, Charlie Clemens of the Saints did it in 2000. Mecklenburg did it from 1985-94. It's a tough skill set to have.
We chose one "complete" linebacker and one "". Wilber Marshall was so good in 1985, his first season as a starter and then got better. Carl Banks was a dominant SAM backer. As far as rush backers, Lawrence Taylor would still fit here, but even he'd tell you his football was played pre-1991. We went with Swilling by the narrow margin of his DPOY in 1991 over Kevin Greene, who had more sacks (story of Greene's career, huh?).

Green was in his prime in this period, as was Albert Lewis, just a fine, fine cover corner (Hall of Fame worthy) and as good a rusher on punt blocks as we've ever seen. Deion Sanders, who would be on everyone's 1990s Decade team, and Rod Woodson, too, will have to settle for Second-team selections in this Mid-Decade team.
Ronnie Lott was a simple choice and the other three were a bit ahead of the others in terms of All-Pro selections and statistics. Browner and McDonald and Fulcher would take turns as All-Pro strong safeties. During this era it seemed there were more strong safeties than free safeties, but Wes Hopkins's 1984-93 is an honorable mention s free safety. Dennis Smith is, too, as a strong safety.

We looked at the kicking percentages and distance and these were the top two kickers of this decade. The top net punters got the nod that also avoided big returns and had good inside-the-20 to touchback ratios. The return men who got noticed were the ones who took it to the house the most.
Reyna Thompson and Elbert Shelley were the honorable mentions behind the bomb-squad choices of Tasker and Wolfley.

Agree or disagree? Post in below and tell us where we got it wrong.