Panthers and Jaguars Uniform Near Misses - 1995


The Carolina Panthers and the Jacksonville Jaguars began play in 1995 in the National Football League. Both were adorned with, in our view, good looking, well-designed uniforms.

However, that wasn't the case  in the prototypes (again, our opinion).

The Jaguars uniforms were called for a penalty early on when the design for the Jaguars logo was too close to the logo of the Jaguar car company and had to change their logo:
And presumable they had to remove that similar logo from the jersey. Via Sports Logos.net these appear to be what was originally desired by the franchise in terms of uniforms. The away uniforms with the teal pants seem particularly annoying. 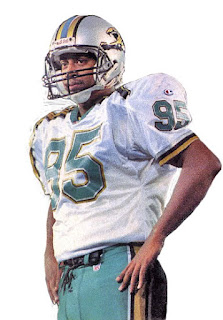 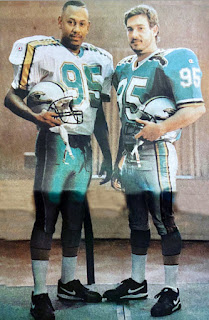 However, all is well that ends well. We think the uniforms that the Jaguars donned in 1995 were excellent. They went with white pants rather than teal on the road uniforms and white pants rather than silver for the dark/home set. And the black helmet with a central logo was also sharp. We cannot say the same about the recent changes in the Jaguars ensemble, to us, it is a hot mess. But, to each his own. 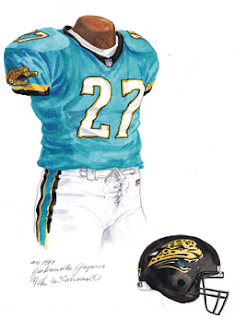 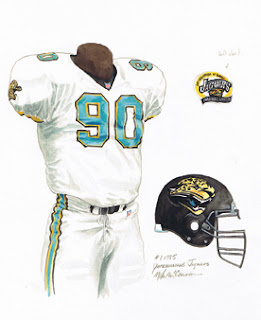 From the shot above with Jerry Richardson you can see that the jersey there is similar to what was ultimately chosen. The only difference is the shoulder stripe was changed from back to Carolina blue. It was a minor, but solid improvement.

However, this is what was first announced that the Panthers would wear: 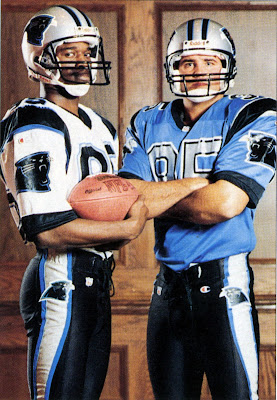 It was shown that they would wear black pants, both at home and on the road. And the home jersey would be Carolina blue. While not as odd as the original Jaguars uniforms, these just didn't sit well. Again, the powers that be seemed to come to their senses and in 1995 the Panthers had an excellent set of home and away uniforms. They did add the Carolina blue jersey as an alternate later, but never with the black pants. The black pants did show up a few years ago with a black on block design that looked pretty good in our view.

Here is an iteration that shows white jersey and white pants combination, but it is not as definitive as the photo above that was at the press conference in October, 1994. 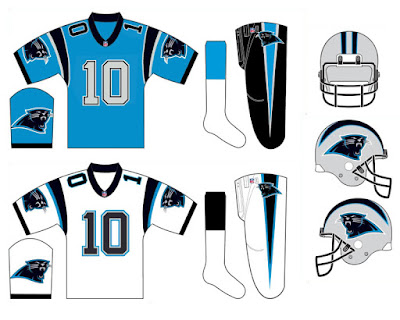 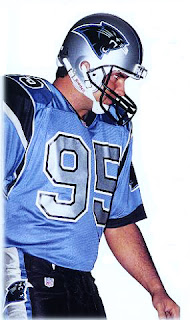 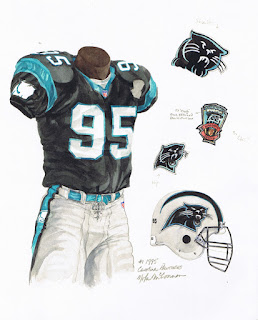 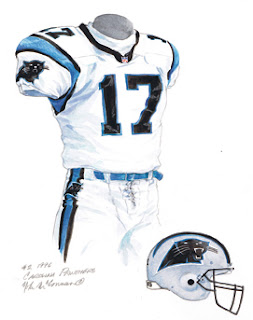