Mr. Polian What About the Cover-2 Corner? 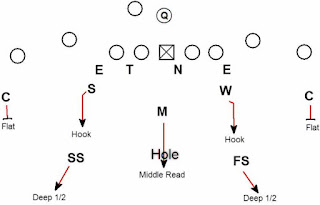 “That’s tough,” Hall-of-Fame GM Bill Polian said on the latest Talk of Fame Network broadcast. “I know too much. This is a dangerous place to be. I know what the safety position means to the (Tony) Dungy defense.

“There are three players in the Dungy defense that are the lynchpins of the whole the defense. First, is the 3-technique. That was Warren Sapp. Second is the will linebacker. That was (Derrick) Brooks. Third is the safety. That’s John Lynch. I don’t think I need to say anymore. Those are the three that made it one of the great defenses in the history of football for the time they played together.”

The Three-technique, the Will backer, and the strong safety? For the Dungy Tampa-2? We always thought the safeties were twin safeties, lined up just outside the hash marks and usually took 1/2 the field in the deepest zones. The Mike backer, or it could be the Will had the "hole" in the zone which allowed the safeties to cheat a bit outside because the backer who had the hole would prevent the Cover-2 defense from being split.

But what about the corners? The rerouting the run support, all the things they needed to do to help that Tampa-2 scheme work. If Polian got his wish and Lynch goes into the Hall of Fame ahead of Dawkins what comments will be for Ronde Barber? And of course, you have to have that edge rusher, no? That opens the door for Simeon Rice.

And don't forget the Mike, who often (usually) has that hole in the zone, just short of the deep 1/2 zones. Hardy Nickerson was that guy. Nickerson, in his Buc years was a five-time Pro Bowler. So really, is it six key players, not three?

The point is it seems like a slippery slope if the hierarchy of the positions in a specific scheme is even a consideration in a Hall of Fame presentation. As superiorly smart as Bill Polian is, this is a bit of a stretch.

Shouldn't the consideration, if one is picking between safeties, be which one was better on the field regardless of scheme?

Here are the stat charts of six key players: 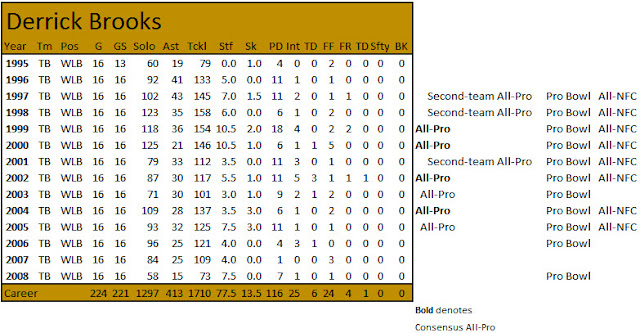 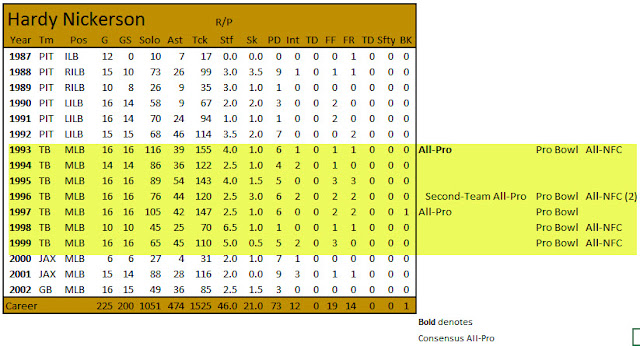 Hardy Nickerson was with the Buccaneers for seven years and was a five-time Pro Bowler and a two-time All-Pro in his Buc years.

Sapp, like Brooks, was a first-ballot Hall of Fame selection and he was a four-time Consensus All-Pro plus two more seasons as a Second-team All-Pro. In 2001 and 2002 there was not lots of great statistical seasons and therefore not much competition for the All-Pro teams. Sapp made it both years despite averaging less than seven sacks in those two seasons. And it cannot be argued that he was the guy not expected to get those big plays. Playing the three-technique gave Sapp all the advantages of making sacks and stuffs and when he was the Defensive Player of the Year it was due to his big plays/sack total. 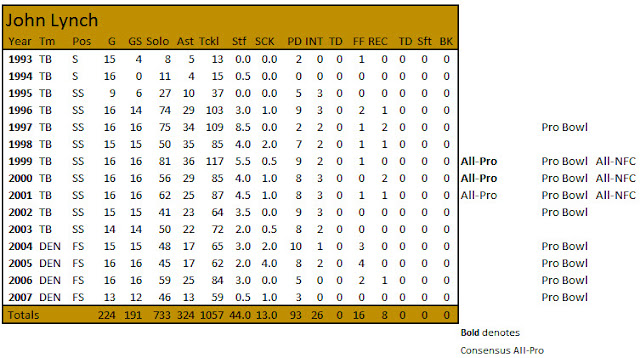 Lynch was a three-time All-Pro and a nine-time Pro Bowler. He had 26 interceptions and 13 sacks. 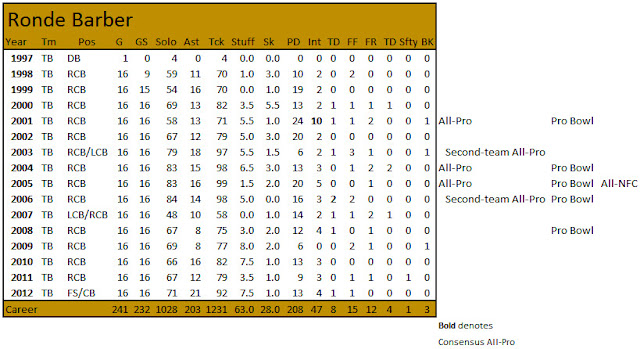 Barber was a three-time All-Pro and had 28 sacks as a corner, which is an amazing number. Equally amazing is his 63 run/pass stuff total. A run/pass stuff is a tackle for a loss on a run or pass play, that does not include sacks. Warren Sapp had 63.5 run/pass stuffs as a defensive tackle

Rice feels he was a key part of the Tampa Bay defense as the blind side rusher and he had big-time sack totals from 2001-05, totaling 67.5 in those five seasons and he feels that is enoug for the Hall of Fame.
Posted by John Turney at 5:15 PM