Not All Second and Third Place Finishes Are The Same

For the record, I don't have a horse in the race for the Pro Football Hall of Fame Class of 2018. There are a couple of players who I think are no-brainers, but that's just my opinion and it's worth no more than anyone else's opinion. Additionally, there is one player who I would rather not see get thrown into the Senior pool, a.k.a. "the Swamp".

I do think it is time for Terrell Owens to get into the Hall of Fame. Going in now, with the Class of 2018, puts him on par with Marvin Harrison who got in on his third try and whose career is fairly similar, even though their playing styles were not. However, if things do go the way I think they should it won't bother me because I just give opinions and do some research. I have no skin in the game—it won't be anything to get ugly over.

That said, I do wish those who are making the case for Owens and/or Moss would realize that there are some who look at the numbers of players in great detail. And it seems like the mantra of "he was second to Jerry Rice" in this or "third to Jerry Rice" in that is all we can read online in articles about these receivers. There is more to it in my view.

First, these writers and/or video/television commentators ought to know better. They have access to lots of information and the most basic of statistics, receptions, yards receiving and touchdowns are very easily found and the vast majority of the even the most basic fans know them yet they are repeated over and over. That is done to buttress the same argument we've heard for a few years, i.e. "the numbers alone say Owens or Moss (fill in the blank) should be a first-ballot Hall of Famer."

Since when does being second or third in a major statistical category guarantee first-ballot quality? Second is not first. Third is not first. We'd need to look a little closer, no?

Looking closer would be a simple qualitative analysis of those second and/or third place finishes. I guess because 2 comes after 1 they think it makes it sound like a close race but sometimes it is not. This is the "second and third" (if you will) the argument is always presented. And the numbers are almost always presented as though it was close, like a photo finish in a horse race. 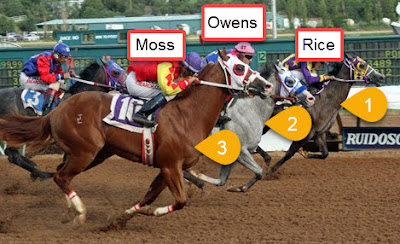 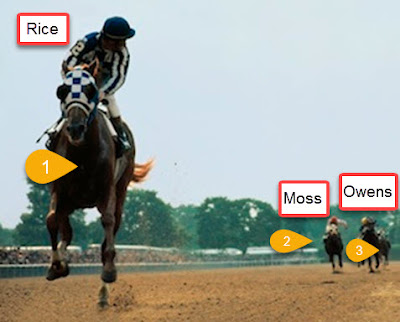 Rice's 197 touchdowns compared the 156 and 153 of Moss and Owens is more like this than the previous shot.

Here is what I mean:

Jerry Rice's totals in longevity, honors, statistics, and championships are on the top line. Owens and Moss are on the second and fourth lines. The third and fifth lines are percentages of what their totals are compared to Rice.

They played about 2/3 to 3/4 of the time Rice did. They were All-Pro less than hall the times of Rice, and that includes Pro Bowls. Neither Owens nor Moss was ever an Offensive Player of the Year of MVP, Rice was.

Statistically, they were about 2/3 to 4/5 of what Rice did, finishing a distant 2nd and 3rd in TDs and even less in yards and catches. To be fair, they had comparable yards per catch averages.

Further, they led the NFL and were in the top 10 in the NFL in receiving categories far less than Rice and finally, Rice has 3 Super Bowl Rings.

Everyone agrees Rice is the gold (G.O.A.T.?) standard. It just seems to me if they are going to use Rice's stats as a standard they should explain that while true (the "second and third" arguments) an intelligent and thorough examination shows that there is quite a distance between them and as such raised this question:  Are Moss and Owens Really Worthy of First-Ballot Hall of Fame Status?

Reasonable people can disagree, but by the same token, reasonable people shouldn't continue to shout out stats everyone knows and has already taken into consideration and come up with some more compelling evidence than just the "second and third" argument.

Finally, I reiterate, it would be great for Owens to get in this year. Most think he is a Hall of Famer and I certainly agree, I just felt there was a strong case that he and Moss are not slam-dunk first-ballot Hall of Famers.
Posted by John Turney at 2:34 PM