Stats You Need to Know—QB Hits 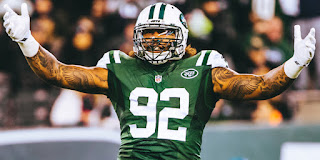 The NFL, through NFLGSIS, tracks QB hits and has since 1999. However, for some reason, they have always included some (but not all) sacks in that total. If a sack results in a quarterback fumbling then it is not a QB hit. Also, the way it is presented it gives a sack a "double count".

I've been posting a QB hit stat for a few years that is Hits on the QB sans any sack at all. Many NFL coaches (John Levra being one) had several levels of "pressure".

First was a sack, then a QB knockdown, then a QB hit, then a hurry—essemtially four levels of pressure. The NFL Gamebooks don't distinguish between hits and knockdowns but from observation, the "hits" are more often than not a knockdown.

So, in that spirit, we have the QB hits leaders (and knockdowns are included, but not sacks or hurries).

Leonard Williams led the league with 21 and is a classic case of someone not getting a lot of sacks (two) but putting good pressure on the quarterback consistently. DeForest Buckner is similar—though he had just three sacks he was one of the better 3-techniques in the NFL this season.

Aaron Donald did have 11 sacks and led all interior linemen and Chandler Jones led the NFL but they also each had 18 additional hits on the QB. Chris Long wasn't a starter, he played in nickel and as part of a rotation but led all non-starters in hits on the quarterback.

Long is the perfect example to explain the oddity with the NFL stats. Long hit 15 quarterbacks without sacking him, but also had 5 sacks so that totals 20. But the NFL credits him with 18 QB hits. That is because he forced fumbles on some of his sacks. Four to be precise. But for some reason two of them counted as a QB hit and two did not. I think the way we track QB hits is cleaner.
Posted by John Turney at 1:06 PM