Still a Key to Winning: The Defensive Passer Rating

By T.J. Troup
Though it is always a challenge to choose which aspect of football is the most important to winning, the defensive passer rating is still a key component in team success. What is the defensive passer rating? It's simply the passer rating almost all football fans are familiar with applied to the defense which I began applying to my own research in the late 1980s, long before the Internet as we know it today. My logic was simple—if a high number is good for the offense then a low number reflects well on a defense.

So, now that the final team stats are official, and the playoffs beckon; let's take a look at the defensive passer rating for 2017 as we celebrate Don Shula's birthday. For the first time in their team history, the Jacksonville Jaguars led the league (68.5), and have returned to the playoffs as a division champion.

Last season Mike Zimmer's Vikings finished 4th in this category (73.0) and improved this year to 3rd with their best record since 1998. There is a very real possibility that Minnesota will play longtime playoff rival Los Angeles in this year's playoffs. The Rams improved from a dismal 95.3 rating last year to finish 5th this year with a mark of 78.3.

For the past few seasons the porous Saints defense kept New Orleans out of the playoffs, but with a dramatic improvement from 98.11 a year ago to rank 7th this year at 79.0 they are division champions. For this year the record of the top 10 teams in this category is 101 wins and 59 losses, while the bottom 10 teams the record is 57 wins and l03 losses. Every year the defensive passer rating chart shows that success in this category usually leads to the playoffs or at least a winning record.

Has there ever been a season where this stat defines the playoffs and winning you ask? In 2007 the top 11 teams all made the playoffs and combined for a record of 125-51, while the bottom eleven finished 67-109.

In 2001 12 of the top 13 earned a playoff berth. Which year stands out historically? Eight teams would fight tooth and nail to qualify for the playoffs starting in 1970, yet the season of 1975 is still the benchmark as 7 teams made the playoffs. The combined record for those seven was 78-20, while the bottom seven was 25-73.
John Madden's Oakland Raiders played cohesive team pass defense in that 1975 season with the best mark in the last 43 years at 37.2. No doubt Jack Del Rio would still be employed if the Raider secondary this year came anywhere near that mark.

The Dolphins, in 1975, did not make the playoffs yet allowed only 9 touchdown passes to be thrown against them. Touchdown passes allowed is one of the four components in figuring this stat. Don Shula's teams allowed just 65 touchdown passes from 1970 through 1975.
Though impressive, Shula's Dolphins do not rank #1 for an 84 game stretch. The Minnesota Vikings from 1969 through 1974 allowed just 53, and their longtime rivals the Green Bay Packers under Lombardi allowed 61 from 1962 through 1967. 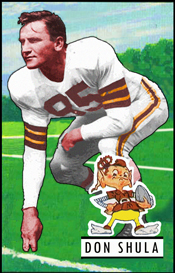 Shula's experience as a right corner for Cleveland, Baltimore, and Washington gave him a background as a player, while his experience as the defensive coordinator for the Lions from 1960 through 1962 helped further his knowledge of defending the passing game.
Now that this history lesson is complete, let's shift gears and ask a simple question—is there a team during this year's playoffs that will win on the road?

The reason I ask is that since the wild card began in 1970 there has been at least ONE ROAD VICTORY EVERY YEAR. Who will it be this year?
Posted by TJ Troup at 4:00 AM