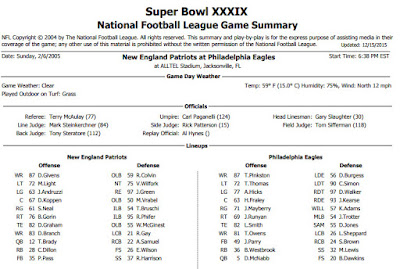 According to Michael Hurley's Twitter Account  Former Patriot Safety made this statemnt at a media availability today, "Rodney Harrison was like, "Do you remember in the Super Bowl against the Eagles, we started like six linebackers and one defensive tackle?""

Hurley then posted the starting lineup from that Super Bowl and it did show this: 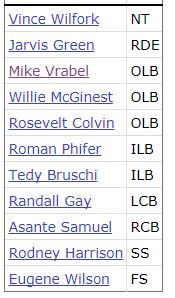 Yes, there are five linebackers, but the question is what position did they play?  It was 4-3 defense, Rosevelt Colvin and Willie McGinest were hybrid LBer/DE types, and they played DE in nickel a lot. The only difference here is they were 4-3 DEs in base, which McGinest did quite a bit in his career anyway.

Here is a screenshot of the first play, which is representative of the scheme the Patriots used early in that game:
Come on Rodney, it was likely a surprise because Patriots were a 3-4 team, but it was not a fancy scheme, with five linebackers and two linemen...it was a 4-3.
Posted by John Turney at 2:30 PM