Stats, LLC., has been tracking run stuffs since 1992. Run stuffs are tackles on running backs (or wide receivers on reverses or even a quarterback on a run) that result in a loss.

By adding run stuffs to sacks it gives a reasonable metric on the effectiveness of a front seven by tracking plays that end up in losses and put the opposing team behind the chains in terms of down and distance.

Here are the leaders in that metric in 2017:

Here are the yearly leaders since 2012: 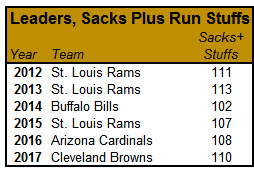