Joe Thomas Announces His Retirement from the NFL 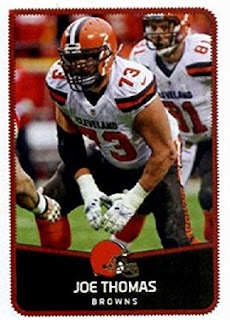 For offensive linemen the only real stats are their honors, i.e. the All-Pro selections and Pro Bowl selections that they garner in their careers.

Since the early 1990s Stats, LLC., though, as kept tracks of penalties linemen are flagged for and the sacks they allow. These stats, like many stats, are subjective and differ some from the coaches stats but they can give some indication.

Like Orlando Pace, he had an issue with false starts but his holding calls were just 1.5 per season. He allowed an average of 3.6 sacks per season which is lower than the other four but 1.5 to 2 sacks per season. 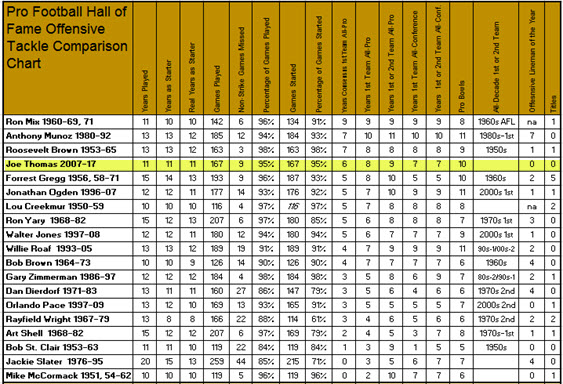 Thomas falls near the top, ahead of all the recent tackles with the exception of Anthony Munoz.

Certainly, we cannot predict what will happen in 2013 with regards to the Hall of Fame Selection Committee and how it votes, but we feel Thomas stands out as much as any player and we tend to think it will result in a first-ballot election to the Hall of Fame for Thomas. The only potential "negative" would be he played for a franchise that struggled and didn't get a chance for post-season play and additionally playing just 11 seasons is on the lower end of the spectrum. However, those things are far outweighed by the "positives".