STILL THE RECORD: Denver vs. Houston—December 1962 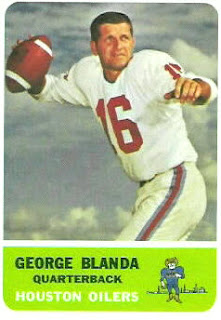 When Wally Lemm took over the Oilers during the 1961 campaign, he polished a "tarnished team" and went undefeated leading Houston to its second consecutive AFL championship. Lemm switches leagues to the NFL Cardinals, and former St. Louis head coach Frank "Pop" Ivy is now in charge of the Oilers.

Replacing Lemm as defensive co-ordinator and secondary coach is former Eagle Neill Armstrong. Philadelphia intercepted 8 passes against the Cardinals in '50 and Armstrong was part of that team (though he did not intercept that day). Armstrong is again going to watch his team intercept 8 times; this time against Denver.

The Broncos became revitalized in 1962 under Jack Faulkner and at one point with a 7-2 record still stood a chance to win the western conference, but a three-game losing streak has sent them to Jeppesen Stadium in Houston to take on the Oilers on a muddy field with the rain coming down. George Blanda leads the Oilers down the field completing 3 of 6 passes and kicks a field goal to put Houston on the scoreboard. Denver punts after three plays, and Blanda finds Cannon open for a 60 yard score and a 10-0 lead. 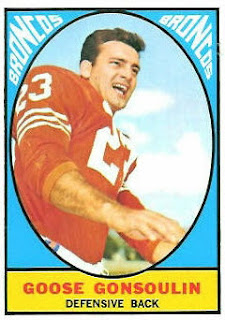 The quarter ends with no more scoring, and the only turnover is all-league left corner Tony Banfield's fumble recovery for Houston. Second quarter, and Denver recovers Cannon's fumble and scores. The best right safety in the early AFL was Goose Gonsoulin of the Broncos and he intercepts as Denver takes over on their own forty-four yard line. Tripucka completes six straight passes, and Denver scores again to take the lead 14-10. Blanda again misfires as linebacker Jim Fraser intercepts, but the Broncos cannot take advantage when Bobby Jancik of Houston intercepts a pass intended for speedster Jerry Tarr.

When Denver gets the ball back they are eventually faced with a 3rd and five situation deep in their own territory. Tripucka throws to Frazier who is blasted by linebacker Doug Cline; the balls goes up in the air and Banfield intercepts. Blanda again pitches to Cannon for the score and Houston reclaims the lead. Old pro George Shaw comes in for Tripucka yet he is also intercepted. Jim "The Blade" Norton returns 10 yards, but Blanda's errant pass is pilfered by corner Jim McMillin as the half ends. Houston 17 Denver 14, with an unprecedented 6 interceptions in the second quarter. Denver cannot move on their first possession of the second half. Right corner Mark Johnston of the Oilers blocks the punt, and there is that man again Tony Banfield who scoops up the ball and returns 21 yards. 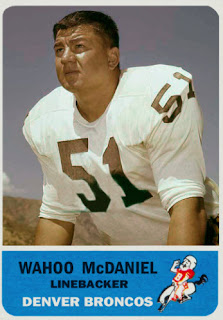 Blanda finds Hennigan open for the touchdown, and Houston ups it's advantage to 24-14. Tripucka's 3rd down pass is intercepted by linebacker Mike Dukes (today is his birthday). Houston punts and Tripucka locates Lionel Taylor for 27 yards which leads to a Mingo field goal and Denver is back in the game; 24-17. The quarter ends with Houston driving as Blanda continues to throw the J-5V pigskin almost every down. Wahoo McDaniel ends the promising drive early in the 4th with his interception. Jim Norton gets the ball back for the Oilers with his second interception. The Houston drive ends with a field goal and a 27-17 lead. 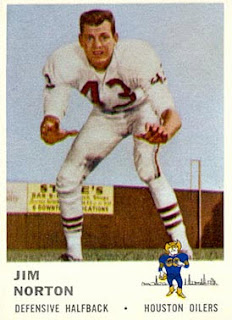 Shaw re-enters the game for Denver but his short pass is nabbed by Oiler defensive end Don Floyd who returns 28 yards and a touchdown. Second down and five for Denver,  and Dukes makes his second interception. The Broncos have now had 3 of their last four passes intercepted. Houston and Denver exchange punts, and Blanda keeps firing; Bronco defensive end Chuck Gavin latches onto a pass and returns 35 yards. Tripucka's long pass is intercepted by Norton. The game ends with Blanda doing what else? He passes on the final play of the game.

Will we ever see a game like this again? 97 passes attempted by both teams with nary a sack, and 13 intercepted (all from the second quarter on). Six interceptions in both the 2nd & 4th quarter. The game took only 2 hours and 27 minutes to play. Imagine how long a game like this would take today? The Oilers were 4-3 at midseason, yet much like '61 they continue to win and advance to their third straight AFL title game with a seven-game win streak. Denver ends the season with another loss and a final mark of 7-7 as Faulkner earns coach of the year honors.
Posted by TJ Troup at 5:23 AM