We like to measure statistics, whenever possible on a per-game basis. Career leaders are fine and we often use that metric as well, but in terms of comparison, we find a per game analysis is usually better.

That said, we found it very interesting that three of the active leaders in interceptions per 16 games were traded or released in the past couple of weeks—two of them going to the Los Angeles Rams.

Currently, Marcus Peters is the active leader in picks per 16 games with 6.8. He has quite a lead on Richard Sherman. Aqib Talib is tied for fourth with 4 pickers per 16 games. Peters and Talib are headed to SoCal and Sherman is going to NoCal (he signed a three-year deal with the 49ers on March 10, 2018). Damarious Randall was traded by the Packers to the Browns today as well. 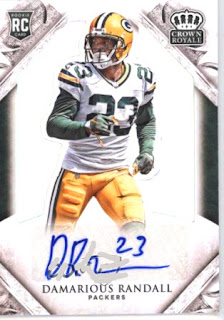 And these players are not "pigeons"—a cornerback who gets thrown at a lot because there is a shutdown cornerback on the other side of the defense. These are, for all intents and purposes, the shutdown corners on their teams—all except Randall being former All-Pros and Pro Bowlers.

Remarkably these are the top for interceptions per sixteen game leaders that are active in the NFL with Talib being fractions ahead of DeAngelo Hall and Kevin Byard with Peters just under 7 and Sherman just under 5 and Randall just over 4 picks per 16 games.

Here is the list of all players who played as recently as 2017 and average 2.9 interceptions per 16 games— 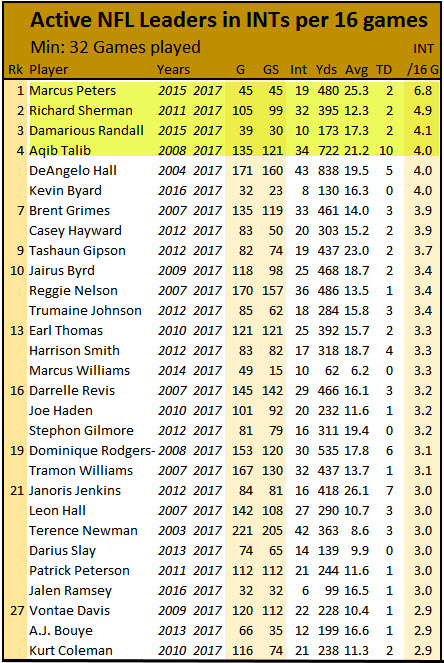 We will be doing some research to see if this has happened before, but we sincerely doubt it, we can hardly think of a time where so many All-Pro/Pro Bowl corners have been traded and/or released in such close proximity in time.

One note, since 2011 (Sherman's rookie season) NFL passers have been picked off at a rate of 2.6%. For comparison, from 1952-65 (Night Train Lane's 14-year career span) passes were picked off at a rate of 6.2%. Interceptions come at a premium these days with how the passing game has developed, i.e. interceptions are hard to come by now as opposed to previous generations.