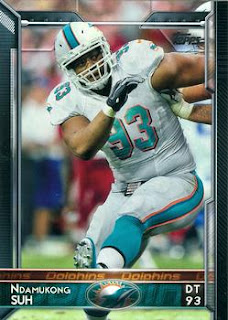 Yesterday Ndamukong Suh continued his tour of NFL teams interested in his services. Reportedly the Seahawks, Saints, Titans and Rams and perhaps the Raiders were the teams that wanted to kick the tired on Suh.

The media reports had a variety of opinions, which is to be expected. Shannon Sharpe and Skip Bayless of Fox were effusive about the possibility of Suh signing with the Rams. Bayless even felt that if Suh were signed he would make the Rams his favorites to win the NFC.

Colin Cowherd and Jason Whitlock were milder in their views—Cowherd: "Suh didn’t want to practice in Miami…he was not a good teammate. Whitlock: "Suh had his second chance in Miami and did nothing."

There was also diverse views about where Suh would play with the Rams. Because Rams 5-technique Michael Brockers has been a nose tackle and has played well there, he gives the Rams flexibility to play a signed Suh at either 5-tech or 1-tech (DE or NT).

Ryan Clark, as a guest on ESPN said Suh's best fit would be as a 5-tech in the Wade Phillips 3-4 and then as an inside rusher in the nickel/dime defenses.

As a refresher, Phillip's defense is a one-gap 3-4 defense. And they usually play an sink undershift, meaning on the weak side the end lineman sinks down to 3-technique. This is and has been Aaron Donald's position and there has been no talk of Suh supplanting Donald, the 2017 AP NFL Defensive Player of the Year—nor should there be.

Here are a few shots from last season (all credit to NFL Replay): 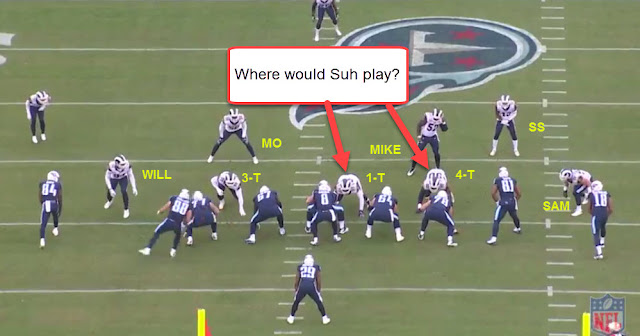 IF Suh signs with the Rams we will likely hear comments from the Rams that "Suh fits in any scheme" and "We want playmakers and Suh is a playmaker" or "He will be a fit for our rotation" and so on. And all that is likely true. But the question isn't IF a player can play a new position. It's HOW WELL he can get it done.

A nose tackle, or 1-tech, because of where he lines up will draw a lot of double teams. Double teams of a defensive lineman can come because he's excellent or sometimes they come due to the alignment which means no matter who that player is, he would get double teamed by the offense. Would the Rams want to pay Suh a lot of money to draw tons of doubles? Nose tackle is not a glamorous position, almost by definition, even in a one-gap 3-4 defensive scheme like Phillips's.

Would the Rams rotate Brockers back in there and get plenty of snaps for Suh over the tackle so he's not getting bounced around all day by the center and guard?

In 2017 the Rams had issues stopping the run which is why we are focusing on the Rams base defense here. Suh would, of course, play inside in the Rams nickel and dime and would likely compliment Aaron Donald on the interior of the Rams 4-man rush—sending Brockers to the bench. Brockers was a fine compliment to Donald on the interior in the Rams sub defenses but with Suh around he would simply not have enough speed to move outside so one of the Rams stud players would have his snaps cut.

Back to the base defense—as to Suh playing defensive end or 5-tech (Often head up on a tackle, i.e. 4-technique in Rams defense), how do they know what he can do? Suh has played some defensive end in a 4-man line in Miami, not a lot, but some, and usually in passing situations. We've seen four of his career sacks in that alignment. But that is different than a 5-tech in a 3-4.

There is literally no film for Suh as a 3-4 DE. He's never played it, he's never been asked to line up over offensive tackles. The answer from any 3-4 team that signed him and played him there would be "It's football. He's a football player, he can do it" and that's fair—to a degree.

What about experience—the computer file or Rolodex in the brain of a defensive linemen that catalogs all the plays in his career and what offensive linemen tries what trick on him in what situation? Suh's "book" is on guards and centers. Does he have a "book" on tackles? There is no way he could have.

Additionally, Suh has had a strength advantage over almost every guard or center he has faced in his career. If he lines up over a tackle, that strength advantage is neutralized to some degree. Tackles, in general, are larger, stronger and have longer arms than guards. There are times when some guards were just child's play for Suh. And there may be some tackles that will be, too, but there will also be some great athletes with length, size and strength.

Pro Scout, Inc., has been a professional scouting service that NFL teams have subscribed to since the mid-1970s. One of their axioms or "sayings" is "Don't move blues". "Blues" are top players and they advise against changing positions for top players. For Suh, we have no idea what their position is since their current evaluations are propriety, but their axioms are compiled over long periods of time and are pearls of wisdom they feel help NFL talent evaluators.

Someone who was familiar with being moved was Jack Youngblood. In 1983 the Rams moved to a 3-4 defense from a 4-3 and Youngblood had to play nose up on a tackle after player 12 years split a yard or a bit more outside of a tackle.

When asked about a potential Suh signing and a possible position switch,  Youngblood said, "Sure, he can do it. If you asked Merlin Olsen, in 1971 or 1972 when he was about 31 years old or so, to move to nose or D-end in a 30, he could play it but it wouldn't have been the same Merlin we were used to. . . (S)ame goes for Joe (Greene). yeah, he could have changed but again, he would have been the dominant tackle he was in the stunt 4-3 they played".

Essentially, Youngblood says that a 31-year old tackle, moving to end can be physically done, but unless you have the natural instincts of that position you are not going to be an All-Pro as you might have been before. Youngblood thinks Suh should go to a team that can win but also can put his skills to their best use, "Get him over a guard, like Donald or the kid here, (Gerald McCoy) or (Geno) Atkins and (Suh) will do his best work—that's where he's done his best work so far, why would it change NOW?"

So it seems the bottom line is that you can plug a good player into a position and you can tout him all day long, but if there is no film on that player at that position, there is no way to know if he can dominate at that new position. Until it happens it just a projection.

Finally, there is the issue of Suh possibly hitting some walls. He's going to be 31, this is his third contract and as Cowherd mentioned, Suh wore out his welcome in Miami.

Suh has not been First-team All-Pro since 2014 and has not had double-digit run stuffs since 2015. His hits and hurries and sacks are all declining. Individual stats don't mean everything but they cannot be ignored, either.

So, the Raiders see Suh as game-changer for a defense that Ranked 29th in DVOA? (DOVA is a defensive metric provided by Football Outsiders. The problem is the Dolphins were 28th in that same metric. How is Suh a game-changer? Only twice in his career has he played on a defense that was in the NFL's top 10 in DVOA.

This first clip is simply a 38 power run play, and a double team moves Suh inside, leaving big running lane to the right. Suh is the left defensive tackle here—
Again, a left defensive tackle, a double team by the guard and center move Suh back, at end he gets an assisted tackle as the back runs into him after a six-yard gain—
Even Shannon Sharpe, who was very positive about a Rams-Suh marriage said that Suh would benefit from playing next to Aaron Donald who goes 100% all the time all but admitting Suh has a reputation for not always giving top effort, i.e. dominant for a few plays, then disappears for a quarter-and-a-half. Youngblood also added, "And remember, you do have a character issue with the young man, stomping on hands or legs, or whatever".

Finally, there are the penalties. Pro Football Focus shows Suh has been flagged 82 times in his eight seasons, NFLGSIS shows 75 penalties with 14 of those being the 15-yard variety of personal fouls, unnecessary roughness and the like. If Aaron Donald has shown a weakness in the last couple of years it's getting frustrated and getting late hits, personal fouls and being ejected for such. Would Suh be a positive influence on the younger Donald or a negative one on this front? No one knows, but it's fair to raise the question given Suh's history of what Youngblood calls a "character issue".

We will know soon if there is going to be a Terrifying Triplex or a Terrible Triplicity in LA. We already know it's not a new iteration of the Fearsome Foursome.
Posted by John Turney at 4:12 PM