Rams Create a "No Fly Zone" Secondary, But What About the Front? 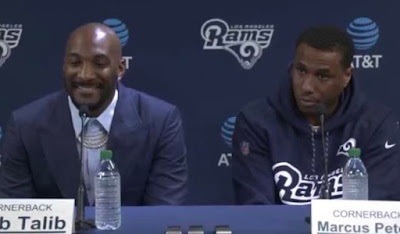 That's quite a lot of draft picks moving back and forth, but to make some sense of it, we can use the   Draft Value Chart, purportedly invented by Jimmy Johnson to weigh the value of those picks and come up with a net value. The chart assigns a numerical value to each of the picks in any given NFL draft and by using the chart, teams can more accurately trade picks and players.

Since the chart's publication, many more supplementary picks seem to be added so it DOES skew the chart a little bit, but in most cases, we are just talking about a handful of "points" and here it involves a lot of 4th, 5th and 6th round picks. In the case of future picks, they are estimated by discounting them one round and it is assumed they will be in the middle of the round. So here, the 2019 2nd round pick would be a mid-3rd rounder in 2018.

So, here is the list of players and picks for these recent trades— 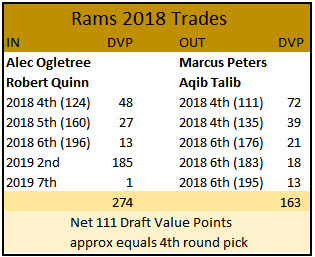 So, all told, the net effect of the trade is Ogletree and Quinn and a 4th rounder traded away in order to receive Peters and Talib.

So, it would seem the Rams have the makings of a great secondary with these two corners, All-Rookie John Johnson III and free safety Lemarcus Joyner who was franchised tagged and nickel back Nickell Robey-Coleman.

The Rams also generated 48 sacks in 2018 which was fourth in the NFL. Of those, Quinn had 8.5. He had six of those sacks as a right defensive end in the nickel and 2.5 when playing WILL backer in Wade Phillip's defense. It's not a huge number to overcome. And the Rams have Aaron Donald, the Associated Press NFL Defensive Player of the Year who is the best inside pass rusher in the NFL.

All of the above suggests that the Rams will have the talent, at least, to stop the passing games of their opponents and in a league that passes as much as the NFL, that is extremely important.

However, even though many folks in the metrics crowd don't think stopping the run game in the NFL is not as important as it was in the 1970s or 1980s, it's still important to NFL coaches. Also, the last three Super Bowl champions have stopped the run at a rate of 83.8 yards a game and an average carry of 3.6. The last three Super Bowl losers allowed 102.6 yards rushing per game at a 4.4 yards per carry clip (4.6 yards per carry for the last two losers).

All of this begs the question of if the Rams are going to be able to have a front seven or six (in case of nickel defenses) that can stop the run.

Donald, the NFL's best defensive tackle, averaged 12 run/pass stuffs per year in the 4-3 defense as a 3-technique. In the 3-4, still as a 3-technique, he had 11 sacks, tying a career-high but his r/o stuffs dropped to 6.5. When adjusted for the two games he didn't play it's 7.5 r/p stuffs. 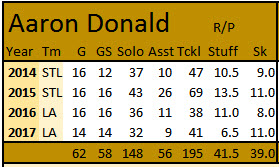 Here is how it is explained. You can click here to read more.

We have taken the liberty to combine 22 years of data for the Rams and created this chart: 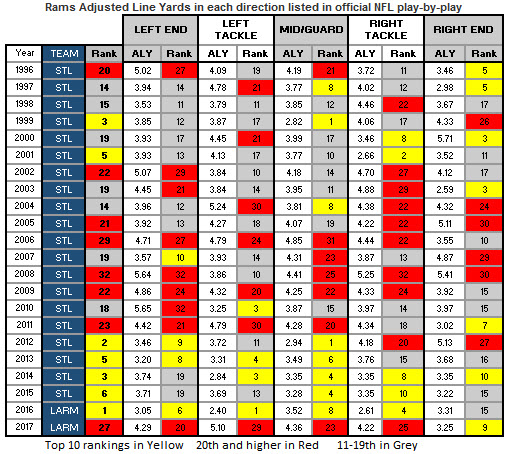 The yellow cells in the above chart represent a top 10 finish for the run stopping prowess of the Rams. Grey is 11-20th finishes. Red represents the bottom finishes, 20th and higher.

From 2012-16 the Rams were in the top six in the NFL every season. The only "red" finished for that group were in 2012 on the right end and right tackle categories, meaning runs going to that side.

As can be seen, the Rams fell to 27th in the NFL in 2017 and were in the "red" in everything except at right end. So, this is one more data point to ask some questions.

Courtesy of Pro Football Reference here is a more straightforward look at the Rams run defense: 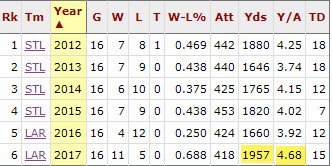 Certainly, there is room for improvement. Seeing these things and more could be why the Rams thought they could afford to send Ogletree and Quinn away. The question is who will replace them.

Samson Ebukam backed up SAM 'backer Connor Barwin but could likely move to the weak side and replace Quinn. Of course, that leaves a hole on the strong side, but Barwin could be brought back.

At the MIKE position, where Ogletree played, it is unclear who would play there. Yesterday Les Snead suggested Cory Littleton would play a large role, but it was not clear where that would be. If the Rams are planning to jettison MO 'backer (Weak inside linebacker) Mark Barron, Littleton could step in there where he played some in 2017. He didn't take many (if any—we never saw any) at MIKE.

The Rams went through three nose tackles in 2017. Michael Brockers began the season there but was moved to 5-technique (defensive end) when rookie Tanzel Smart took over the position. Smart did not excel and a defensive end—Ethan Westbrooks finished the season at the nose. Westbrooks had experience as nose since he had backed up Michael Brockers at the "shade" position in 2015.  Additionally, Tyrunn Walker started one game at nose, and backed up all the starters for most of the season.

Here are the Rams front seven starters in 2017. (Note: This differs slightly from what the Ram organization published but ours is based on still shots from the game, rather than the Gamebooks, which while good, sometimes can contain errors. This chart is accurate). 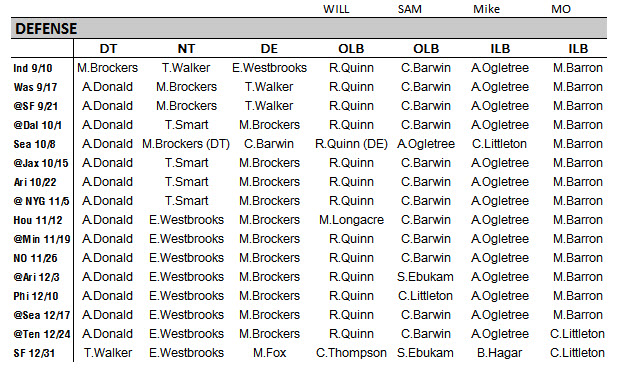 So, who will be the 2018 starter? Brockers excelled at 5-technique (though he was excellent on the nose as he had been his entire career, especially since being a dedicated "shade" beginning in 2014. Will Smart improve enough to start? Westbrooks, who makes some excellent plays and then sometimes seems maybe just above average, is on the smaller side.

Since the late-1990s Phillips had had several types of nose tackles. He's had All-Pro/Pro Bowl 350 -pound giant-types in Ted Washington and Jamal Williams. He's had smaller (295-ish pounders), quicker types in Ed Jasper and Pro Bowler Jay Ratliff, and Shaun Cody  In Denver Phillips had Sylvester Williams who was more in the middle in terms of size, at a listed 313 pounds.

So, it is tough to tell what direction the Rams may go. Could they stand pat with Westrbooks? Give Smart another shot? Bring someone in? Draft someone?

The same goes for the MIKE and MO positions as well as the OLBer spot, the one where Ebukam does not play.

One thing is not "for sure" but if the last few Super Bowls are an indication, stopping the run may be more important that some of the metrics crow suggests.
Posted by John Turney at 3:32 PM