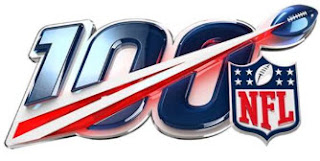 The first 25 years of the NFL could be called the Pre-WWII era—the golden era of Two-Way Players.

When the National Football League was organized in 1920, substitution rules permitted a withdrawn player to return only once during the game, at the beginning of a subsequent period. This rule was liberalized in 1922 to permit a player withdrawn in the first half to return at any time during the second half, but he was still limited to returning once. A player withdrawn in the second half could not return. Another change in 1932 permitted a withdrawn player to return at any time except in the quarter he was withdrawn, and a 1938 change permitted two players withdrawn during the fourth quarter to re-enter once.

As a result, players participated on both offense and defense. Starters, if they left the game, were generally withdrawn in the middle of the second period, then returned in the middle or late in the third period.

On offense, most teams used the single wing, the Notre Dame box, or a variation of these offenses. The Tailback, who received the snap, was about five yards behind the center, with the Fullback to his right and slightly ahead of or parallel with him. The Wingback aligned a yard outside the right end and a yard in the backfield. The Quarterback, who was a blocker, lined up just behind the gap between the right guard and tackle.

The first era during this period is from 1920-1932 where passing was still limited with the “college rule” of passing that had to be five yards behind the line of scrimmage” and no hash marks on the field. Whereas a play that went to the sidelines or out of bounds had to be put into play right there. Most offenses punted or simply ran the ball back into the middle of the field. After the famous indoor game in 1932, between the Portsmouth Spartans and Chicago Bears, the NFL decided to open up the “pro game” with new rules- passing from anywhere behind the LOS, hash marks and putting the field goal posts at the front of the endzone to encourage more field goals. All of this helped the pro game separate itself from the collegiate game and gave fans more excitement on the field on Sundays.

Single-Wing:
The single-wing formation depended on a center who was skilled both at blocking and at tossing the ball from between his legs to the receiving back. The center had to direct the ball to any of several moving backs, with extreme accuracy, as the play started.

The direct snap or toss from the center usually went to the tailback or fullback; however, the quarterback could also take the ball. The tailback was very important to the success of the offense because he had to run, pass, block, and even punt. Unlike today, the quarterback usually blocked at the point of attack. As with his modern-day counterpart, a single-wing quarterback might also act as a field general by calling plays. The fullback was chosen for his larger size so that he could "buck" the line. This meant that the fullback would block or carry the ball between the defensive tackles. The wingback could double-team block with an offensive lineman at scrimmage or even run a pass route.

The next era from 1933-1944 would be the opening up of the pro game with passing legal from anywhere behind the line of scrimmage, hash marks on the field, and moving the goalposts from the back of the endzone to the front, to encourage more kicking with field goals. These rules opened up the sport, scoring went up and the players took off.

T-Formation:
Predominately used by the Chicago Bears, this formation took off around the football community after the Bears 73-0 massacre of the Washington Redskins in the 1940 NFL Championship Game. This formation had the quarterback under center to take the snap. The Bears added a man-in-motion to give the offense more flexibility and deception.

The passing game’s growth also occurred as this era progressed, although the NFL had good passers from the start. Throughout this era, the ball also changed. It was between 22 and 22½ inches around the belly, which became between 21¼ and 21½ in 1934. (The size of the ball was further reduced in 1988 when it became between 21 and 21¼.)

Defense:
“You can’t win a ball game with a million points if you let the other fellow score a million and one,” wrote Potsy Clark in his coaching manual, Football, in 1935.

On the other side of the ball, most defensive alignments saw an 8-or-7-man fronts; that eventually turned into more 6-man fronts, especially by the 1930s. The “Cup” Defense had a 7-man front with four secondary players (LHB, RHB, QB, FB)…while other teams could also use the 6-3-2 look or the 6-2-2-1 defense (where the center drops back into coverage to help the fullback in the secondary.

During the seasons of 1943-1945, there was free substitution, but players continued to play on both offense and defense, and there was no utilization of offensive and defensive platoons.

Starting tomorrow Pro Football Journal reveal its lists of the Greatest Players from the Two-Way Era (1920-1944). There will be a list for 8 different positions: