The Rebirth of the Shotgun Offense 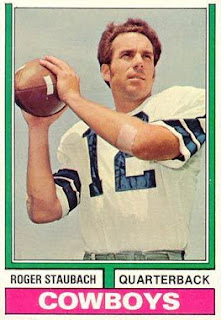 In 1974, the Dallas Cowboys had experienced their first non-playoff season for the first time since 1965. That result presented the team and their coaching staff with a dilemma of sorts. Their offense did not have a superior running game, and their passing game, though good, was not exactly striking fear in the hearts of opposing defenses across the league. They had a pretty good offensive line, and their starting quarterback—Roger Staubach—was considered by most experts and fans across the nation as one of the best quarterbacks in the NFL. But how was their offense going to make amends to missing the playoffs in 1975?

Dallas head coach Tom Landry came up with an answer to that question in 1975, and his decision back then would change the look of pro football offenses for generations to come.  It was called for posterity the “Shotgun Formation.”  Landry instructed Staubach to set up five to seven yards behind center on long yardage situations (usually on third downs, when more than five yards were required to move the sticks). The idea was not new, as former pro coach Red Hickey (and others) were the first to utilize this strategy, way back in 1960. But the idea was reborn by Landry more out of common sense than anything else.

“I’ve always felt that it was a little foolish to stay under center when everyone knows you’re going to pass,” said Landry, who always referred to the shotgun formation as the spread formation.  “Meantime, they (the opposing defenses) are putting in special defenses to stop the pass.”

Landry added several flourishing additions to the traditional shotgun offense that the Houston Oilers employed during the 1970 season, then their starting quarterback (Charley Johnson) took most of his snaps eight yards behind center. Johnson had suffered a shoulder separation early in the season, but he was Houston’s only hope for producing a competitive season. To keep playing, Johnson wore shoulder pads much larger than what he usually wore, and both he and Oilers head coach Wally Lemm hoped and prayed that the ball would be thrown before a charging defensive lineman could penetrate too far into the passing pocket. 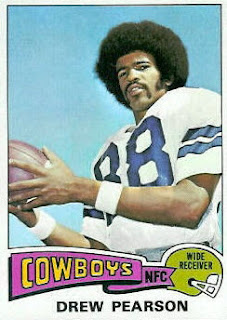 Landry’s implementations for the shotgun (er, spread), included using his running backs on sneaky little shovel passes from Staubach -- in addition to longer throws downfield to wide receivers like Drew Pearson, Golden Richards, and tight ends Billy Joe DuPree and Jean Fugett.  Landry’s modernizations of the shotgun added greatly to the unpredictability of the Dallas offense.  It also helped Staubach’s completion percentage go up, and that was added to the accepted threat of dealing with Staubach running with the ball himself. 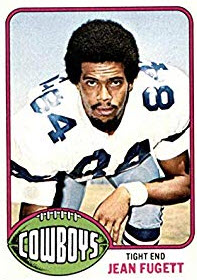 “I think a mobile quarterback is an asset,” Landry admitted.  “If you don’t have that outlet to run or move quickly, then you’ll get a lot of (quarterback) traps and your percentage of completions will go down.”

Staubach and the rest of the Cowboys offense experienced immediate positive results with their new passing strategy. They surprised the Los Angeles Rams with an 18-7 win on opening day. Later in the season, Staubach was able to utilize the shotgun at Philadelphia to connect with Drew Pearson on a touchdown late in the fourth quarter, and again on a key sideline pass with just a handful of seconds remaining, which set up the winning field goal as time expired. That extra time in his passing pocket was most beneficial to Staubach, and to Dallas as a whole.

“I see much better from it,” said Staubach. “I can scramble better. I don’t feel surrounded.”
While many opposing defenses derided the Dallas shotgun as nothing more than a gimmick, they were also faced with trying to devise a strategy to stop it. Some defenses might have good pass rushing personnel, which could put at least some semblance of pressure on Staubach.  Other defenses would concentrate on giving tighter coverage to Staubach’s receivers. Regardless of what tactics that Dallas’ foes used to counter the shotgun attack, the Cowboys still managed to increase their completion percentage, their first downs through the air, and their passing touchdowns in 1975. One statistic that Dallas had fewer of, thanks largely to the shotgun, was sacks permitted.

As the 1975 regular season wore on, Landry, Staubach and Company were getting more familiar with the shotgun and more comfortable in using it on more situations, even when they were not expected to throw the ball. The success of the shotgun offense eventually helped to pave the way to important Dallas victories over New England, Washington, and the New York Jets, and to a Wild Card berth in the NFC playoffs.

The Cowboys would enter their contest at Minnesota in the divisional playoffs as a decided underdog. Despite dominating the Vikings in virtually every statistical category, Dallas trailed 14-10 with less than a minute to play.  Deep inside their own territory, Staubach employed the shotgun for two deep passes. The first was on a 4th and 16 situation, and it resulted in a clutch catch by Drew Pearson along the sideline for a crucial first down.  The second was destined to become one of the greatest plays in pro football history. 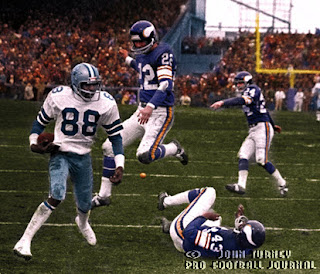 From midfield and with only 32 seconds left on the clock, Staubach reared back from his shotgun stance and heaved the ball deep for Pearson once again.  Miraculously, the original Hail Mary Pass nestled against Pearson’s hip as he strode into the Minnesota end zone. The Cowboys upset the Vikings, 17-14, and the shotgun offense claimed what was probably its most famous episode.

The next week in the NFC Championship Game, the host Los Angeles Rams were smarting for a revenge victory over Dallas. Remember, the Cowboys had upended the Rams in the 1975 season opener. In the NFC Title Game, however, the Rams simply could not contend with the Dallas Doomsday defense, a unit which played its best game of the year. The shotgun also experienced a wealth of success against the Rams defense. Staubach threw four touchdown passes in the 37-7 massacre.  Dallas was now a Cinderella team that was headed for Super Bowl X and a matchup against the defending world champs, the Pittsburgh Steelers.

Pittsburgh’s Steel Curtain defense had two weeks to prepare for the shotgun, and they made the best use of that study time. The Steelers had the defensive personnel to sack Staubach seven times in the game (a Super Bowl record at that time), and to cover (and eventually hammer) the Dallas receivers during most of the game. Pittsburgh prevailed, 21-17, but given how far the Cowboys had traveled -- from failure in 1974 to a Super Bowl berth in 1975—there could be no denying that the shotgun offense was a huge success.

“What we were trying to do was twofold,” explained Landry.  “(First)…spread the defense and give our quarterback a little more time to read the coverage.  He picks up a half a second or more when he’s back five yards from center. And (second), he sees so much better. He can read defenses in a hurry.”

Today, every NFL team and most college teams employ some sort of shotgun plays in their respective offenses, lending even further credence to the importance of using the tactic. Many offenses today use it as their primary offensive formation.

The rebirth of the shotgun offense was just one of many reasons why Tom Landry was enshrined in the Pro Football Hall of Fame in 1990.

(Pro Football Journal Note: Pro Football author and historian Joe Zagorski has two upcoming books that will soon hit the market. The Year the Packers Came Back: Green Bay’s 1972 Resurgence (McFarland and Company, Inc., publishers), and America’s Trailblazing Middle Linebacker: The Story of NFL Hall of Famer Willie Lanier (Rowman & Littlefield, publishers), will both be available on the Amazon website).