What a Nightmare—How Can HOF Voters Separate the OLBers with So Many Excellent Ones? 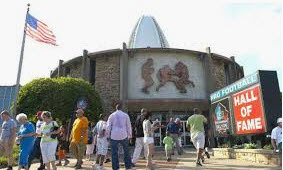 With the upcoming 2020 Centennial Class for the Hall of Fame, we've read quite a few named that are being pushed or looked at. Many of them are outside linebackers. And for the life of us, they are hard to distinguish one from another. Their credentials are all similar.

Here are the current OLBers in the Hall of Fame.
(click to enlarge) 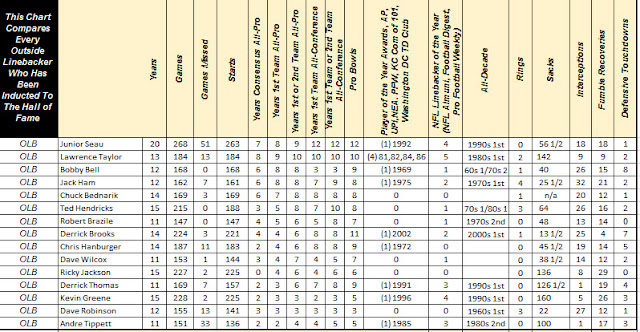 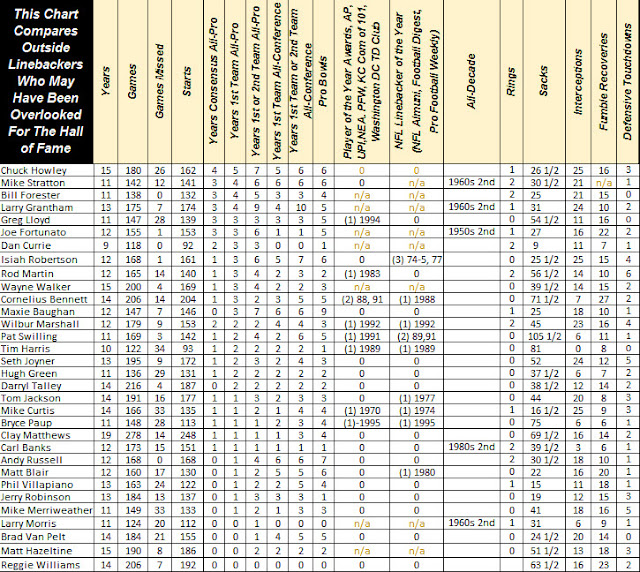 In the 1960s there were not true All-Pro teams, really, until 1969. Most of the selections for outside linebackers in the era are All-NFL and All-AFL selections. Five of the first six we list fall under that category.

Mike Stratton was a Second-team All-1960s for the AFL and was All-AFL four times. Larry Grantham's credentials are almost identical to Stratton's. But it's hard to gauge greatness in terms of honors with both leagues picking All-League teams

Bill Forester, Joe Fortunato and Dan Currie were corner linebackers (as they were called then) around more famous middle linebackers. They would have been competing for All-Pro honors in the early-1960s before there were combined All-AFL/NFL teams. So who was better? Hard to tell.

Maxie Baughan has nine Pro Bowls, which is the most among the waiting linebackers, and he has three All-Pro seasons, though none were consensus. He is seemingly getting some traction based on some recent articles. However, the negatives would be that a couple members of the Fearsome Foursome didn't think any of the Rams linebackers were "very good" and that the line and secondary had to cover for them some. Perhaps he was better with the Eagles.
Still, it seems Chuck Howley is the strongest candidate his honors are about the same as Dave Robinson, Dave Wilcox, and Chris Hanburger—the outside 'backers from his era. His stats are very similar as well.

So the question is why has Howley been overlooked? We don't know. Pro Football Researcher Association's founder, Bob Carroll, was a big fan for Howley. Though he admitted a personal bias in that they had a West Virginia connection.  Howley also has the endorsement of Paul Zimmerman who says Jack Ham and Howley were the two best cover linebackers he ever saw and as far as we know there is not a West Virginia connection there.

We could be wrong but it seems Howley has not gotten as many recent mentions as Baughan and we can only speculate it's because there are two other Cowboys who were 1970s All-Decade picks (Cliff Harris and Drew Pearson) who have gotten a lot of buzz. However, even though Howley wasn't All-1960s you could argue he would have been a better choice than Larry Morris. Nonetheless, for whatever reason Howley wasn't All-Decade but he was All-Pro more often than Harris and Pearson and has a ring and also a Super Bowl MVP. It will be interesting to see how it shakes out.

Clay Matthews is still a modern candidate so he's not in the so-called 'senior swamp'—but his time is running out. He was named by Mike Giddings as one of the two outside linebackers of his scouting service's era that is Hall of Famer-worthy. He was a linebacker who was more of a complete/cover 'backer earlier in his career but evolved as a guy who put in hand in the dirt on third downs as a rush backer-type. We won't hear about his candidacy until later in the Fall when the modern candidates are narrowed to 25, then in January when they are cut to 15. 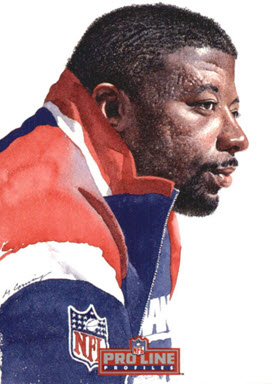 Carl Banks is interesting in that he has very few honors—One All-Pro season (though his 1989 season was certainly All-Pro level) and was a Second-team All-Decade. He has two rings and was a tremendous run-stopping strong-side linebacker in the Giants 3-4 defense. However, he's had almost no HOF buzz since he became eligible for the HOF in 2001.

Rams outside linebacker Isiah Robertson has quite a few honors but many of his Rams teammates thought he made to many errors to be a HOFer. Yes, he made some huge plays, too, but was not consistent enough.

The rest of the players have some good things about them, but may not have the numbers, honors, and testimonials of some of the one's we've mentioned.  But, we could be wrong, there could be a darkhorse among them.

Art by Merv Corning
Posted by John Turney at 5:49 PM