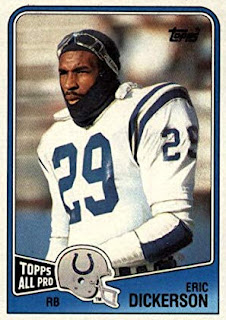 So much talk in the sports world these days is about ‘player empowerment’ particularly in the NBA where it has essentially taken over the league. Though it’s difficult to see the actions of Le’Veon Bell or in the past few days Ezekiel Elliot and suggest its not at play in the NFL as well.  Even in the NFL this isn’t really new, think back to Eli Manning, Bo Jackson, or JohnElway in the draft . . . or working your way out of town while doing situps in your driveway!

So who are the NFL’s all-time hired guns, mercenaries willing to go anywhere to play another day for pay?  How can you measure such a thing?  First, a hired gun must be good, a quality player, many players have bounced around multiple teams but frequently this isn’t driven by the player themselves but rather teams’ unwillingness to invest in them long-term; think Ryan Fitzpatrick. So let’s start with players who at some point in their career were All-Pro’s, these are players with leverage, the ones teams want. They must have played for at least three different teams as a single move is often attributable to a change in scheme, or coach, or a team parting ways with an aging vet.

Finally, the player must have played well in his stops to avoid the ‘aging vet’ scenario; Jared Allen wasn’t a mercenary when he went to Carolina, he was trying to hang on at the end of a phenomenal career.

We’ve come up with a fairly simple way to identify the mercenaries of all-time, take the value of a player’s peak season from each team and add them together.

An example, who was more mercenary Eric Dickerson or Tony Dorsett?  The former had just over 13,000 yards the latter just under 13,000, but Dickerson produced his yardage across 4 different teams and only his final season in Atlanta could really be described as hanging on. Using our method, Dickerson gets credit for 4,584 yards across the four different teams and Dorsett gets 2,349 across two teams, this certainly passes the eye test, Dickerson was a mercenary, Dorsett was not. 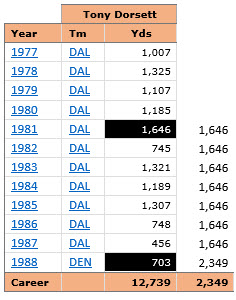 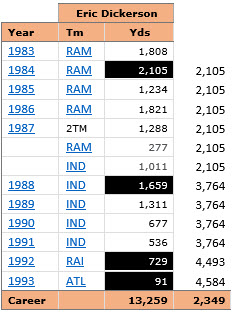 But how do we compare across positions, after all DeionSanders needs a fair shake in this fight.  Not our favorite metric, but one publicly available is Pro Football Reference’s Approximate Value (AV).  Not arguing the merits of the measure – as I have many misgivings – but it is a way to quantify by some measure the value players have created across positions. We take essentially the same as the Dickerson-Dorsett approach but using AV to compare across positions. This does limit us to post-1960 as that’s the period where the metric is available, which we think is fine as there was generally less player movement in the ’40s and ’50s. 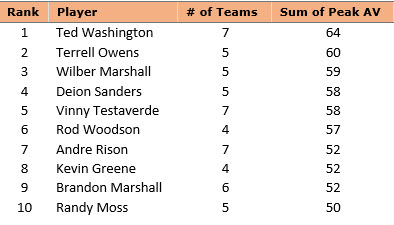 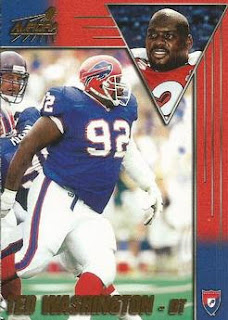 This might not feel intuitive at first, but Washington was an All-Pro and played in many Pro-Bowls as well, he played from 1991 to 2007 a full 17 seasons, played for seven different teams, twice he played for a team for a single season, three times just two seasons. While he certainly wasn’t the first name to mind, it does appear that Washington fits the criteria well, odd as the son of a man who played his entire 10-year NFL career with a single team. 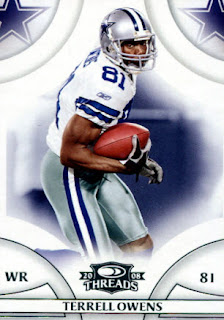 In the second spot, an intuitive choice shows up. TO bounced all over the league, often leaving unhappiness behind, but he always produced with 1,000-yard seasons with the 49ers, Eagles and Cowboys and – often forgotten – he had a near-miss with 983 in his final season with the Bills.  He may have been miffed about not being first-ballot Hall of Fame, but to our mind he’s an absolute first ballot Mercenary. 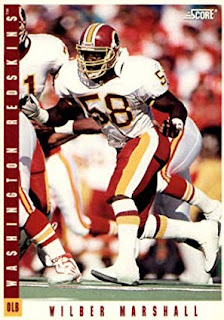 Wilber Marshall brings a slightly different feel to the list, was he a mercenary, or simply a man willing to follow Buddy Ryan around the league late in his career, we think more the latter.
Then there’s Deion Sanders, we think there’s no doubt he belongs high on the list, the man was the inspiration for taking on the exercise to begin with. Like Elway from the prior decade, he used baseball in part as a wedge between himself and his first team. In San Francisco in ’94 he found a team on the cusp of winning, and willing to put up with him being in for a partial season to get them over the Cowboys hump.

Then, in the ultimate mercenary move, after leading the 49ers over the Cowboys in ’94 he switches teams in ’95 going to the very same Cowboys picking up a second straight Super Bowl ring in doing so. After a series of All-Pro seasons in Dallas Deion signed with divisional foe Washington in 2000, again moving away from a team to join a hated rival. He wasn’t done, posing a 52.5 passer rating against in 2000, but decided to hang it up after the season likely due in-part to the lackluster 8-8 Redskins team. 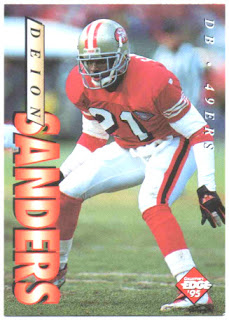 Finally Deion came back in 2004 to join a Baltimore Raven team that was loaded on defense which will – in all likelihood – send four players to the Hall of Fame once Reed and Suggs are qualified.  He played quite well in ’04 as well with 3 Int’s and 0 TD’s allowed, then in 1995 it was over.

Next on the list, Vinny Testaverde feels a bit more like Ryan Fitzpatrick than we’d like, at his best he was a quality QB but was rarely someone a team wasn’t looking to upgrade from or use as a plan B.

Rod Woodson checks in at the next spot and is the highest of any player with just 4 different teams, remember more teams more peak seasons to add, in other words, Rod Woodson was probably most consistently a quality player across all the teams he played for.  This does pass a basic smell test, he was a Defensive Player of the Year for Pittsburgh and led the NFL in interceptions when he was with both the Baltimore Ravens and the Oakland Raiders.

Andre Rison is an interesting case mercenary or malcontent, I tend to think more the latter. Rison was the very rare example of a highly drafted player who had an excellent rookie season only to get shipped off the next season and start his second year with a different team posting his only All-Pro season in year-two with the Falcons. 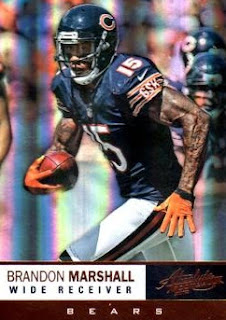 Brandon Marshall and Kevin Greene are next on the list. Greene might have come out higher had we allowed players credit for multiple stints with the same team. We thought about this scenario and thoughtfully decided to exclude it as so frequently there’s a return to where a player either started or spent a meaningful portion of their career, hard to be called a mercenary for coming home again.  Does Brandon Marshall find his way onto an NFL roster this year and break the tie; hard to see, but he could be no more than a training camp injury away.

The final name on our list is another familiar one and the fifth Hall of Famer on the list. Moss came back from lost time in Oakland to have one of the all-time seasons for a wideout in his first season with the Patriots. After his time with the Pats Moss rotated though teams but was never the same impact player again.

Who is the current generation, could we see Le’Veon Bell added to this list, Odell Beckham, others?  It may never be the like the NBA – and we certainly hop not – but with Bell and Beckham it’s becoming increasingly clear that while the teams may still hold more power, the balance is tilting in the players’ direction with every passing season.
Posted by John Turney at 3:54 PM