Did the HOF All-Decade Teams Have First-teams Prior to 1970s? 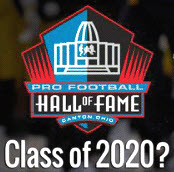 Earlier today Hall of Fame voter from the Houston Chronicle's John McClain listed the Pro Football Hall of Fame All-Decade Team members who are not yet in the Hall of Fame. He stated he stopped at the 1980s because many of the 1990s selections are not eligible to be a senior candidate. And he also wrote, "I only included the first teamers from the 1970s and 1980s, which was the first time the teams were split into two."

Actually, that is an oddity. Originally and then again recently the Hall of Fame did list all the All-Decade picks together. However, there was a time in the Internet-era (we think around 2000-2007) that the HOF listed only the First-teams.

We don't know why we got the glimpse into the top players being separated from the Second-team or runners-up or honorable mentions, or whatever they can be called. They did that for the 1920s-1950s, but not the 1960s. But the 1960s had a newer, Combined All-1960s team that included both AFL and NFL players.

The team was published in the NFL 75th Anniversary Book and here is the art the accompanied the 1960s Team, which, in our view should be the official NFL 1960s team. 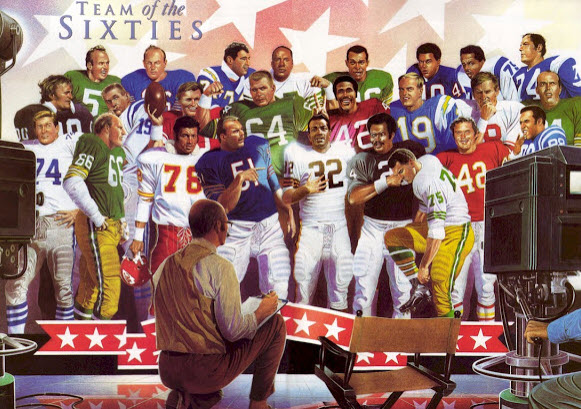 We've posted on these subjects before—1920s, 1930s, 1940s, 1950s, 1960s, 1970s, 1980s, 1990s, and 2000s. These are the posts that we listed the Combined All-Decade Teams by decade to show that others, aside from the HOF committee picked teams as well. And when they are combined and players appearing most often are considered "consensus picks" we can see who the ones who were considered the best are. Sometimes (and we've written this as well) the official HOF All-Decade teams made errors, and that's not a rip on the selectors, it's just that with any process that involves humans there will be mistakes.

Please understand, we are certainly not calling out Mr. McClain or any of the voters out on this, we simply doubt they were able to capture the information as we were able to do.

So, here is McClain's list. He only uses the official HOF teams, which is fine. But we will bold and highlight the ones who were listed as First-teamers in that short span when the Hall of Fame website separated them.

So, rather than 48 players, the ones who were actually First-teamers totals seven. That is far more manageable.

So, while we certainly applaud the HOF voters for focusing on All-Decade teams because it is harder to make an All-Decade team than an All-Pro team or Pro Bowl team for that matter.

However, there are caveats. One is that sometimes a player starts his career in the middle of a decade his All-Pro span or "peak" performance may be split between two decades. Another issue is there are the mistakes we've spoken about, Another thing is is the focus of this post" First-teams are harder to make than Second-team and should be given extra cachet.

What should also be given extra cachet, if you will, is Player of the Year Awards, especially Defensive Player of the year Awards because so many defenders compose the group of players who have been overlooked. Not in every case, but offensive linemen, linebackers and defensive backs, in our view, have been the most "snubbed".

So we think plenty of these Second-teamers (not highlighted) are HOF-worthy and there are some players who never made an All-Decade team are also very HOF-worthy.

So, as long as it's not the end-all, be-all, we applaud the mentions of All-Decades. The HOF voters have a tough job and those ten slots will fill up fast and there will be HOF-worthy players who will not be part of the Centennial Class of 2020. We all need to accept that. There are more than ten senior pool players who are worthy so not everyone will be happy.

All we can ask is that the committees that are filled by HOF voters give it their best shot, use the best information available (which includes the accurate All-Decade teams the—the subject of this post) and that they avoid parochial or partisan interests. If they do that, it will be a great class of 2020.
Posted by John Turney at 3:19 PM