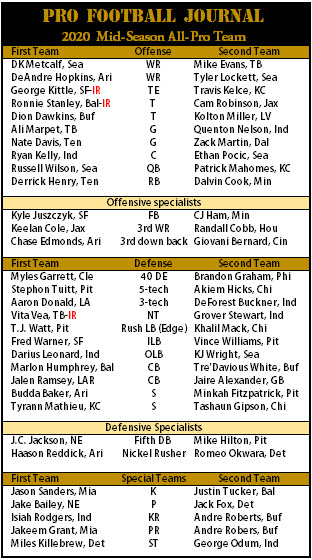 Three of our picks are out for the season, Kittle, Stanley, and Vea are out for the season. Since they won't be on the Pro Bowl or All-Pro squads at season's end we left them on.
Also, we listed base positions. We are fully aware that players move around, perhaps now more than ever. Starting corners play slot in sub defenses, Five-techs can and do play three-tech in nickel, outside linebackers can be a "Mike" in nickel, some safeties are more "box" safeties and others more middle of the field-types, some do both, and so on. Hey, it's just an All-Pro team and we take those things into account as much as possible.

Lots of off-the-ball 'backers were considered and we will keep a close eye on them to see if they surpass those we have now. They are Elandon Roberts, Mia, Roquan Smith, Chi, Devin White, ILB, Myles Jack, Jax, and Miami's Kyle Van Noy.

Leonard Williams, NYG,   Emmanuel Ogbah, Mia, Chris Jones, KC,  all solid interior rushers plus shade tackles  Malcolm Brown, NO, and  Danny Shelton, Det, caught our eye. The Broncos safety Justin Simmons got off to a slow start but is coming around.

Aaron Rodgers was our third QB and Tom Brady is fourth. It's early on linemen but we picked who looks good so far. We will see if any of these newbies can keep it up and supplant the usual suspect All-Pros.