By recovering two Viking fumbles and taking them to the end zone (on back to back scrimmage plays) Jeremy Chinn tied a 62-year old NFL record for "Most Touchdowns, Game (Opponents’ recovered)" that was set November 28, 1948, by  Fred (Dippy) Evans of the Chicago Bears against. Washington. He also ties an unofficial 100-year old record of Al Nesser (see Note below).

However, we are not sure but are pretty confident (based on odds) that Dippy's recoveries didn't come eight seconds apart (official clock time). 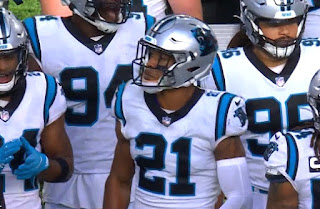 Now, this only includes the official record. According to research done by

Note:
Al Nesser recovered two fumbles in the end zone for touchdowns Sunday, October 3, 1920, when his Akron Pros beat the Wheeling Stogies 43-0. However, the NFL does not accept Nesser's achievement in their Record and Fact Book but we do.