In the early 1990s a company then-called Stats, Inc., now called STATS, began publishing run stuffs in their publications. It was simply this—tackles for loss in the run game tallied the same way sacks were tallied.
They, like us, felt that a stuff or tackle for a loss was a significant play, even if it was for only a 1-yard or 2-yard loss. If it was on a 1st and 10, it puts an offensive team 'behind the sticks' and 2nd and 11. Or if it's 2nd and 5 and it's a screen, and a 2-yard loss, it's 3rd and 7. And if it's 3rd and 1, then it's 4tn and 2.
However, as our second example (if it's a screen) STATS had one flaw in their metric—they tracked just running plays.
Nick Webster, one of our writers, picked up on that quickly, noted that with screen passes, tunnel screens, etc. that there were more and more passing plays that resulted in a loss, so he began tracking pass stuffs in his personal research.
In 1999 NFLGSIS, essentially the NFL official stats website began keeping track of tackles for loss (TFL) and they did include tackles for loss in both run and pass plays. But they also included sacks, which skews the TFLs towards the defensive linemen.
Also, they don't count TFLs if there was a forced fumble. Let's say Lavonte David blasts through the LOS and hits Alvin Kamara behind the line of scrimmage who fumbles. Then, say, Drew Brees falls on the fumble, and then say Ndamukong Suh falls on Brees.
In that case, Davis gets the forced fumble and Suh gets the tackle for loss. We get that the computer has to balance and the only way to do that is for Suh to get credit for "ending the play". But come on, what are we measuring here? David made the play and as a bonus, he forced a fumble. That's a twofer.
A player who forces a QB to fumble gets credit for the sack and the FF, not not the tackle or the tackle for loss. It's nuts. But through looking at the play through NFL replay or a careful reading of the gamebook we can find the plays and score them meaningfully.
The Webster/PFJ  protocol keeps it simple and measures what is important the way a coach might. And Webster is currently working on pre-1982 totals which are harder to find due to poorly written gamebooks but he's nailed down the post-1982 total stuffs which matches with the "official" sack era.
After ten games this season David has 6.5 stuffs, taking his career total to 105 stuffs to go with his 23 sacks. It's amazing that he's only received post-season honors three times in his career.
Here is the leader board updated through this weekend. David passed Urlacher, even though he's played just about 8½ seasons.

And when shown in a per-season chart, David is the clear leader. And this will rise because he has six more games to play. 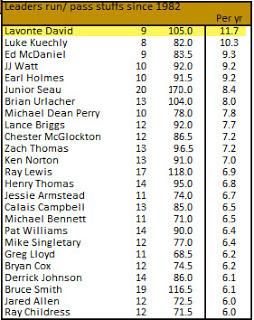 David was overlooked on the major All-Decade teams recently release, though he was First-team on ours and also on NFL.com's, and GridFe.com's teams. He plays a WILL position that is an off-the-ball spot that produces few sacks and the TFL or stuff stat rarely appears on television screens so many writers and fans are not familiar with it. That may explain some of the 'underratedness' of David.
Also, other factors play into it as well. Nonetheless, we've recognized David as a First-time All-Pro four times and a Second-team All-Pro three times in his nine-year career based on his run-stuffing skills and his ability to cover in both man and zone. Clearly the AP, PFWA, and SN voters don't agree.
That's fine, we'll take the heat. We think the film and the numbers back us up.
Posted by John Turney at 3:33 PM